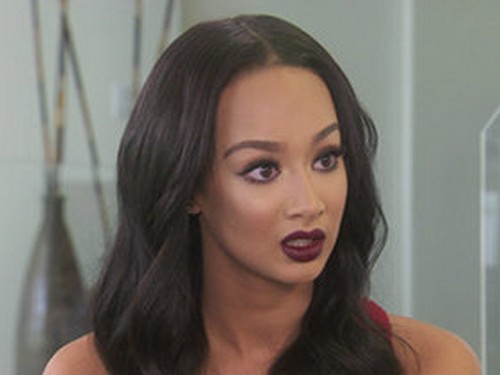 Monday night means that it’s time for VH1’s BASKETBALL WIVES LA! Tonight’s new episode is the reunion and the basketball wives reassemble in a reunion hosted by John Salley. Included are the ladies’ individual journeys in Season 3.

On last week’s episode a getaway in France continued in the Season 3 finale, but there was no French connection when an attempt to reconcile Malaysia and Jackie took an ugly turn. Also: Jackie launched her cognac; and Brittish received an unexpected present from her fiancé.  Did you watch last week’s episode?  If you missed it we have a full and detailed recap, right here for you enjoyment.

On tonight’s episode In the Basketball Wives Season 3 Reunion Special, things get heated when Sundy and Brandi show they haven’t forgiven each other since their explosive fight in Paris. Jackie reveals her final thoughts about the Orlando/ Draya/ Chantel love triangle and one cast member refuses to share the stage with the rest of the girl

Tonight’s episode is going to be filled with the usual Basketball Wives of LA drama and you won’t want to miss it, so be sure to tune in for our live coverage of the show tonight at 8 PM EST! While you wait for our recap hit the comments and let us know how excited you are about the new season of “Basketball Wives of LA.”

Draya won’t be able to make this reunion. After all the negativity from Sundy and Jackie this past season; she felt their fights had gotten so ridiculous that she didn’t even want to see them right now. But that doesn’t mean Draya won’t be heard on this reunion show.

Draya filmed an interview early on and slowly footage from that is being introduced in. So what was the first thing Draya had to bring up – the drama!

Thanks to Sundy and Jackie, Draya says the girls can’t even sit down to a calm interview anymore. There’s always an argument and the ladies are constantly threatening physical violence because of those two. Sundy isn’t surprised to hear Draya throw her under the bus. To be fair she saw it coming. Jackie on the other hand denies being this criminal mastermind that Draya accuses her of.

Draya’s interview doesn’t stop there though. Early in the season she had run into a problem with British.

The ladies were sitting down at the time when British took offence on Sundy’s behalf that Brandi was asking personal questions. Then she turned around and did the same thing to Draya. She asked Draya about the rumors of her being a ho. Since then Draya has called her a “midget” and recently called her “ratchet”.

British, for her part, realized that she was out of line with her question, but she feels like she doesn’t deserve to have Draya call her names. Especially seeing as she’s not the first person to call Draya a “ho”.

If anything its Brandi and Sundy that haven’t gotten over the same sit-down. Although Sundy wasn’t overtly offended then she is now. She didn’t like the way Brandi was asking about her relationship with her daughter. Sundy felt like it was none of the other woman’s business.

Back to Draya’s interview, for someone who refused to share the stage with the other ladies; she sure has a lot of things to say. Take the love triangle for instance. Draya felt like it was yet another ploy of Jackie’s to make her look stupid.

Jackie wasn’t close to her daughter, but she still try to use Chantal to make Draya look like the fool. Jackie and Chantal went around town claiming that Chantal had a fling with Draya’s boyfriend. However the story quickly changed when Draya brought said boyfriend in to speak with them.

Because of that Draya has sworn off Jackie and so has Malaysia. Malaysia said she just couldn’t keep going back to Jackie to listen to her lies afterwards. And that’s why she had officially ended their friendship. While Jackie felt like Malaysia was sitting on that for a good minute before she said it to Jackie’s face and so she admits that she thinks Malaysia has been playing her.

Noe by this point the audience started to say a few things to Jackie. It had actually gotten heated and the moderator had to threaten to throw people out if they didn’t calm down.

It seems no one is buying Jackie’s story. The only people on her side are Sundy and possibly British. Except for addressing Draya, British has pretty much stayed under the radar throughout the reunion show.

Yet she was asked about her fiancée, Lorenzo Gordon. He was last spotted with a young woman and the audience wanted to know what happened. So Lorenzo came out onstage to answer questions.

Lorenzo said nothing happened with that woman, but “nothing happened” translates into him giving her a newer and bigger engagement ring to replace the last one. He said it for all the foolishness he did early on in their relationship. As if anyone believes him!

British wasn’t the only one that ran into trouble with her man. Malaysia had a twitter fight with her husband after she felt he wasn’t supporting her enough. She just lost a sibling and when her husband refused to be as understanding as he could have – Malaysia lashed out online.

Draya then brought up Sundy in her interview. She called her all sorts of names and no one believes her more than Brandi. Sundy tried to say her fight with Draya was mostly Draya’s fault – she was the one that’s low down dirty, but Brandi won’t let her. Brandi knows what kind of woman Sundy is and the two got into a heated argument up onstage.

The argument nearly got physical when security luckily stepped in. Once people started getting out of their seats though; some audience members also tried to join in. And so when the show returned from a much needed commercial break, only Malaysia and Brandi were onstage.

They talked about their incident with Sundy. When Sundy brought up Brandi’s infertility on the show it could have also resulted into a fight back then as well. But Malaysia had intervened. She said she didn’t want put her friend at risk with a woman that’s already had a child for money. You never what that woman would do next.

Then when they left the stage – Jackie, British, and Sundy returned. They do feel sorry about the cancer and in-vitro comments. Sundy was upset by it, but she says when she gets into an argument then it’s no holding back. That’s just who she is.

Some of the women will back next season while others have left door half-open. Who did you wish next season?