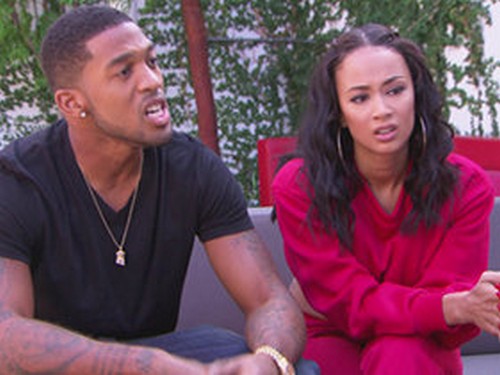 Monday night means that it’s time for VH1’s BASKETBALL WIVES LA! On tonight’s new episode Jackie and Chantel try to put issues involving Draya behind them. Elsewhere, Jackie invites the ladies to a getaway to France.

On last week’s episode Jackie developed a bottle for the cognac brand she hoped to launch. As payback for her experience in Palm Springs, Draya hosted all the ladies at an excruciating Mud Run. And Jackie forced a meeting with Draya to clear her daughter’s name.  Did you watch last week’s episode?  We did and we recapped it right here for you.

On tonight’s episode Jackie and Chantel are over the situation with Draya and her boyfriend Orlando, but Draya and Orlando aren’t done yet– they confront the ladies in an attempt to put the issue to rest. Jackie invites the group on a trip to France to launch her cognac, but things are tense as Malaysia is suspicious of Jackie’s motives.

Tonight’s episode begins where we left off last week. Draya, Chantel, and Jackie are talking over their issues that stem from Draya’s man, Orlando. Chantel feels like her mom does not have her back. They really don’t seem to resolve anything.

Draya meets up with Brandi to discuss their friendship. Draya was still feeling hurt about Brandi’s comments about them being more acquaintances than friends. Brandi opens up to Draya, but Draya feels like Brandi should not have been talking about their relationship to other people, especially Jackie and Sundy. Both ladies talk about the group’s problems and how they cannot seem to all be cool with one another. They leave things on a good note.

Chantel and Jackie meet up and talk about the meeting with Draya. Jackie tries to explain why she set up the meeting. She wanted them to talk things out. Chantel feels like her mom is trying too hard to be friends with these ladies when they keep burning her. Jackie is not happy with how Chantel handles the Draya meeting. Jackie says she will always defend her daughter but Chantel doesn’t feel she did a good job of it.

Jackie and Sundy meet with the executives helping her with her cognac. Jackie shares the names she came up with. She actually shares Gold Showers, still not realizing what it really means. They give her the idea to simply use her name. They explain that they will be inviting Jackie and crew to France in order to taste the cognac so that she can personalize her brand. Sundy and Jackie are so happy about the trip.

Back at home, Doug laid out the rose petals and has the champagne ready for his loving wife as she walks in. It isn’t an anniversary they are celebrating, however, Doug is trying to make what is about to drive Jackie crazy into something a little less stressful. He breaks the news that Malaysia called him. And not the Jackie friend Malaysia. He is asked to participate in a big game in Malaysia. Jackie is pretty stressed out as they normally travel together and are never apart for more than one day. Jackie is concerned about the aggressive women there as well. Jackie shares the news about going to France. Doug is very happy for her.

Jackie meets up with Malaysia and Brandi at the bookstore, but she is not sure how the tone will be since she’s been having problems with Draya. She invites both ladies to join her in France and they happily oblige, She shares that she is not sure if she’ll be inviting Draya. The ladies try to establish some ground rules about their trip. As they leave in a very excited mood about the trip, Brandi takes off one way, while Malaysia and Jackie walk the other. Malaysia, suspecting there is some hidden agenda, cuts to the chase and asks Jackie what she is up to. Malaysia is upset about how Jackie has been treating Draya and wants to know the real deal behind her issues with Draya. Jackie tries to defend Chantel again and shares that she really only wants to make peace. Jackie confirms that she really does care about Draya, but Malaysia is still a little skeptical.

Later, Jackie meets with Chantel and as they are sitting in the restaurant talking about France, Draya walks in with Orlando. Orlando starts the conversation in a pretty aggressive way. He comes right at Chantel because he is sick of lies being told about him while he cannot defend himself. While Orlando begins arguing with Jackie, Chantel starts taking her earrings off. Jackie tells Orlando to kiss her ass after saying that no one even knows who he is. The argument is getting heated. When Orlando tell Jackie that she is not his f’ing mom she goes nuts. Jackie still believes Chantel even though everyone seems to have a different story. Chantel still says she did not get together with Orlando’s friend after he calls her on it. Then when Chantel calls Orlando out on lying about a party they attended, he shakes his head but never admits to anything. Draya and Orlando finally leave feeling like they came out on top with this one. Meanwhile, Jackie and Chantel are still heated and call Sundy to join them. Sundy arrives and hears the story of what happened and cannot believe Orlando handled things that way. Despite everything, Jackie is still considering asking Draya to go to Paris with them. Chantel is still really upset as they leave.

Next week will be even more explosive when the Paris trip commences.