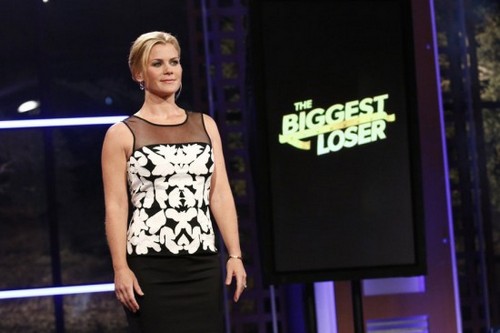 Tonight on NBC The Biggest Loser returns with an all new Thursday October 2, season 16 episode 4 “the Lottery.” On tonight’s episode a lottery challenge takes place, in which one contestant is selected to go home with a trainer for the week—and the chosen person’s weight will be the only one that counts for the team’s weigh-in. Meanwhile, the remaining contestants try to keep up with their plans at the ranch without their trainer; and two eliminated players compete at Comeback Canyon.

On last week’s episode week three began with the contestants competing in two challenges to gain pound advantages at the weigh-in. The first challenge tested their nutrition knowledge, with their trainers consuming food for each incorrect answer. The “Wall of Glory” was revealed in the gym, showing contestants when they were top athletes, inspiring them to work ever harder in the gym. Then trainers Dolvett Quince, Jessie Pavelka and Jennifer Widerstrom helped out at an endurance challenge before a weigh-in determined who would be headed to the surprise “Comeback Canyon” location with trainer Bob Harper and which of Bob’s two eliminated contestants would be headed home. Did you watch last week’s episode? If you missed it we have a full and detailed recap, right here for you.

This week kicks off with a “Lottery Challenge,” where one contestant is randomly chosen to go home with their trainer for the week. But the pressure is on when they find out their weight will be the only weight that counts for their team this week on the scale. While the chosen contestant deals with the emotional issues at home that caused them to gain weight, the remaining team members try to stay on track at the ranch without their trainer. Later, the two eliminated contestants at “Comeback Canyon” compete to stay there one more week, while the ranch weigh-in finds one player making the ultimate sacrifice for their team.

The Biggest Loser season 16 episode 4 airs at 8PM on NBC and we will be live blogging it with all the up-to-the-minute details. So make sure to come back to this spot and spend the evening with us! Make sure to refresh often to get the most current details and updates!

Chandra gets a second chance at being on the show. Now she has to compete with Emmy.

The contestants compete in a Biggest Loser lottery. The winner of the lottery has to go home for a week, and they will have to represent their whole team at weigh-in when they get back. The red team is revealed to be safe first, then the white. The person who ends up being sent home is Damien. “This is a business trip,” he says. He wants to see his family, but will keep his eye on the goal.

Damien is met with cheers as he comes back home to his family. “I feel blessed to be home, and feel their presence around me,” he says. He introduces everyone to Jessie, his trainer. Damien announces to his family that although it is fun to see his family, he has to represent his team at the weigh-in and that this is a business trip.

Jessie puts Damien to work to make sure he reaches his goals. He puts him through footwork drills. Lori talks about the team feeling like a “fish out of water” this week with their trainer gone.

Bob is worried about Chandra and is determined to push her hard. He’s disappointed that she weighs over 300 pounds and lost only 1 lb. at the last weigh in. “Not on my watch,” he says.

Damien talks to Jessie about his grief and guilt over his mother’s death. He’s tormented by the fact that he didn’t tell his mother he loved her as much as he should have when he had the chance. Jessie tells him to talk to his mother as if she were there. Damien tells his mother that he loves her and wishes he had one more moment. Damien wants to move on from this because he knows that’s what his mother would want. “Now we know where we need to focus, and that’s Damien letting go,” Jessie says.

Everyone has their last chance workout. Dolvett is satisfied with how the red team is performing as they train in preparation for the next weigh-in. Jen is worried about her team getting complacent due to their previous success, and is wondering when that time will come. Jessie gives Damien a hard last push.

Chandra and Emmy face off at the scale. “I felt really motivated this week, and I feel really good,” Emmy says. Emmy has lost 4 lb., losing 1.65% of her total weight. Chandra needs to lose 6 lb. to beat her. She has lost 7, beating Emmy and getting to stay. Chandra didn’t believe she could lose even 6 lb. “Knowing I get another week to prove myself is amazing,” she says.

The teams weigh in. Damien loses 14 lb., pushing his team to safety. The red team loses, and Blake is safe because she lost the highest percentage out of her teammates. Mike asks his team to vote for him to put him up for elimination, but Rob nominates Jordan. Everyone else still votes for him, and he is eliminated. “Sometimes you have to lead by example, and I hope I have led a good example,” he says. “I came here simply to fulfill a promise to my son, and I think he’d be proud of me.

Emmy has lost 50 lb. since leaving the show. She also serves her children healthier food, and her family is so much more active now that she has signed them up for one 5k a month. “I’ve never felt stronger or healthier than I do now.” Thanks to The Biggest Loser, she is 10 lb. away from her weight as a sophomore in high school.