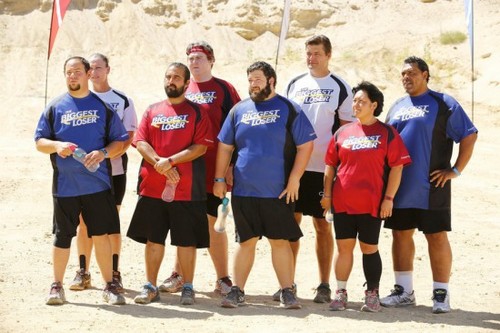 Tonight on NBC The Biggest Loser which features over weight contestants competing to lose weight to win money returns with an all new Thursday December 11, season 16 episode 12 called “The Playoffs” and we have your weekly recap below. On tonight’s episode, the teams disband and the players compete on their own for the first time in an obstacle course, with the grand prize being immunity. Later, the trainers surprise the players with videos featuring words of encouragement from loved ones.

On the last episode, it was all about teamwork as the eight remaining contestants had to work together to lose at least 50 pounds collectively so everyone could remain at the ranch for another week. If they didn’t reach that goal, someone would be sent home. A sand pile challenge that required a big team effort gave the players the opportunity to win a substantial weigh-in advantage. Later, while hiking with their trainers, the contestants took time to celebrate their accomplishments and vocalize their intentions as they moved forward on their weight loss journeys. Meanwhile, at Comeback Canyon, two fierce competitors vied for the chance to stay one more week with trainer Bob Harper.  Did you watch the last episode? If you missed it, we have a full and detailed recap right here for you.

On tonight’s episode as per the NBC synopsis, “Host Alison Sweeney surprises the contestants with the news that this week they’ll be competing as singles, rather than as teams. In their first challenge as singles, the players must cross an obstacle course, including a mud pit, and complete a memory puzzle at the end for the greatest prize of all at the ranch – immunity. Then trainers surprise the final seven contestants with heartwarming videos of support from players, coaches and family members back home, fueling their fire to keep working hard at the ranch. Later, after a fiercely competitive week at Comeback Canyon, trainer Bob Harper sends one player home for good, while the ranch weigh-in results in a tearful elimination as the contestants vote to send another player packing.”

The Biggest Loser season 16 episode 12 airs at 8PM on NBC and we will be live blogging it with all the up-to-the-minute details. So make sure to come back to this spot and spend the evening with us! Make sure to refresh often to get the most current details and updates!

On The Biggest Loser, they’re down to the final seven. Scott pulls up in his limo and is shocked to see Bob Harper waiting on him. He’s stunned as Bob explains Comeback Canyon and how he’s got an extra week to try and get back in the game. He goes inside and sees Damian there. Bob tells him Damian has won two weigh ins in a row. Bob says he’s thrilled to have two NFL athletes training under him.

Ali welcomes the contestants to week 12 and says they’ve all done well. She says they are all now officially in the play offs and will begin competing on their own. She flips open a box and it shows different colored t-shirts. She says they’re going to compete on their own. The #BiggestLoser people are excited. They get their single shirts.

They head to the gym and everyone gets on the treadmills and start working. Jessie encourages them all to work harder since last week’s numbers were not great. Dolvett is pushing the contestants harder than ever. Jen tells them no one is safe from the yellow line and they can’t slow down. Rob is having trust issues since there are five white team members left.

Jessie tells him to focus on the bigger picture and not let this get the best of him. They all head out to the immunity challenge – their first as singles. Sonya says it looks interesting Ali explains it’s a track and field event Biggest Loser style. They have to race through lanes with mud and hurdles and memorize a patterned color to repeat once they race back.

She says the winner gets immunity. Lori has been medically cleared to participate, but can’t run. They start and have to crawl through mud under obstacles and then over a second wall. Toma and Jordan make it to the color palette first. It’s a display of a square made of 16 smaller squares of color. Sonya thinks this looks terrible.

Toma, Jordan and Woody race back to try and repeat the pattern. Toma misses eight. Jordan misses almost all. Lori misses just three and heads back to try and figure out what was wrong. Sonya misses nine and heads back. JJ is feeling confident with his a little at a time approach. Woody misses four and can’t tell what he has wrong. Lori puts her pegs in and wins it!

That gets Lori into the top six and Ali tells them all she’ll see them at the weigh in. Over at Comeback Canyon, Bob has set up a Biggest Loser combine. This is a play where collegiate prospects test their skills when they’re in the recruitment process. Scott is off at a run doing wind sprints. Damian and Scott are both working really hard.

Scott and Damian are both enjoying the competition. Damian says Scott is the biggest competition he’s faced there and is determined not to let Scott beat him. Bob tells them they are changing their futures right now working this hard. At the main house, the coaches come in and say they have lots for them from home.

Rob’s rugby team recorded a great message of support from him. They say #TeamSkinnyRob. Sonya’s students she coaches have made her a message. Jordan’s dad and his former baseball teammates made his. Lori’s Olympic softball coach does hers along with Jenny Finch, her former teammate. Woody gets a message from his arena football teammate.

JJ gets one from his high school and college football teammates. This makes him tear up. Toma gets one from Frank Klopas, a soccer player that he’s a big fan of – he tells him to never give up. Dolvett wants to get Toma off the ranch and remind him why he’s here after his weight gain last week. They head to a soccer field to play around. He and Dolvett start a little scrimmage and Toma does great sinking goal after goal.

We see Antoine and Alexandra from season eight who are still together. We see them take a dance class and then they offer a message about getting moving if you need to lose weight. Bob has Damian and Scott ready to weigh in at Comeback Canyon. He puts Scott on the scale first. He steps up – he was at 268 down from 366. His current weight is 259. He lost nine pounds.

He tells Bob that feels great. He lost 3.36% of his weight. Next up is Damian who needs to lose 10 pounds to win this. He steps up – he started at 388 and his previous weight was 295. His current weight is 293. He only lost two pounds which means he’s lost to Scott. Damian says if he has to lose, he’s glad he lost to Scott.

Bob tells Scott that he could possibly be a finalist and get back to the ranch. Damian steps down from the scale and he says this opportunity was exactly what he needed to turn his life around. We see scenes of him throughout his training while he talks about all the confidence he gained while he lost 95 pounds. He says the next time we see him, he’ll be living his glory days.

It’s time for the singles weigh in over at the ranch. Ali says the two players with the lowest weight gain will be below the yellow line. Lori has immunity and weighs first. She’s lost three pounds and drops down to 240. Next is Woody. He was at 398 when he began and is now down to 306. He’s lost nine more pounds.

JJ gets up next – he started at 392 and weighs in at 300 pounds. He lost six pounds and is angry because he really wanted to be below 300. Jen tells him not give that one pound too much power. Sonya is next and is at 197 but needs to lose more than five to be safe. Her current weight is 189 – she lost eight pounds and is overjoyed.

This means he’s lost 101 pounds in total and puts him in first place. JJ has fallen below the yellow line and is visibly upset. Last is Rob to see who else will be below the line. Rob goes up to weigh in. He started at 483 pounds and needs to lose 10 pounds to stay in. He weighs in at 350. He lost a whopping 15 pounds which makes him safe.

He says it’s amazing how much he’s lost and Jessie tells Rob he can see that he’s starting to trust himself and tells him he believes in him. That puts Rob in second place and leaves Woody and JJ below the yellow line. Ali tells the two of them they are up for elimination tonight and that the others have to decide who’s going home.

They head into the kitchen to talk. JJ and Woody are besties and they are both at risk. Ali meets with the group. Toma says he cares for both of them and says he’s worried about Woody going home alone and says he chose JJ because he has a better support network at home. Jordan says he sees it the same way and also chose JJ. One more vote and he’s eliminated.

Sonya is up next and she’s crying. She says she based this solely on weigh in and chose JJ. She tells him she’s sorry. She’s full-on crying. Woody hugs JJ who is also full-on crying. He says he thinks the votes turned out the way they should have and says Biggest Loser has been an amazing opportunity for him.

Ali says JJ isn’t the only person leaving tonight and says they’re going to Hawaii. The group was terrified and now they’re thrilled. JJ leaves the ranch and says at least he’s going home to family that cares about him. He sees Bob open his door and is totally shocked. Bob tells him it’s not over.

We see Damian is down a ton of weight as we see him at home with his kids. He says he feels like a new man and has a new job as a football analyst. Jay Crawford tells Damian he almost didn’t recognize him. Herm Edwards says they were all proud of him watching him on the show. Since being home, he says things have changed.

We see him playing with his kids in the yard and says he’s the type of father he wants to be. Nicole, his wife, says it’s amazing what he’s done for her and the kids and Damian thanks Biggest Loser for giving him a new lease on life.

They then show us a profile of season 7’s Damien Gurganious who passed away in late November as a result of a rare auto-immune disorder.