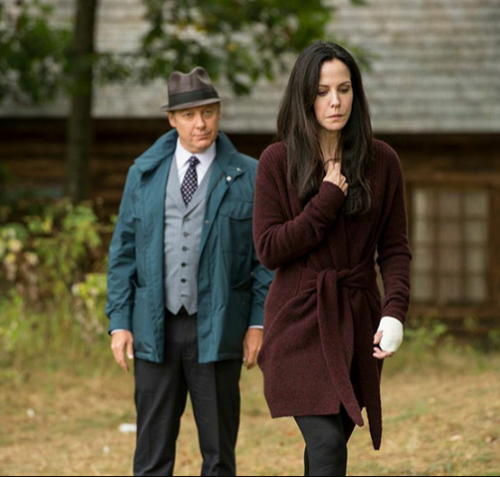 On the last episode when a man was found with his heart cut out, Agents Keen (Megan Boone) and Ressler (Diego Klattenhoff) teamed up with agent Samar Navabi (Mozhan Marno) to uncover the intricacies of Dr. Covington’s (guest star Ron Cephas Jones) black-market operation. Meanwhile, Red (James Spader) and his associate tried to capitalize on a new opportunity in Indonesia, leaving Reddington in a vulnerable position. Did you watch the last episode? If you missed it, we have a full and detailed recap right here for you.

Tonight’s episode of The Blacklist kicks off with a woman standing in a street in front of a bank aving a panic attack. She heads inside, and cries to the teller that she has a second job interview tomorrow and isn’t receiving unemployment anymore. He tells her it is “out of his hands.” She heads to her car and takes a gun out her glove compartment and rushes in to the bank shooting at everyone inside.

Red is in the cabin with his wife arguing, he demands to know where their daughter Jennifer is. His wife Naomi informs him that she will never tell him where her daughter is. She just wants to go home to her husband, Red says that the arrangements have been made and he has a new life and passports for her and his wife. Dembe arrives with Naomi’s husband and she rushes outside to greet him.

Liz calls Red and demands to know where Naomi is and why he is hiding his wife from her, she wants to debrief her about Berlin. Red changes the subject and asks Liz what she knows about social-psychology. He thinks the government is still experimenting with mind control and manipulating people’s surroundings to see if they will react as predicted.

Liz briefs her team and says a middle school teacher, a construction worker, and then Maddie recently robbed a bank. She thinks the government may have funded the experiments to drive them to do the crimes. Liz and Ressler head to the mental hospital where Maddie is being held. Her psychiatrist says that Maddie is full of excuses and reveals that her life just fell apart. First she lost her job because people were leaving fake reviews on Yelp about her poor customer service. Then, someone called social services and left anonymous tips that she was abusing her step-children, so her boyfriend Charlie took the children and left her. Without a job, she started making late payments on her mortgage, so the bank had to foreclose on her house.

Liz has a theory, all three of the victims/killers have a genetic disorder and a gene called the “Warrior Gene.” People with said gene are known to act out more aggressively or violently than others. She thinks that government has genetically profiled people with the Warrior Gene and driven them to their breaking points to see how they reacted.

Meanwhile Dr. Creel, the psychologist responsible for driving the people to commit murder is sitting in his office pulling out his hair and talking in to a recorder about his case studies. He picks up the phone and calls Senator Sheridan.

There is a shooting on the freeway, and afterwards Liz discovers that the shooter also had the Warrior Gene. She founds 11 other cases over the past two years. Harold calls Liz in to his office and tells her to shut the door, he reveals that Reddington was right. Sub-Project 7 is funded out of the DIA by black budgets.

Liz and Ressler visit Senator Sheridan, he says that they do study mind-control, but it never works. She knows that he oversees Sub Project 7 and requests that he hands over all of his research, he says he is glad to and will have it sent over to Harold.

Naomi is trying to reason with her husband Frank. He doesn’t want to run away and start a new life, and he thinks Naomi is crazy to put their lives in Red’s hands. They head back in to the cabin and inform Red that they are staying in Philadelphia. He warns them that they are making a huge mistake.

Liz receives the Sub-Project 7 files and realizes they are useless because they are all in code. Reddington takes her to a guy he knows named Hascal who can break the code. He has files and photographs on Sub Project 7. He explains that the government originally started the project because they were trying to find ways to genetically determine who would wind up evolving in to a killer by their DNA. Liz takes a photo of Dr. Creel back to the office and they are able cross-reference him with all of the killers from the last few months.

In the cabin Naomi lays down and takes a nap, and Red takes Frank for a walk. He says that he looks at Naomi as more than a sister than a wife, but he doesn’t like Frank putting her life in danger. A car pulls up and Frank is shocked to see his mistress Monica’s dog hop out of the car. Red tells him that from this day forward he isn’t allowed to see Monica anymore, and he is going to accept his new identity and move her out of Philadelphia.

Liz goes undercover as a crazy woman named Angela, who was rushed to the ER after putting her hand through a window while fighting with her husband. While Dr. Creel looks over her psych file she confesses that her husband left her and if she got a chance to see him again she would kill him. She describes in detail a plan she has to find her husband Tom and chain him up and force him to tell her the truth about all of the lies he told her. Elizabeth says that her father was killed in a fire when she was four, but she can’t remember what happened. Creel gives her a form to fill out and steps out of the exam room, she rummages through his briefcase and hacks in to his laptop and gets his password so that they can access his files from the office.

They find out that the next patient he is turning in to a killer is a loose cannon teen named Duncan. Liz and her team head to Duncan’s house and realize that he is gone, and he has taken a loaded gun with him. They realize that Creel has set him up with a fake online account and has lured Duncan to a gun conference where Senator Sheridan is speaking. While Creel is arguing with Sheridan, Duncan shows ub with his guns. Creel reveals to Duncan that his online girlfriend doesn’t exist and he made her up. Liz and Ressler show up as Creel is begging Duncan to kill him so that his research will be honored and examined. Duncan shoots Creel and Liz rushes to his side, but Creel stands up and pulls a gun on her and takes her hostage. Suddenly a sniper from the roof that shorts and kills Creel, but the shooter isn’t with Liz’s team.

Liz has her people track down Naomi and Frank’s phone records and she locates Naomi and pays her a visit at the cabin. Naomi invites her in and Liz says that she has questions about the past. Naomi insists that Red is just using her, and it is a game he plays with everyone. He is using Liz to get to something he wants. Naomi is about to tell her what it is that Red wants form her, and Red walks in and interrupts them.

Red escorts Naomi and Frank to their car and hands them over their new ID’s and passport, before Naomi leaves she reveals to Red that she has no idea where Jennifer is, she left years ago and never came back. Before Naomi leaves, she warns Red that he needs to tell Liz the truth.

Liz sits down with Red, and she knows he hired the sniper to protect her. She wants the sniper gone and off her tail, Red jokes that Liz must be hiding something. Liz heads home and sits in a lawnchair drinking a beer and staring at a door with a padlock on it.