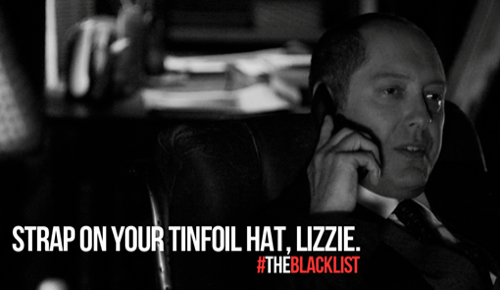 Tonight on NBC the criminal drama, THE BLACKLIST starring James Spader continues with an all new Monday October 20, season 2 episode 5 called, “The Front.” On tonight’s episode the team targets an eco-terrorist cell seeking a deadly weapon. Meanwhile, Liz attempts to lose her guardian, and Red resorts to manipulation to pursue a special someone.

On the last episode after a series of seemingly nonviolent citizens became killers, Red (James Spader) tipped off Liz (Megan Boone) that a dangerous social-psychological experiment may be underway. Elsewhere, Red tried to convince, Naomi (Mary-Louise Parker) and her husband into accepting a complicated proposition. Diego Klattenhoff, Mozhan Marno, Amir Arison and Harry Lennix also star. Did you watch the last episode? If you missed it, we have a full and detailed recap right here for you.

Tonight’s episode of The Blacklist kicks off with a distressed woman calling for help, she tells her friend to come alone but she brings a man with her. While he is trying to wrestle her bag away from her she is hit by a taxi. He grabs something out of her bag and then runs away as pedestrians come running to the woman’s aid.

Elizabeth pays Red a visit, he says Carrie Ann Beck was hit by a cab this morning. Liz is confused because Carrie Anne and her husband Maddox, leaders of the front, were supposed to be dead. Red says they were just living off the grid, and he thinks her husband Maddox killed her.

Elizabeth and Ressler head to the hospital, and learn that Carrie Ann is officially brain dead. But, she was thirty weeks pregnant and they were able to save the baby. The doctor says that Carrie Ann was in a fight and sustained previous injuries before the car accident. They also found clay under her nails that is over 700 years old, it matches the clay used on a 14th century painting that was just stolen. The interesting thing is, the painting that was stolen out of the collection is the least valuable – Liz doesn’t understand why they chose that painting to steal. Meanwhile, Carrie Ann’s husband Maddox has the painting he stole out of Carrie’s purse in a dark room. He’s taking the painting apart and taking photographs of it. He hangs them all up on a wall and seems to be piecing together a puzzle.

Red heads to the DMV and gets in to a screaming match with one of the employees named Glenn. He has employed him to find a girl. Glenn breaks down, and confesses to Red that his mom has cancer. Red isn’t buying it, every time he doesn’t come through he always makes up a story about some major tragedy in his family.

Ressler and his team get a break when they get photos from the museum where the painting was stolen and realize there are hidden images behind the painting. They call in a specialist to look at the hidden images and she reveals that they are a map, about a legend in the 14th century about a plague that is believed to be called the Black Death. In order to prevent Armageddon, four priests took the strain to the end of the world, and the map leads to the location of the plague. They think that Maddox is using the map to find the plague.

Red calls Liz, and she meets up with him and the specialist that was at their office. Red explains that the specialist withheld information from Ressler. She reveals that the map leads to a native American burial ground in Staten Island. The bones in the burial ground contain the DNA of the plague, and once Beck finds the bones he can duplicate the plague. Ressler and Liz rush to the burial ground but they receive a phone call and learn that Maddox has beaten them to it and the Staten Island police have called in a grave robbery. But, there is a catch, whoever was buried there 100 years ago was moved. There was just a marker left in the grave with a code written on it that says the body was moved 31 miles East. Lis and Ressler head 31 miles East and realize that the plague body is stashed in a church.

Meanwhile back at the office Red pays Rob a visit. He gives him a photograph of a girl, and tells him he needs to find it. But, he doesn’t even know her name. Rob is skeptical that he can find her, seeing as how none of Red’s other people have been able to find it.

Liz finds Maddox in the basement of the church in a hazmat suit, he has the bones and is trying to leave the church. She is holding Maddox at gunpoint when his partner sneaks up behind her and hits her over the head. Maddox makes his getaway with the plague.

Rob rats Red out to Elizabeth, and reveals that he has him looking for a girl. Liz storms into Red’s house and informs him that the FBI is not handling his personal business and he has no right to look for his daughter after he abandoned her years ago. Red jokes that she is just jealous, and is afraid that his daughter might ruin their relationship. She storms out and as she is leaving she orders Red to get rid of the man he has following her.

Liz hires a double to go back to her hotel room and strip in front of the window, Red calls the man he has following Liz and he reassures Red that he can see Liz in her room. Red says that he thinks Liz is hiding something from him. Meanwhile, Elizabeth is sitting in a lawn chair in what looks like a boiler room, a man comes out of a huge door and tells her that it isn’t a good idea for her to be here so late. Liz ignores him and says she needs to go inside, and heads through the big door.

Maddox infects his followers and sends them out in to the streets. The next day the break-out hits the city, and hundreds of streets are shut down and quarantined. They locate patient zero, and start running tests on the patients’ cells to try and determine a cure for the plague.

Red gets a call from the DMV, Glenn says he aged his girl’s picture and found her. He hands him over a file, and says that she is hiding behind the name Zoey D’Antonio.
Ressler and Elizabeth are able to locate the lab where Maddox altered the plague so it was uncurable, they find a map on the coputer and realized that he was sending all of his infected followers to airports to get on planes and spread the disease to other cities across the country. They call the FAA and shut down all of the flights that the Maddox’s men have boarded. Everyone on the flights have to be put in to quarantine until they are able to find a cure.

They hunt down the last of Maddox’s men at a DC airport, when Samara is tackling him he sprays the plague in to her face and then shot her. Liz comes to her rescue and takes down the infected man, and puts pressure on her wound. Samara argues that she is going to be infected too. They are locked in a room at the airport and put in quarantine. Rob calls Red and warns him that Liz and Samara have been infected.

Red tracks down Maddox where he and his followers were living in a barn, Red laughs that he sent all of those people out to spread the plague, but he and his girlfriend are staying behind and hiding out and avoiding the Armageddon. He knew that Maddox would have created a cure to save himself in case he got infected. Red takes the cure and leaves just as police are arriving, because they finally tracked down Maddox too.

Red takes the cure to the hospital and sits by Liz’s side as she is treated. She is unconscious so he holds her hand plays music for her on his I-pod. Once the cure is administered to all of the quarantine patients, the quarantine is lifted. Carrie Ann is taken off from life support and Ressler is ordered to notify her next of kin. Liz wakes up and heads to the nursery and looks at the babies and has flashbacks of her and Tom. Red watches Zoey D’Antonio from across the street of a café where she works.