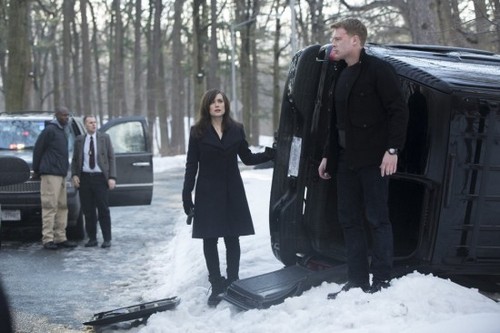 Tonight on NBC their new criminal drama, THE BLACKLIST starring James Spader continues with a new episode called, “The Judge.” On tonight’s show Red targets a past associate, a crime lord who then seeks revenge after escaping from prison. Elsewhere, Tom confronts Jolene.  Did you watch the last’s episode? We did and we recapped it right here for you!

On the last episode when a prominent Prosecutor was found after being missing for 12 years Red (James Spader) believed that this was the work of Ruth Kipling (guest star, Diane Wiest) also known as “The Judge.” Meanwhile, Red investigated the woman who tempted Tom (Ryan Eggold) while in Orlando at a teacher’s conference. Megan Boone, Diego Klattenhoff, Parminder Nagra and Harry Lennix also star.

On tonight’s episode the next target on the Blacklist is one of Red’s (James Spader) past associates, crime lord Mako Tanida (guest star Hoon Lee). After Tanida escapes from prison he is out for revenge. Elsewhere, Tom (Ryan Eggold) confronts Jolene (guest star Rachel Brosnahan) after interfering with his mission. Diego Klattenhoff, Megan Boone, Parminder Nagra, and Harry Lennix also star.

Tonight’s episode of The Blacklist begins in Tokyo, Japan. A prisoner is escaping form a Japanese jail. Meanwhile in Tokyo, FBI Agent Ramos checks in on his wife and kids and says goodnight. He sits down at a table, and the escaped prisoner snatches him out of his own house. He takes him to a location and reveals that his name is Marco Tanita, and he was collateral damage and wound up in prison as a result of Ramos’ quest to conquer Raymond. He gives Ramos a sword and tells him to ram it through his stomach, he promises Ramos if he kills himself he will not hurt his family, Ramos agrees and kills himself.

Tom walks into his kitchen and finds his wife talking to Jolene, Jolene and Tom pretend they have never met each other.

Agent Maguire, Pete, and Donald attend Ramos’s funeral and discuss who they think may be responsible. Although it looks like Ramos committed suicide, they are certain Reddington must have been involved.

Donald secretly meets up with Reddington, and he denies being involved in Ramos’s death. Reddington reveals Tanita escaped from prison, he thinks Donald is in danger. He warns him that Tanita is vengeful.

Meanwhile Agent Maguire runs into Tanita, who has made it to the United States. Maguire suffers the same fate as Agent Ramos.

After Maguire’s death Donald and his team hold a meeting to try to determine where Tanita is, they realize that Tanita has a younger brother that was running his operation while he was in prison. They set out to track down Tanita and his brother.

Donald rushes home to talk to Audrey, he is afraid she may be in danger. He explains that Pete Maguire is dead and they have to get out of the house.

Tom reveals to Jolene that he thinks Reddington was funneling money through the adoptive father for years. Jolene checks out Tom’s extensive map of photographs and diagrams. They leave his office and a man photographs them walking out together.

Donald reveals to Audrey that he thinks someone from Japan is after him. While he is explaining to her why he has to take her somewhere safe, a car runs them off the road and begins shooting at them. Donald fires back and kills one of the men, Audrey climbs out of the car and is shot. The other hitman gets away when Donald rushes to Audrey, and holds her while she dies in the street.

Cooper tells Donald to takes some time to grieve, and gives him his word that they will track down Tanita. Donald leaves and sits down with Billy and asks him what information he has on Tanita. Billy tells him the only way to find Tanita is by asking Reddington. So, Donald meets up with Reddington. Reddington tells Donald to “go home.” Donald declares he is not turning back. Reddington gives Donald the address to an underground hospital, he says one of the men that he fought with may have gone there after Audrey’s death to get fixed up.

Donald invites Billy to go to the hospital with him, and he tells Billy if he finds anyone associated with Tanita he will kill them. They barge into the hospital and one of the men that shot Audrey is being operated on. Donald shoots him in the leg and he gives him an address to where Tanita is staying.

Meanwhile Reddington’s goon tries to snatch Jolene like he was instructed to do and bring her in to Reddington. Tom takes out the goon and saves Jolene.

Elizabeth pays Red a visit and asks him where he sent Donald. The FBI want to find Tanita before Donald gets to him and gets himself killed. Red reveals that Tanita’s brother was killed the day that Tanita went to jail, and someone on the inside has been working with Tanita and running his empire for him. Elizabeth heads back to the office and she and the other FBI agents put two and two together realize Billy is dirty and he is working with Tanita.

Meanwhile Tom has Red’s goon tied up to a chair and his questioning him, Tom thinks Red sent him but the man won’t answer any questions. Tom tells Jolene that she has been compromised and tells her to call his wife and tell her she is leaving town. After Jolene hangs up, Tom kills her and Reddington’s man.

Billy and Donald capture Tanita, and throw him in the car. Tanita begins cursing out Billy and says that Billy killed his brother and stole his business. Billy shoots Tanita and the car goes off the road and crashes. Donald wakes up in the totaled car, and sees Billy in the distance trying to run from the crash, but he is obviously hurt. Donald climbs out of the car and follows Billy.

Elizabeth reveals to the FBI team that Donald is “off the grid” and he has picked up Tanita. They think they may know where he was headed.

Donald holds Billy at gunpoint, Billy tries to remind him that they are best-friends. Donald reveals to Donald that he has been working with Reddington, and if he hadn’t been shot protecting Reddington he wouldn’t have gotten Audrey back. He tells Donald, “his worst enemy brought Audrey back to him, and then his best friend took her from him again.” He gives Billy a sword and tells him to “do the honorable thing,” and then tells him to kill himself.

Elizabeth and the FBI team arrive at the car accident and begin searching the woods for Billy and Donald. Liz finds Donald and Billy, and tells Donald to drop the gun. Donald screams at Billy to pick up the sword. He refuses. Finally Donald shoots his gun multiple times into the snowbank and then hands his gun to Liz. As Liz and Donald are walking away Billy stabs himself with the sword Donald gave him so that he doesn’t have to go to prison. They get back to the car accident and realize that Tanita wasn’t dead, and he had escaped.

Donald heads home and finds a pregnancy test hidden at his house, Audrey was pregnant before she was killed.

Meanwhile Tom is burying Jolene and Reddington’s guy’s bodies. He heads home and gets in the shower to wash the blood off, and Liz climbs in the shower with him.

Donald receives a package from Reddington apologizing for his loss, inside the package is Tanita’s head.

Reddington heads to the ballet.