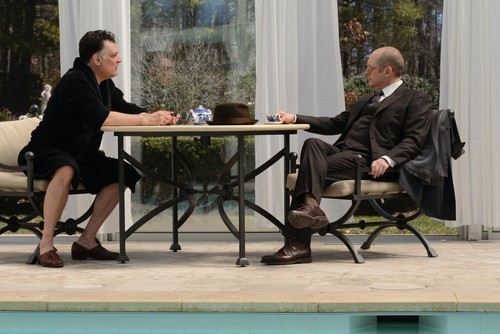 Tonight on NBC their new criminal drama, THE BLACKLIST starring James Spader continues with a new episode called, “The King Maker.”  On it, a politician in Prague is framed for murder, triggering the team’s effort to take down the Kingmaker, a shifty strategist who’s behind the rise of powerful politicians. Meanwhile, Liz unearths a secret that Red has been hiding.

On last week’s episode The Pavlovich brothers specialized in abductions of high value targets and according to Red (James Spader), they planned their next hit. While the team tried to protect the next target, Red had a job of his own for the Pavlovich Brothers. Elsewhere, Liz (Megan Boone) patiently tried to uncover the truth about Tom (Ryan Eggold). Diego Klattenhoff, Harry Lennix, and Parminder Nagra also starred.  Did you watch last week’s episode?  If you missed it we have a full and detailed recap, right here for you.

On tonight’s episode after a Politician in Prague is framed for a murder, Red (James Spader) suspects it’s the work of The Kingmaker (guest star Linus Roache) – a strategist behind the rise of some of the world’s most powerful politicians. While Red helps Liz (Megan Boone) and the FBI catch him, Liz uncovers a secret that Red’s been keeping from her. Diego Klattenhoff, Ryan Eggold, Harry Lennix, and Parminder Nagra also star.

Tonight’s episode of The Blacklist begins in Prague, Czech Republic. A Russian politician climbs in the car, and is arguing on the telephone with someone, he tells them “tell Reddington it is taken care of.” His driver offers him a bottle of water and he takes a sip and passes out in the back seat. He wakes up in a strange apartment he doesn’t recognize and finds a dead male prostitute on the floor. The news in Prage begin reporting that Emil Duschik has been arrested for the murder of a male escort.

Meanwhile Reddington meets with a man and says that he believes “Duschik was framed by the king-maker.” Reddington is sure that “someone has dedicated a great amount of time to destroying his business.”

Liz is sitting in her apartment going through the envelope Tom gave her before he left. There are photos of Red visiting her Dad in the hospital before he died. She shows the pictures to Ressler, but says she is going to act on them until she finds out whether the photos are legit.

Liz visits Reddington and he fills her in on the King Maker, a notorious political strategist that assassinates politicians and creates scandals. He wants Liz to take him out because he is becoming a serious thorn in his side and just killed one of the politicians in his pocket. Liz says she will see what she can do but in return Reddington has to keep an eye on Tom for her and track his every move.

The King-Maker has made it to the US. He meets with a man named Patrick on a bridge, and tells him it is his turn to become a part of his grand plan. He tells him to be on the bridge at exactly 4:00 PM or he will not keep him as a client anymore.

Liz has her team trying to track down the King-Maker by going through incoming flights within the last few days. They show her a photo of the King-Maker and reveal his name is Paul Frederick Simpson (most likely an alibi). They also track his credit card to a hotel in New York. Liz and Ressler head to the hotel and realize that the King-Maker stole a salesman identity and is using his name as an alias, the man at the hotel is not the King-Maker.

Reddington has dinner with Fitch, and gives him a heads-up that the King-Maker is in town and is gunning for him and Red. He wants Fitch to work together with him to try to stop the King-Maker.

Red and Liz are sitting in front of the television and watching the news. Assemblyman Patrick Chandler and his daughter survived but his wife died in the crash. Red is convinced that Patrick’s accident was the work of the King-Maker, and his polls are about to skyrocket.

Liz has had the surveillance video from the hospital that her father died in, and Red was definitely there. He left the hospital exactly one hour before her Dad died. She and Ressler head to the bridge that Patrick drove off, and are concerned that there aren’t any tire tracks. Patrick didn’t even hit the brakes before he drove over the bridge.

They decide to track down the man in the van that collided with Patrick. They get an address for the van, however they aren’t going to get to meet the man because the King-Maker just shot him dead in cold blood.

Fitch is meeting with a group of his partners and reveals that Reddington contacted him. The King-Maker is trying to take down Red, and there is a chance that he knows about Fitch and his associates – he may expose their alliance. They decide to vote on whether or not they should help Reddington take down the King-Maker.

The King-Maker meets with Patrick, and Patrick is upset that his wife didn’t survive the crash, none of them were supposed to die. The King-Maker informs him that it wasn’t a bad thing his wife died. Patrick is scared because the FBI paid him a visit, the King-Maker reassures him that everything is fine and insists they carry on with their scheme.

Liz tracks down a payphone that the King-Maker used to call Ruiz, the man he hired to run Patrick off the road. She and Red head down to the street where the King-Maker called them from. Red takes her into a secret lounge hidden behind a guitar store front. She sits down at a table with Red to wait for the owner of the club to arrive, and she questions him about her Dad. She wants to know why Red visited her Dad the day he died. Red says he went to see her Dad Sam before he died to say goodbye. Charles, the owner of the club arrives, and interrupts their conversation. Charles reveals to them where the King-Maker might be staying.

Liz and Ressler head to the hotel room and find a room full of computers containing maps and diagrams of the city. They took photos of the blueprints and security codes that King-Maker has on his computers. They send the photos to their team and they learn that the house belongs to Senator Albert Mitchell. And, if Mitchell dies then Patrick is the frontrunner for his Senate seat.

Meanwhile at the Senator’s house his security alarms go off, his wife tries to call 911 but their phone lines have been disconnected. The Senator heads downstairs and finds the King-Maker in his living-room.

Liz and Ressler arrive at the Senator’s house and find him wounded on the floor. They begin sweeping the house and the King-Maker attacks Liz and begins choking her. Ressler comes to her rescue and shoots him in the back on the head.

Reddington meets with Fitch and he informs him that the alliance has decided not to work with him. Red threatens that he is making a horrible mistake and the evidence he has on them could destroy them.

Red receives a phone call form Liz and he begs her for five minutes with the King-Maker, he needs to know who paid him to take out his politician in Prague. Liz reveals that isn’t possible because the King-Maker is dead.

While Patrick is giving a press conference Liz and Ressler arrest him in front of all of the cameras on conspiracy to commit murder.

Liz receives a phone call and learns that her Dad’s time of death was actually around 4:30, when Red was in the hospital room. Liz confronts Red and asks him if he killed her father, Red confesses that he did kill Sam. Red insists that her Dad was in pain and suffering and not thinking clearly, and he put him out of his misery. Liz tells Red she is done with him and “this ends right now.” She tells Red he is a monster and storms out.

She heads back to her house, which is still destroyed form her fight with Tom. She cries in her living-room and takes off her wedding ring. She heads over to Ressler’s house and he lets her in, she tells him she “didn’t know where else to go.”