BY Amanda Austin on May 5, 2014 | Comments: one comment
Related : Recap, Television, The Blacklist 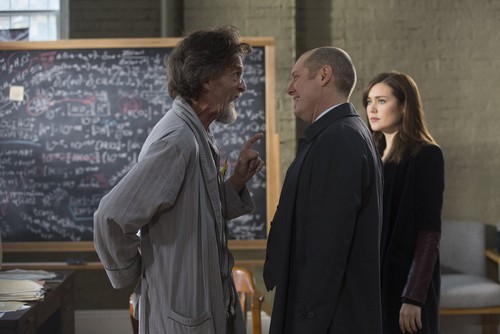 Tonight on NBC their new criminal drama, THE BLACKLIST starring James Spader continues with a new episode called, “Berlin.” On tonight’s episode Part 1 of 2, Liz concludes that she can’t trust anyone and refuses to work with Red after the truth about her father’s death is revealed. Red seeks to make amends and delivers a case the FBI can’t turn down. Elsewhere, Liz divulges information about Tom.

On last week’s episode Red (James Spader) and the team were on the hunt for “The Undertaker” (guest star Damian Young) – a life insurance claim adjuster who convinced ordinary people to become contract killers. Meanwhile, Liz (Megan Boone) worked with Red to uncover Tom’s (Ryan Eggold) secrets. Diego Klattenhoff, Parminder Nagra & Harry Lennix also starred.  Did you watch last week’s episode?  If you missed it we have a full and detailed recap, right here for you.

On tonight’s episode Liz at the end of her rope, realizes she can’t trust anyone – Liz (Megan Boone) refuses to work with Red (James Spader) after discovering the truth about the death of her father. Seeking to make amends and force Liz to see him, Red brings the FBI a case they can’t ignore. Meanwhile, Liz reveals what she knows about Tom’s (Ryan Eggold) secret life to the FBI. Diego Klattenhoff, Harry Lennix, and Parminder Nagra also star.

Tonight’s episode of Blacklist starts off with a security guard named Paul who works in an armored truck coughing in the back of the truck. He keeps coughing up blood and wheezing. The truck stops and he hops out and enters a bank. He heads to the bathroom and calls 911, he records a message for his wife and tells her how much he loves her. He stumbles back out in the lobby and collapses, blood is coming out of his ears now. He dies on the floor and the paramedics arrive. They lock the doors and reveal to all of the patrons in the bank that they are under quarantine and whatever Paul died form could be contagious.

Tonight’s episode of Blacklist starts off with a security guard named Paul who works in an armored truck coughing in the back of the truck. He keeps coughing up blood and wheezing. The truck stops and he hops out and enters a bank. He heads to the bathroom and calls 911, he records a message for his wife and tells her how much he loves her. He stumbles back out in the lobby and collapses, blood is coming out of his ears now. He dies on the floor and the paramedics arrive. They lock the doors and reveal to all of the patrons in the bank that they are under quarantine and whatever Paul died form could be contagious.

Liz reveals to the FBI that her husband Tom was some sort of spy, and was gathering intelligence on her and her work. The FBI cleans everything out of their house for evidence, and Liz sits down and tells the agents everything she knows about Tom and his associates.

Tom catches the tail Reddington placed on him. He takes the man hostage at gunpoint and tells him to call Red and tell him that he lost his trail. Tom reveals to his hostage that he works for a man named Berlin…and he says “Berlin is coming.”

Liz tries to turn her resignation in to Harold. Reddington shames her and says that Berlin is coming and a lot of people are going to die and their death will be on her hands. Liz agrees to do the Berlin case, and then says she is resigning. Reddington briefs Liz and her team on the Cullen virus that killed Paul, he thinks Paul was a foot soldier carrying the disease, and that Berlin is responsible somehow.

Liz and Ressler head to Westland Bank, the investigator there reveals that the Cullen disease is “so deadly it is illegal to study.” She reveals to them that the virus was intentionally mutated so that it didn’t spread, and everyone in the bank is uninfected.

Liz boards a jet with Reddington, they are headed to meet Red’s friend Dr. Bruce Sanders who specializes in black market virus.

Ressler discovers that Paul had the antidote to the virus. They tracked his text messages and someone was blackmailing. They promised to send him more antidote if he completed his mission. Apparently Paul chose to die rather than complete his mission.

Elizabeth and Reddington arrive at the institute and meet with Dr. Sanders. Elizabeth is concerned when she realizes that Sanders is a patient at the mental hospital and not a doctor. Reddington questions him about what he knows about the Cullen virus. Sanders says that the virus is “spooky spooky stuff.” Sanders begins rambling and says that the “Space agent told him Cullen is bringing the death. The virus is the Apocalypse, and the five horsemen are coming.” He hands over a stack of research he has done on the virus to Reddington. Elizabeth storms out because she thinks this entire trip was a joke, and Red just tried to get her alone on the plane so he could get back on her good side.

Harold learns that if Elizabeth walks, Reddington loses all immunity. And, the higher-ups think that it is too shady that she is close with Reddington and her husband is a spy.

Elizabeth is shocked when Ressler informs her that the information Reddington gave them from Bruce is legit. She and Red head back to the hospital to visit Bruce to find out who he created the antidote for. He begins rambling about a man named “Space Agent UD-4126.” She realizes UD is what is on the badges of disease and control agents, they look up agent 4126 in their database and find it belongs to a disease and control officer named Nikolaus.

Ressler, Elizabeth, and the team barge into Nikolaus’s most recent address. They find a lab in his basement full of test tubes of Cullen virus and take him into custody. Ressler tries to question Nikolaus, all they can get out of the doctor is that “he is coming.” Elizabeth sits down with Nikolaus, and he says he has “infected different people from all walks of life.” And, they are all waiting on him to send them the vaccines. He refuses to tell her the five names of the people he infected. Elizabeth has one up on Nikolaus though. She gave him the virus via his cu of water, and she isn’t giving him the virus until he tells her the names of the five people he has infected.

Elizabeth heads home and begins deciphering all of Tom’s files and the book he used to correspond with Berlin. After hours of going through papers, Elizabeth has an epiphany. She rushes back to the office and announces “it is all related to the Blacklist.” Reddington is using them and the FBI to survive the war against his faceless enemy. He doesn’t know who he is but Berlin is after him, and he is coming for Red…today.

Lizzie rushes to meet Reddington and orders him to get in the car now. He begins questioning her and refuses to budge.

Meanwhile a group of men with guns are taking over the airport. Meanwhile an airplane is attempting to land on the runway. Ressler and the teams of FBI agents arrive at the airport and the men escape in an armored truck.

Lizzie reveals to Reddington that he no longer has immunity and the FBI is on their way to bring him in. Reddington doesn’t seem concerned, he sits down on a bench in the park and won’t leave with Elizabeth until she explains to him why she had a change of heart.

The plane didn’t land because the FBI was at the runaway. There is a man with a hood on in the back of the place. He orders the pilot to “give him the key.”

The FBI surrounds Reddington and Elizabeth, but they continue talking. Elizabeth informs him that she will not forgive him for killing her Dad, but she needs his help and she needs answers, so they are “stuck with each other.” Reddington tells her a story about when he was stuck on an Island and he thought he was dying from a poisonous fish bite, but a woman saved him and nursed him back to health. Then the woman kissed him on the cheek and it made “nearly dying well worth it, that’s how he feels right now.”

Reddington drops down on his knees and surrenders himself to her and all of the FBI agents. While he is on his knees the plane flies overhead, smoking because it is down and a wing and barely staying in the air. He tells Elizabeth “and now it begins.”