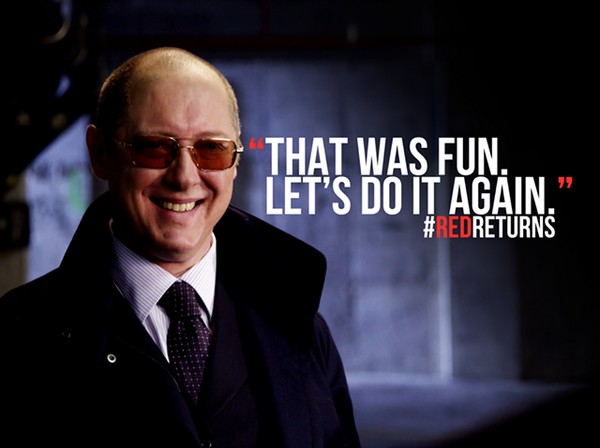 Tonight on NBC the criminal drama, THE BLACKLIST starring James Spader returns with an all new Monday September 22, season 2 premiere episode called, “Lord Baltimore.” On tonight’s episode while continuing to battle Berlin, Red faces a new threat in the form of Lord Baltimore.

On the last Season’s finale episode with the crashing of the mysterious prisoner transport plane, the city was on lock down as the authorities were on the hunt for all the escapees. Meanwhile, with Red (James Spader) in custody, Liz (Megan Boone) used her power to get him out since he was their best chance at finding all the suspects. Elsewhere, their main objective was to track down Berlin, a prisoner on the plane who was somehow involved. Diego Klattenhoff, Ryan Eggold, Harry Lennix and Parminder Nagra also star. Did you watch the last season’s finale episode? If you missed it we have a full and detailed recap right here for your enjoyment.

Tonight’s episode of The Blacklist is going to be great and you won’t want to miss it. So pop some popcorn, grab a snuggle buddy, and definitely tune into this hot new series! While you wait for our recap, hit the comments and let us know if you are excited about the new season.

Tonight’s episode of The BlackList kicks off with Red in a jungle being chased by men with guns. He pays his dictator Ubari a visit, and says that he has come to strike a deal. He dumps a trunk of cash on the table in front of Ubari and says that he knows Berlin hired more bounty hunters and he wants their names, he will pay $3 Million for them. After threatening to “rain fire” on him, a missile drops right next to them. Ubari reveals that Berlin has hired hit man “Lord Baltimore” to take out Red. Red lights all the cash he just paid him on fire and walks away.

The deputy attorney general arrives at the office and demands to speak to Reddington, she wants to know why they game him millions of dollars to use and he burnt them. Ressler informs her that the only person that Reddington speaks to is Elizabeth. Meanwhile, Elizabeth is meeting with Red, he tells her he has a lead and “Lord Baltimore” is a statistician and analyzing people’s web history to track them down.

Elizabeth heads to the office and shares her information with the team. They check out all the major internet data companies, and find a suspicious woman named Rowan Mills. She recently has been receiving payments of $250,000 in her IRA account. Ressler and Elizabeth pay Rowan a visit and she insists that she is the victim, and she has no idea where the money came from. On the way back to the office Elizabeth confesses that she is paranoid and she knows someone is following her.

Rowan heads home that night and receives a phone call from a computer voice, it says “Hello Rowan, I know you had a little chat with the FBI. Let me make it easy for you, don’t talk to them again.” Elizabeth and Ressler head over to Rowan’s house to trace the phone call. They get a location and rush the house with a SWAT team. They find pictures of her all over the mirror, and Rowan’s name is on the lease. Rowan cries that she has no idea what is going on and insists she has never been to the house in her life.

Reddington pays Harold a visit, and asks him when he is going back to work. He says he isn’t, he wants to be with his family. Red says that he needs to come back, his replacement isn’t working out well. He tells Harold he needs to get back on his feet, and says there is no shame in being a cripple. Harold stands up to leave, and Red tells him that he knows what they found when he was in the hospital and he knows about his diagnosis, he should “get the job done.”

Rowan reveals to Elizabeth and Ressler that she has a twin sister named Nora that died seven years ago. But, the only possible explanation is that her twin sister is still alive and those pictures are of her.

Red arrives at his hotel, while he is walking up stairs a helicopter hovers outside the building. Men jump in through the windows and flash grenades are thrown. Everyone begins running and panicking, and the man knock out Red’s body guard and grab Red and throw him in the helicopter.

Red is being tied to a chair and held hostage by a woman, she has no idea who Lord Baltimore is. She has captured Reddington because of his “little dust up in Mussab,” apparently two Turkish agents were killed. Red laughs at her and tells her that the people she just alerted of his capture are going to have her set him free.

Elizabeth meets with Rowan’s mom who confirms she had a twin sister named Nora. Apparently, Nora was troubled, and molested as a child and no one believed her. She got a job at a security firm, and pressured Rowan to help her get information on people, but Rowan refused. Three weeks later she left the country on a job and was killed in an explosion, her body was never recovered. Elizabeth releases Rowan, who begs to stay in custody because she is afraid that her sister is coming for her.

Elizabeth’s team has been working hard trying to hack in to Lord Baltimore’s algorithm, they finally catch a break and manage to get a list of possible targets. As predicted the FBI arrives and forces the Mussad to hand over Reddington. Elizabeth sends Red the list of Lord Baltimore’s targets, and one of the names on the list is Naomi Highland. Red tells Elizabeth she needs to get a unit to Naomi’s house ASAP, and reveals that she is his ex-wife.

Naomi has a livingroom full of suburban soccer moms and their husbands playing cherades. US Marshall’s rush in and say that they are here on official business and she is in serious danger. Naomi cries to Elizabeth that she is not running and hiding, and she is not letting Reddington turn her life upside down again.

Ressler finds a key in Nora’s apartment and realizes it goes to a van that was parked outside Rowan’s mom’s house. He opens the van door and finds a cooler, with Nora’s decaying body on ice. Meanwhile, Rowan is outside Naomi’s house with her men. They rush inside with guns and take down all of the agents with Elizabeth, she manages to shoot one of them after she is shot with a stun gun. Rowan’s men grab Naomi and put a black bag over her head and drag her out of the house. Elizabeth runs outside and tackles Rowan and handcuffs her, but her men got away with Naomi. She radios in that Lord Baltimore is in custody. Meanwhile, Rowan’s men deliver Naomi to Berlin, he rubs her face with his hook and sneers “hello Mrs. Reddington.”

Elizabeth takes Rowan in to custody and demands to know where Naomi Highland is taken. They realize that Rowan has disassociate disorder and multiple personalities, she passed a lie detector test because she has no idea that she really is Nora. They torture Rowan/Nora’s henchman Marcus until he confesses that there is a trigger to bring out Nora, it’s the song that was playing when Nora killed Rowan. Elizabeth plays the song for Nora, and she comes out. Elizabeth informs her that Marcus cut a deal, and she gives up the address where they took Naomi.

Elizabeth and her men rush to where they took Naomi, but she is gone and all of the men are dead except one, who is seriously injured. She calls Reddington and he demands to talk to the one guy that hasn’t died yet. He reveals to Red that Naomi was taken to the Bluejay Motel by the man with one hand. Reddington heads to the Bluejay and Naomi is already gone, he finds a pocket watch laying on the bed with Naomi’s picture in it.

The next day Elizabeth receives paperwork from her lawyer revealing that her marriage to Tom has been officially annulled. She heads back to work and learns that interim director Martin in gone, and Harold is back to work. Everyone gives him a standing ovation as he walks through the office.

Red receives a package at his room, the concierge says it was left at the front desk for him, it’s a burner phone. He picks it up and Berlin is on the other line, he demands to know where Naomi is, Berlin says he is going to send her back to her “piece by piece” like Reddington did to his daughter.