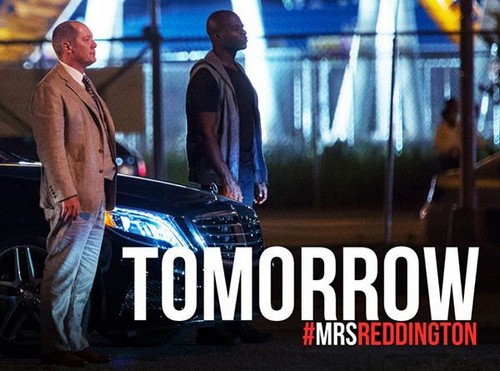 Tonight on NBC the criminal drama, THE BLACKLIST starring James Spader returns with an all new Monday September 29, season 2 episode 2 called, “Monarch Douglas Bank.” On tonight’s episode Red aims to take down a corrupt bank after it’s robbed, but Liz questions his intentions. Meanwhile, a new member joins Cooper’s task force after impressing the team members. And who is excited about Paul Reubens (PeeWee Herman) starring this season on The Blacklist!

On the last episode Mary Louise Parker (“Weeds”), Krysten Ritter (Don’t Trust the B—- in Apartment 23) and Peter Stormare (“Fargo”) guest starred–Red continued to battle Berlin (guest star Peter Stormare) and faced a new threat from a man named Lord Baltimore. An important person came back from the past into Red’s world. Meanwhile, Liz (Megan Boone) tried to move forward with her life after her showdown with Tom (Ryan Eggold). Diego Klatenhoff, Harry Lennix, Amir Arison and Mozhan Marno also starred. Did you watch the last episode? If you missed it, we have a full and detailed recap right here for you.

On tonight’s episode when the Monarch Douglas Bank is robbed, Red (James Spader) seizes the opportunity to try and take the money -laundering bank down. Liz (Megan Boone) questions Red’s intentions as she investigates the crime. Meanwhile, a new member (Mozhan Marno) joins Cooper’s (Harry Lennix) taskforce after impressing everyone on the team. Diego Klatenhoff and Amir Arison also star.

Tonight’s episode of The Blacklist begins with a bank robbery, men arrive in hazmat suits with machine guns and order everyone on the floor.  The power goes off and they begin ransacking the safe deposit boxes and the tellers cash drawers.  Red receives a phone call alerting him that the bank in Warsaw has been hit, he asks how much they got away with, and the caller says they both know what the robbers were really after.  Red’s specialist kate arrives to clean up Red’s latest piles of bodies, she tells him to reassess his mission to find his wife, because ethe bodies are getting out of hand.

Later Lizzie pays Red a visit and he is getting a manicure from his nail surgeon Rosa.  He dismisses her, and Elizabeth says that she researched his wife Jennifer and she was placed in protective custody seven years ago  his daughter was as well, but there is no trace of her.  Red informs Lizzie that Monarch Warsaw bank was robbed, and it is the bank of criminals, they’re legendary for laundering the money of the criminal elite.  Lizzie rushes back to the office and tells Ressler and Harold that if they find the men that robbed the bank, they will find a ledger of every major criminal organization’s finances.  Harold tells them to get on the next plane to Warsaw.  Meanwhile, Red receives a package with one of Jennifer’s teeth in it.

Ressler and Elizabeth arrive in Warsaw at the bank, the bank manager reveals that the robbers got away with over $400,000 in bearer bonds.  Lizzie tells the managers that they need copies of all of their records, and he agrees to comply.  Afterwards he tells one of his men that The Formula is missing, and if they don’t find it, then they are all dead.  Lizzie and Ressler learn that the hackers deleted the security tapes before they left the bank.  They have Rob pull images off the security tape across the street.  On the footage they can’t see what happened inside the bank, but they realize that five people in hazmat suits went inside and six came out.  The sixth person in the suit’s face was covered, but they can tell it is a woman and she looks scared.  Lizzie announces that this wasn’t a bank robbery, it was a kidnapping.

Lizzie and Ressler determine that the kidnapped woman is an employee named Padra.  The bank manager reveals that she was sick that day and must have lest early.  Lizzie demands they send over Padra’s employee file.  They check out her apartment and the landlord reveals that Padra is always with men, they walk her to work and walk her home, like guards.

The Warsaw bank robbery apparently has inconvenienced Berlin, who is waiting for a wire transfer.  He calls the bank manager Strictland and demands to know what the hell is going on, and warns him that if his funds don’t come through he is dead.

Red arrives in Warsaw, and speeds up the bank robbery investigation by visiting an old woman in a bakery who sold the robbers their guns, she gives him an address.  Ressler and Lizzie barge in to a hotel room where men are sitting on laptops and Padra is there.  While the men are taken in to custody Lizzie informs Padra that she is safe now, but Padra informs her she was already safe, she left with the men in hazmat suits willingly because she was escaping.  Lizzie and Ressler rush Padra to a safe-house and Lizzie calls Rob and asks for info on her associates.  Padra argues that if the police know where she is, then Strictland will know where she is too.

Meanwhile, Strictland arrives in New York and meets with Berlin, he reassures him that his money safe.  At the safe house in Warsaw Padra reveals to Ressler and Lizzie that she is Strictland’s prison because she is The Formula. She has a photographic memory, that is how the bank launders money without a paper trail, they have all of their accounts stored in her head.  And, that is why Strictland can’t transfer Berlin’s money, only The Formula can.

At the safehouse a Warsaw police officer arrives and demands that they hand Padra over, when Elizabeth won’t he attacks her and after a wrestling match the gun goes off and shoots Padra in the side.  Elizabeth and Ressler manage to barely get Padra out of the house as more men are arriving to take her back to Strictland,  but she is seriously injured, in the cab Ressler shoves a tampon in to her stomach wound to try and slow the bleeding.

Ressler and Elizabeth’s cab with bleeding Padra in the back seat is stuck in a traffic jam.  The police are searching all of the cars, they bail from the cab and steal another car.  They call Harold for help and he tells them to ditch the car and their phones and get off the grid and stay low, the city is crawling with dirty cops looking for them.  Elizabeth calls Red from a payphone and he tells her he has arranged a train to meet them under the bridge and deliver them to safety.  They climb in to the train and the engineer starts driving them out of Warsaw, Ressler tries to patch Padra up in the bank.  While he is working on her, the train comes to a screeching hault, men with machine guns arrive followed by Red.  His men carry Padra out and he reassures them that he is taking her to a safe place for medical care.  Donald protests but Red orders his men to see that Donald and Elizabeth are on the next flight out of Warsaw.

Red calls Berlin and tells him it is time for them to meet face to face, Berlin agrees to meet him at Coney Island.  Red waits on a bench, and Berlin arrives and sits down next to him.  Red wants to know if this has all been worth it, Berlin says he did it all for revenge.  Red warns him that he should make sure his passion isn’t his sickness.  Berlin ignores him and says that his “wife is coming apart nicely.”  Red tells him that they have a common enemy, the man that lied to him and told him he killed his daughter, and he has all of Berlin’s money.

Ressler and Elizabeth head back to the office and Harold is fuming that they lost Berlin, Padra, and have no idea where Reddington is.  He wants them to get a handle on this situation ASAP.  Elizabeth says that Red’s manicurist is a surgeon, she may be working on Padra.  Harold tells them to Rosa ASAP.
Red says he will give Berlin his money back, if he hands over his wife.  Berlin admits that it took him years to find Red, but he found Elizabeth Keen and knew that she would lead him to Red.  Berlin gets up to leave and tells Red to have his men set up the meeting.

After their meeting Red plays some carnival games and Elizabeth calls him and tells him that she found Padra and froze the account with Berlin’s money in it, she wasn’t going to hand millions of dollars over to a psychopath to fund terrorism for the life of one woman.  Red warns her that one day she will regret this, even though she’s just doing her job.  She tells him to stop the deal because if Berlin realizes the account is frozen, he will kill Red.  He tells Lizzie he can’t do that and hangs up.

After dark Red meets Berlin in the parking lot of the amusement park.  He gives Berlin codes and he types them in to his tablet and the account says that the money is available.  He hands Red’s wife over to him and they go their separate ways.

Elizabeth stops by Ressler’s office and apologizes to him for snapping at him when they were in the cab in Warsaw, he forgives her and she leaves.  Liz heads to Red’s house and he thanks her for transferring the money.  She tells him that as far as she is concerned every life that Berlin takes from now on is his fault, and she hopes his wife’s life is worth it.  Red doesn’t want to hear it, he knows that she has a secret source that she isn’t sharing with him, because he never told her that Berlin kept his money there.  Lizzie leaves, and Red’s phone rings, Samar reveals to him that she “is in” and Harold trusts her and brought her on board.