The Bold and the Beautiful Recap 2/18/14: Do Brooke and Ridge Truly Belong Together? 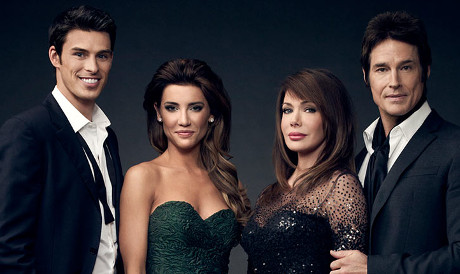 The Bold and the Beautiful isn’t our favorite soap on the air, but it’s definitely one that keeps us intrigued — now more than ever. On the most recent episode, which aired on Tuesday (February 18th), Quinn skewered bill with questions, Katie put the heat on Ridge, and Brooke pressured Katie into accepting the role of Matron of Honor for her wedding; however, Katie wasn’t keen on accepting Brooke’s invitation, despite being told that she’s needed at this wedding. After all, as Brooke states in the episode, Katie’s a symbol of goodness and purity and it would be a tragedy if she didn’t attend — even after all that’s happened.

Wow. As always, this was one intense episode, filled with enough drama to have us feeling heavy for days! Continue reading for this episode’s highlights/main points, as well as a couple of spoilers for tomorrow’s episode (2/19/14). On today’s episode . . . .

Katie asked Brooke if she ended up talking to Ridge, her fiance, how he felt about her becoming Matron of Honor. B confessed that she hadn’t yet talked to him about the situation but just knew that he’d be thrilled with the idea. This put some hesitation in Katie, causing her to, at first, reject her sister’s invitation. Though, after some banter, Katie eventually caved in.

Wyatt, Hope, and Pam worked with Ridge. Later, Pam talked with Wyatt and Hope about the jewelry heist and confessed that she doesn’t think Liam could’ve ever played a hand in something of this nature.

Brief summary of this episode: Quinn wants Wyatt to keep up with their plans to come between Hope and Liam. Meanwhile, Liam confides in Ally about his issues regarding Hope and Wyatt.

Quinn stumbled upon Bill (shirtless) at his beach house. Bill was brooding and moody. Quinn wanted to know the source of his pain and, eventually, found out that he’s in love with Brooke — soon to be married. Quinn told him that he’d find another woman, one who’s right for him. But he only wants Brooke.

Ridge visited Katie at her office. He said that he’s glad she’ll be attending the wedding. Katie said she’ll be there for his new beginning.

SPOILERS FOR NEXT EPISODE:

• Katie will dread the upcoming wedding, especially now that she has a primary role in the event. How will she react when it’s finally time for B & R to marry?

• Rick and Ridge will have a heart-to-heart discussion that just might smooth things over between them.