The Bold and the Beautiful Spoilers: Bill Pleads With Brooke To Stay and Marry – Hope Warns Quinn Over Wyatt’s Baby 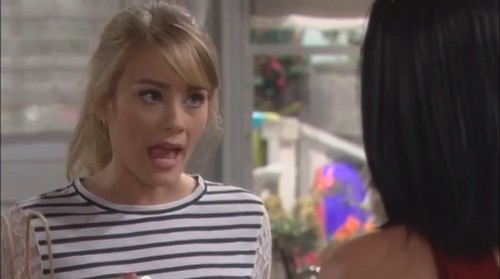 The Bold and the Beautiful spoilers for October 3 reveal Bill Spencer just can’t take “no” for an answer. He may easily be the most persistent man in daytime television. Despite Brooke Logan turning down more hand proposals than we can count on fingers in the past six months, he refuses to accept the fact that Brooke is not going to marry him. On October 2nd, Brooke announced that she was going away to Italy for a few months and encouraged Bill to consider getting back together with his baby-mama (and Brooke’s sister), Katie. Bill’s response? “Oh no biggie, we can just get married in Italy.”

According to Bold and the Beautiful spoilers for Friday October 3, Bill Spencer makes one last ditch attempt to convince Brooke Logan to marry him. In the promo video Brooke argues, “I see things differently now, the way I should have seen them a long time ago. I have one shot in this life, and this time I have to get it right.” Bill tries to reason with Brooke and insists that she doesn’t have to give up her happiness in exchange for Katie’s. B&B spoilers already revealed that Brooke does indeed jet off to Europe, so it is safe to assume that Bill’s desperate attempt to get Brooke to marry him on October 3 is an epic failure.

The Bold and the Beautiful spoiler video also shows Hope laying down the law to Quinn, and informing her that she is not allowed anywhere near her and Wyatt’s unborn baby. Hope informs Quinn, “You cannot be in my child’s life and that is just the way it has to be.” Also, guest star Fred Willard will appear as Ivy’s father, John, again on October 3rd, and he can be seen talking business with a few members of Forrester Creations.

So, B&B fans, do you think that once Brooke is gone, Katie and Bill will wind up getting back together? How do you think Brooke will react when she returns and finds out they took her advice and really did reconcile? Do you think Quinn will follow Hope’s instructions and stay away from her and the baby? Let us know what you think in the comments below!