The Bold and the Beautiful Spoilers: Eric Off To Europe, Signs Company Over To Rick Not Ridge – John McCook Exits 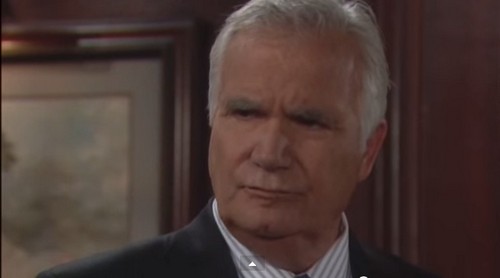 The Bold and the Beautiful spoilers tease that yet another character is packing up their bags and headed to Europe for a brief visit. According to Bold and the Beautiful coming and goings news, John McCook will be exiting for a short stint as his character Eric Forrester heads to Milan to work with Brooke Logan (Katherine Kelly Lang). Eric will be the fourth character to travel to Milan in the last few months, he’ll be joining Brooke, Hope Logan, and Wyatt Fuller (Darin Brooks).

According to Bold and the Beautiful spoilers, Eric Forrester will make a shocking decision before he leaves for Europe – and he will set Forrester Creations in to a tailspin by doing so. Eric’s scheming son Rick Forrester has been pressuring his father to sign full control of the company over to him for several weeks now, despite desperate pleas from Carter and Ridge (Thorsten Kaye) to reconsider, Bold and the Beautiful spoilers tease that Eric finally signs the papers and chooses to back his on Rick over his other son Ridge. Obviously Eric’s decision leaves several employees at Forrester Creations disgruntled, however Rick and Maya are thrilled.

So B&B fans, why do you think that Eric Forrester is heading to Milan? Will he and Brooke end up hooking up again while they are in Europe? Once Rick (Jacob Young) has full control of Forrester Creations, what kind of damage do you think he will do to the family company? Did Eric Make a mistake by signing the papers over to Rick? Let us know what you think in the comments below and don’t forget to check CDL tomorrow for more Bold and the Beautiful spoilers and news.