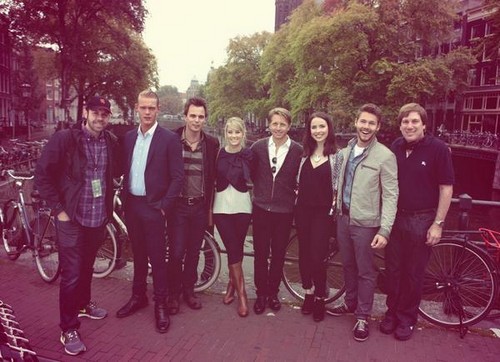 The Bold and the Beautiful spoilers have been teasing a possible affair between Ridge and Caroline for a few weeks now. Maya, who is desperate to break up Rick and Caroline, has been trying to plant seeds of doubt in Katie and Rick’s minds about their significant others spending so much time together. Anyone with two eyes can see an undeniable chemistry when Ridge and Caroline are in the workroom together.

According to Bold and the Beautiful spoilers for the week of October 6-10, Maya is finally starting to get to Rick and he is beginning to question how much time his wife has been spending with Ridge, so much so that he takes his concerns to Eric.  Meanwhile, B&B spoilers also tease that Carter threatens Maya to stop meddling in Rick and Caroline’s marriage and threatens to expose her schemes.

B&B spoilers reveal that the week of October 6 is Brooke Logan’s big exit as she heads to Milan to do some soul searching and leaves the canvas for a few months, leaving behind a heart-broken Bill Spencer and Deacon Sharpe, who both asked Brooke to marry them.  Bold and the Beautiful spoilers reveal that Deacon will have no trouble moving on after Brooke’s exit, and after a hot and steamy kiss with Quinn – he makes it his mission to seduce her.  Bill Spencer on the other hand, doesn’t bounce back as quickly as Deacon, but spoilers tease that his right-hand-man Justin helps him try to get over Brooke and move on.

Fans can also expect to see Fred Willard’s exit during the week of October 6, but before John leaves, Ivy’s dad awkwardly demands to know what Liam’s intentions are with his daughter. Obviously Liam has no idea what to say, because he didn’t know he was supposedly dating Ivy. And, Quinn and Hope go to war over the Wyatt’s unborn baby, Quinn refuses to accept the idea that she will not be a part of her grandchild’s life.

So B&B fans, do you think that Ridge and Caroline will actually cheat on Rick and Katie?  How do you feel about Quinn and Deacon hooking up?  Do you think there is a future for Ivy and Liam?  Let us know what you think in the comments below and don’t forget to check CDL tomorrow for more Bold and the Beautiful spoilers.