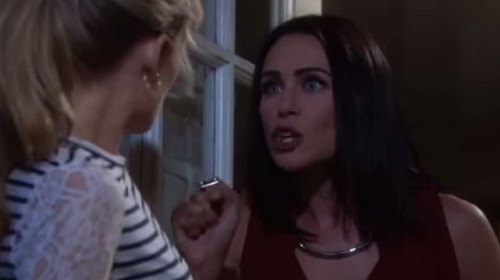 The Bold and the Beautiful spoilers tease that fans will not want to miss the week of October 6-10. Tensions run high on the CBS soap opera as two leading men go to war, Quinn continues to meddle in Wyatt’s life, and sparks fly between two characters who get too close.

Monday October 6: Bold and the Beautiful spoilers reveal that on Monday October 6 Quinn is furious that Wyatt’s wife Hope has ousted her form the family and will not let her be a part of her unborn grandchild’s life. Will Hope be in danger? Deacon’s concerned. Meanwhile, guest star Fred Willard grills Liam about his relationship, or lack of, with his on-screen daughter Ivy Forrester.

Tuesday October 7: B&B spoilers have been hinting at a scandalous affair between Caroline and Ridge, and on Tuesday’s episode Caroline’s hubby Rick catches them getting a little too close. Meanwhile, Maya finds a new partner-in-crime to help her destroy Rick and Caroline’s marriage.

Wednesday October 8: Tensions run high on Wednesday’s episode of Bold and the Beautiful when Rick confronts Ridge about his relationship with Caroline. While everyone at Forrester Creations is buzzing about Ridge and Caroline, Katie begins to question her future and her engagement.

Thursday October 9: Bill Spencer is heartbroken by Brooke’s exit, but his right-hand man Justin has some unusual advice for how to overcome his relationship woes. According to Bold and the Beautiful spoilers, on Thursday’s episode of the CBS soap opera, Rick pays Eric Forrester a visit and exposes Ridge secret, telling him that Ridge can no longer draw.

Friday October 10: Bold and the Beautiful spoilers tease that on Friday, Eric Forrester makes a shocking announcement about the future of Forrester Creations. And, Bill Spencer and Katie have a serious chat about their future, possibly together.

So B&B fans, what do you think Eric’s big announcement is, will he fire Ridge? Is Caroline’s marriage to Rick in trouble? And, do you think Bill and Katie will get back together? Let us know what you think in the comments below and don’t forget to check CDL tomorrow for more Bold and the Beautiful spoilers.