The Bold and the Beautiful Spoilers: Hope Logan Miscarriage – Will Quinn’s Stalking Cause Hope to Lose Her Baby? 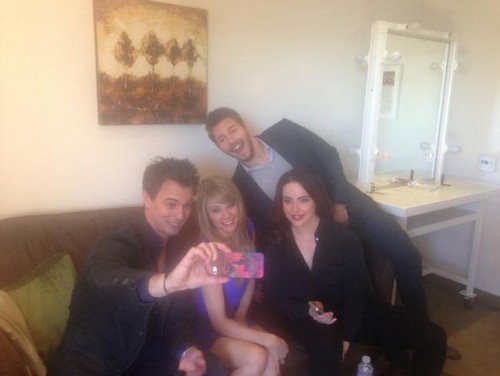 The Bold and the Beautiful spoilers tease that the feud between Hope and her monster mother-in-law, Quinn Fuller, is far from over. After Hope hastily married Wyatt and news broke she was pregnant with his child, she quickly learned just how crazy her hubby’s mother Quinn (Rena Sofer) could really be when she promptly informed her she would not be a part of her grandchild’s life. We can’t exactly say that we blame Hope; after all, Quinn’s track record is colorful to say the least. Would you want your child around a woman who held a sword to a Liam’s neck, dangled Aly over a bridge, and pushed Ivy (Ashleigh Brewer) into the river?

Now that we know that Kim Matula has quit B&B we need to be on the lookout for her final storyline and how Hope Logan will exit the show. Producers at B&B announced yesterday that they have no intention to recast the role of Hope but of course that could change. Could Quinn be involved with Hope’s exit from The Bold and the Beautiful?

According to Bold and the Beautiful spoilers, on the Wednesday November 5th episode of the CBS soap, Quinn crossed yet another line and crashed Hope’s (Kim Matula) first ultrasound. Despite the fact that Hope announced she was getting a restraining order against her baby-daddy’s crazy mom, rumor has it that Quinn is not in any hurry to stop her meddling. And, B&B spoilers reveal that Quinn continues her schemes and creates a ton of drama during Hope and Wyatt’s (Darin Brooks) trip to Amsterdam later this week.

One of the leading complications in early pregnancy is stress – and Quinn is causing a great deal of it for Hope. We can’t help but wonder how far Quinn can push Hope before it begins to affect her and her unborn baby’s health, and possibly even cause a miscarriage.

What do you think, B&B fans, will Hope have a healthy pregnancy with Quinn stressing her out every day or do you see a health scare or possible miscarriage in the future? Let us know what you think in the comments below and don’t forget to check CDL tomorrow for more Bold and the Beautiful news and spoilers.