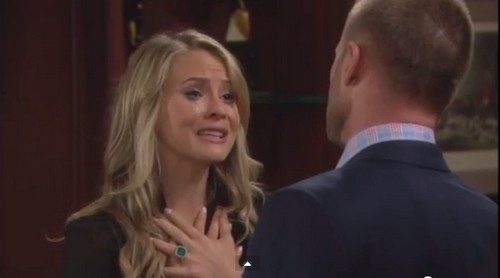 The Bold and the Beautiful spoilers for episodes during the week of October 27 reveal fans will definitely want to tune in to the dramatic CBS soap. The fall out from the news of Eric Forrester’s decision to appoint Ridge as the next CEO of Forrester Creations is huge, and Caroline and Ridge’s affair rocks the family business.

Monday October 27: The Bold and the Beautiful spoilers reveal that on the episode airing October 27 Forrester Creations is in disarray after Maya’s shocking announcement that the rumors of Ridge and Caroline cheating are not rumors at all! Rick takes his frustration out on his father Eric, who just gave away the CEO position to a man trying to steal his wife. An angry Eric confronts Ridge about the accusations, while Caroline desperately tries to fix her marriage.

Tuesday October 28: Maya is a woman on a mission, she may have caused a rift between Rick and Caroline, but now she has to complete phase two of her master plan, winning over heart-broken Rick. Meanwhile, across town Caroline and Ridge are alone for the first time since their affair went public.

Wednesday October 29: B&B spoilers reveal that on October 29 Ridge comes clean to his fiancée Katie and confesses that there may have been a little more to his and Caroline’s work relationship than what he originally told her. Maya continues to scheme to steal Rick out from underneath Caroline, which shouldn’t be difficult considering the circumstances.

Thursday October 30: Bold and the Beautiful comings and goings reveal that Donny Thompson and the rest of the Big Brother 16 cast make their highly anticipated appearance at the Bikini Bar Halloween party. Not everyone at Forrester Creations will be celebrating the holiday though, Caroline is devastated when she realizes the damage her affair did to her marriage may be unfixable.

Friday October 31: Love is in the air at the Bikini Bar Halloween party, after Donny Thompson invites Liam to come celebrate. The sparks between Liam and Ivy are undeniable. Meanwhile, at Forrester Creations Eric tries to have a conversation with Rick.

So B&B fans, do you think that Rick will patch things up with Caroline after she kissed his brother, or will he wind up seeking comfort from Maya? Do you thin Ivy and Liam’s new relationship will last, or is it only a matter of time before love-sick Liam goes chasing after Hope again? Is this the end of Katie and Ridge’s engagement? Let us know what you think in the comments below and don’t forget to check CDL tomorrow for more Bold and the Beautiful spoilers and news.