The Bold and the Beautiful Spoilers: Deacon Tries To Reign In Quinn, Wyatt’s Crazy Mother – Liam and Ivy Start Over 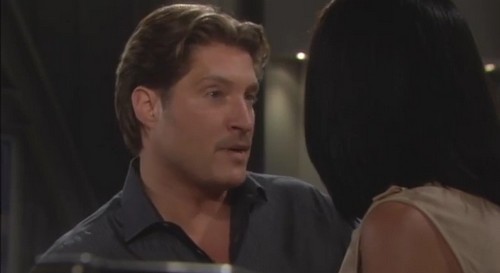 The Bold and the Beautiful spoilers reveal that on Thursday October 16 Deacon will try and talk some sense in to crazy Quinn. Despite Quinn’s multiple attempts to make amends with her son Wyatt and his pregnant wife Hope, they have been adamant that they do not want her in their life, or their unborn child’s life.

In an all new Bold and the Beautiful spoiler video for the October 16 episode, Deacon tries to reason with Quinn about their future grandchild. He informs Hope’s crazy mother-in-law, “You got to trust me on this, I know my daughter. You got to let up.” (It is really ironic that Deacon knows his daughter so well now seeing as how he has been MIA most of her life, but whatever.)
Quinn won’t hear anything Deacon has to say though, regardless of how well he knows Hope.

In the B&B promo video Quinn crazily declares, “I’m going to be there Deacon, for every single day of that child’s life.” Bold and the Beautiful fans know that Quinn is capable of some pretty crazy things, and it looks like Hope is pushing her to her breaking point. According to Bold and the Beautiful spoilers, fans can also expect to see another Hope and Quinn showdown on Thursday October 16th. And, Liam and Ivy decide to start over fresh together, and put their past drama with Hope and Quinn behind them.

So B&B fans, do you think that Quinn deserves another chance, or are Hope and Wyatt right to cut her out of their lives? How do you think she will react when Hope doesn’t back down? Will Deacon be able to help reign in crazy Quinn? Let us know what you think in the comments below and don’t forget to check CDL tomorrow for more Bold and the Beautiful spoilers.