The Bold and the Beautiful Spoilers: Power Struggle at Forrester Creations as Eric Resigns – Caroline’s ‘Feelings’ for Ridge 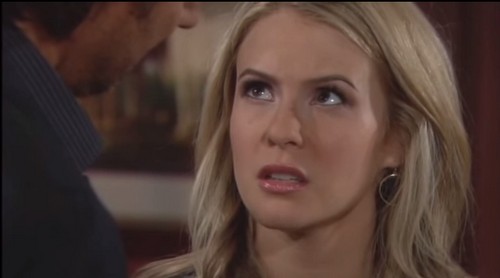 The Bold and the Beautiful spoilers for Thursday October 9 reveal that B&B fans will not want to miss the all new episode of the CBS drama. Spoilers have been hinting at a possible affair between Caroline and Ridge Forrester for weeks now, and it looks like it is finally coming to fruition. On October 8th Caroline caught herself having steamy dreams about Ridge kissing her, while she laid in bed with her husband Rick.

According to an all new Bold and the Beautiful spoilers video for October 9, Caroline decides to come clean to Ridge and confesses to him that she has feelings for him. Meanwhile, Caroline is not the only B&B character coming clean about her feelings. Ridge’s fiancée Katie confides in her ex Bill Spencer that she is growing jealous of Caroline and Ridge’s relationship.

Caroline and Ridge’s possible affair is just the tip of the iceberg when it comes to drama at Forrester Creations. In the new Bold and the Beautiful promo video, Eric Forrester announces to his shocked sons Ridge and Rick, that he is stepping down as CEO and will no longer be running the company. Rick vows to his father Eric that he and his wife Caroline will take over, since they are “the future” of Forrester Creations. However, at the end of the day it is truly up to Eric, and technically he was just filling the CEO position while Ridge was in Paris.

So, will Eric Forrester reappoint Ridge as CEO again despite the fact that he lied about losing his ability to draw? Or, will he decide to appoint Rick as the new CEO? Do you think that Ridge and Caroline will be able to control their feelings, or will they wind up acting on them and cheating on Katie and Rick? Let us know what you think in the comments below and don’t forget to check CDL tomorrow for more Bold and the Beautiful spoilers.