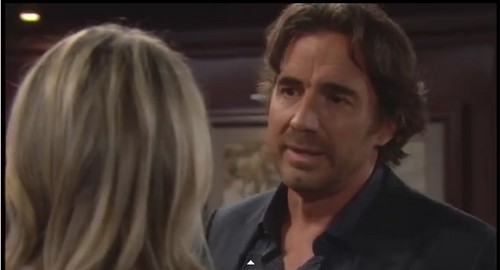 The Bold and the Beautiful spoilers for October 10 reveal there will be a change in regime at Forrester Creations. On the October 9 episode of B&B Eric Forrester announced that he is stepping down as CEO of his family’s company and one of his sons will take over, either Ridge or Rick. Eric’s run as CEO this time around was just supposed to be temporary, while Ridge was in Paris. However, Rick thinks it is a mistake to hand the company back over to Ridge, and thinks he should be the new CEO.

Eric Forrester has a tough decision ahead of him. In the Bold and the Beautiful spoiler video for Friday October 10, Rick is campaigning hard for the CEO position. He informs Eric that he “is older and wiser since the last time this came up.” Obviously Rick is planning to argue that Ridge is no longer an asset to the company since he can’t draw designs, and on top of that he was dishonest and taking credit for Caroline’s.

Rick may have his work cut out for him though, because it looks like Ridge could be up to something. In the B&B promo video for October 10th Caroline and Ridge are having a heated conversation. Caroline argues, “You’re asking me to turn my back on every promise I ever made to him.” Ridge counters back, “No, I’m asking you to be true to yourself.” At this point the CEO position should be the least of Rick’s worries, because Ridge has worked his magic on Caroline and has her wrapped around his finger.

So B&B fans, who do you think deserves to be the next CEO of Forrester Creations? Will Eric choose Ridge or Rick? And, what do you think Ridge and Caroline are arguing about? Is he asking her to betray Rick? Let us know what you think in the comments below and don’t forget to check CDL tomorrow for more Bold and the Beautiful spoilers.