BY Joanna Mazewski on July 23, 2014 | Comments: one comment
Related : Recap, Television, The Bridge 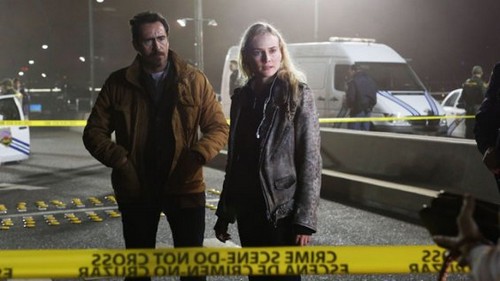 Tonight on FX their original series, THE BRIDGE airs with it’s second episode of season 2. On tonight’s episode called, “Sworrowsworn,” Sonya and Marco make an unsettling discovery as they continue to track Eleanor.

On the last episode a bizarre killing attracted attention on both sides of the border. Frye & Adriana found more than they bargained for with their first lead. Eleanor enlisted the help of a young boy. Story By: Elwood Reid, Teleplay By: Damien Cave & Elwood Reid; directed by Daniel Sackheim. Did you watch the last episode? If you missed it we have a full and detailed recap, right here for you.

We will be blogging The Bridge’s third episode of season two with all the up-to-the-minute details at 10PM EST so make sure to come back to this spot and watch the show with us. Make sure to refresh often so you get the most current info! In the meantime, sound out in the comments and let us know what you think of the series. In the meantime, check out the sneak peek video of tonight’s episode below.

Sonya is still fooling around with Hobbs’s brother. He apparently wants to keep seeing her regardless of the somewhat frightening warning he received from Wade the other day. It’s not like Sonya can keep a secret. If she can tell him the sex isn’t as good as the first time then she can tell her friend what she’s been up to.

But, thankfully, the case with Nacht is commandeering most conversations at the office. They found the other teenager that saw her washing blood off of herself. He had told them about Kyle. Dex came forward when he didn’t hear anything from his friend nor seen him since the incident with Nacht. So Marco told him not to worry that they were going to find Kyle.

However, as the audience already knows, Kyle is dead!

Kyle’s parents weren’t even aware of a problem. Kyle has always been a troublemaker so him stealing the car wasn’t anything new. But the cops showing up at the door was. Like usual, Sonya didn’t mince words and it made the father fear for his son.

Though no one can pinpoint what Nacht’s role is and what she wanted to do with Kyle. The DEA agent implied it might be sexual and then he got serious when he said that “maybe” she’s a bigshot in the cartel, but he knows more than he was letting on and Wade picked up on it. Joe had left room for doubt seeing as Marco was in the room with him. Yet Wade made Joe tell him who they’re dealing (once Marco and Sonya had left) and the agent identified their suspect. Nacht is one of Fausto’s money people and if they can bring her down then Fausto won’t be far behind.

Taking down Fausto has always been complicated. The Drug Lord has managed to stay in power this long because the powers that be allowed him to do so. And that’s why Nacht is so important and why Joe doesn’t want Marco hanging around the case. He knows he’s right not to trust the Mexican official.

Most of them are corrupt in dealing with Fausto. It looks like the only people willing to challenge the man’s authority are street kids. A couple of them held up Ray while he was making a shipment and unfortunately they kept Ray alive afterwards which will lead Fausto into believing it was an inside job. Charlotte wanted to stick around though. She thought that they could explain themselves or possibly go to the police with information and Ray talked her out of it. He told her their best chance at survival was running. Cesar had ditched them by then so what’s the point of staying. Then he suggested Alaska because he supposedly knew for a fact that Mexicans didn’t like the cold.

He was smart to suggest running as their first and only option. The informant that Daniel and Adriana had found was soon murdered after his meeting with them. He had told them too much and them finding his boyfriend’s body alerted the wrong kind of people.

Steven found a man that had been one of the cops that abused Eva and at first he wanted to be lenient. But he made the mistake of asking Eva what had happened to her during her captivity and hearing the ugly truth filled him with rage. He went back to the man he had considered letting go and built him to a pulp.

Nacht found Dex. Yet when the time came to bring him to Kyle – she changed her mind. He had wet the bed so she felt bad for him. And to be merciful – she told him where he could find Kyle knowing he would pass on the message. She said he was with the butterflies.

Sonya remembered the butterflies from the time her sister took her to the exhibit so she was able to lead the rest of the force to Kyle’s body. Nacht had stuffed into a barrel of water similar to how Marco lost his son. But Nacht hadn’t left the scene even though it was crowding with cops – she stuck around to see the reaction of her handiwork.