BY Kristine Francis on July 16, 2014 | Comments: one comment
Related : Recap, Television, The Bridge 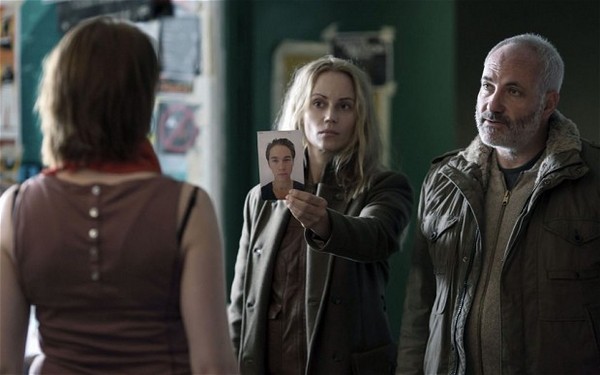 Tonight on FX their original series, THE BRIDGE airs with it’s second episode of season 2. On tonight’s episode called, “Ghost of a Flea,” a bizarre killing attracts attention on both sides of the border; Eleanor gets help from a boy.

On the last episode Sonya met a man connected to her past as Marco discovered he was no longer safe in his own department. Frye & Adriana investigated the origins of the “money house.” A mysterious woman crossed The Bridge into El Paso. Written by Elwood Reid; directed by Keith Gordon. Did you watch the last episode? If you missed it we have a full and detailed recap, right here for you.

On tonight’s episode a bizarre killing attracts attention on both sides of the border. Frye & Adriana find more than they bargained for with their first lead. Eleanor enlists the help of a young boy. Story By: Elwood Reid, Teleplay By: Damien Cave & Elwood Reid; directed by Daniel Sackheim.

We will be blogging The Bridge’s second episode of season two with all the up-to-the-minute details at 10PM EST so make sure to come back to this spot and watch the show with us. Make sure to refresh often so you get the most current info! In the meantime, sound out in the comments and let us know what you think of the series.

Nacht was found naked by two teenagers by the rail tracks. She was getting rid of some leftover blood on her and yet she convinced one of the teenagers to stay and “help” her. She made him get her new clothes and in return she promise to let him touch her down there. However things got weirder between them. When he took her back to his house to borrow some clothes from his mother, she went exploring. And one of these trips lead to his little brother’s room.

Nacht was fascinated with the child. She made sure her rescuer told his sibling goodbye before they left.

The entire interaction was weird and yet Nacht might just not kill that foolish teenager. It seems she’s in need of a new second because she killed the last one. She killed him and then staged a very out there kind of scene. Later on, Sonya and Wade came upon it. Their victim was killed and then placed in a car that was left going in circles. Like his killer wanted to draw attention to the crime. But that’s not what threw them. It was the dead dog inside of the car that did it.

And as their investigation continues – the body count rises. Meanwhile Marco goes about his life occupying it with women and alcohol. His usual crutches during any time of crises. Until, he suddenly snapped. He noticed an officer following him on his off time and chose to confront the man when they were both at the precinct.

That lead to a bloody fight between the two of them that no one was going to step in stop. Then the sergeant put an end to it. Although not because he wanted to. Rather, he was finding it all entertaining but he didn’t want the new District Attorney to go around telling tales.

The dog was working with a DEA agent and now “his people” want to take over the case. DEA Agent Joe McKenzie had assigned the dog with one of his agents. With the agent missing – this murder case is their only link to finding out what happened. And it more than a case too. Joe personally trained the officer that’s missing.

Sonya doesn’t like having to work with (more like for) the DEA. They’re pushy and slightly judgmental. When they heard about the only suspect they have – they instantly discounted her because it was a “her”. They refused to believe a woman could have power in the cartel so they left her to Sonya who wisely didn’t underestimate her.

Sonya found surveillance footage of their victim and Nacht – she put out an APB without notifying the DEA. Wade eventually had to task for it. It doesn’t matter if she acts alone. The DEA won’t like being cut out and they have the power to assume all control if they want. So Wade warned Sonya and out of fear or nervousness – she revealed she slept with Dobbs’s brother. It was gut reaction from her and Wade appeared to have accepted the news calmly.

But he was far from being nonchalant on the whole scenario. Wade went out and found Jack Dobbs. He needed to make sure the other man understood he would no longer be required in the area once his brother died.

Daniel and Adriana found a lead on all the money they found last season. But they aren’t getting any answers from the drag queen they were investigating. The moment she realized they wanted to discuss the going-ons in Mexico – she clammed up. She’s going to tell them a thing. Especially nothing about the cartel.

When Daniel tried to push the issue – he got punched. Though the drag queen did end up saying he was sorry. He found them after he got off of work and asked them to find someone for him. He thinks his boyfriend is in trouble and he needs them look into it.

And the drag queen was right. Daniel and Adriana went to his boyfriend’s apartment and they found bank slips and a dead body.

But Marco is even more trouble than they are. He was awakened in the middle of the night by a fellow officer. Afterwards he was brought to a house to face his captain. There, he was told he was going to be working on the murder case with Sonya. Apparently, the victim was an important enforcer and now Fausto wants the woman that travelling with one of his men – Nacht – to be brought to him before the Americans can get their hands on her.

Marco was told it was a good deal. One he could not afford to refuse and so he didn’t. He got to working on the case as fast as possible.

It won’t be hard looking for Nacht. All anyone has to do is find the trail of bodies she leaves behind. The latest addition happens to be the boy that helped her. She changed her mind on his usefulness when he became redundant. After he told were the other teenager lived – she killed him!