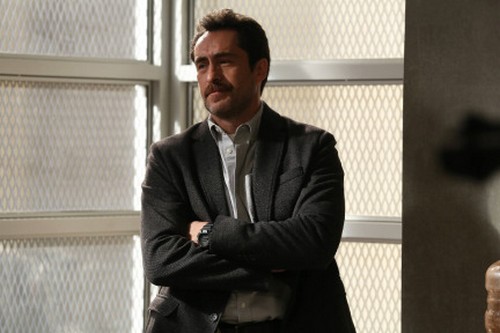 Tonight on FX their original series, THE BRIDGE airs with its premiere episode of season 2. On tonight’s episode called, “Yankee,” Sonya meets a man from her past; Marco discovers he is no longer safe.

For those of you not familiar with the show, The Bridge is a crime thriller starring Diane Kruger, Demian Bichir, Annabeth Gish, Thomas M. Wright, Matthew Lillard, Emily Rios and Ted Levine. When the body of a cartel member is found on US soil, Sonya Cross (Diane Kruger) from El Paso PD and her Mexican counterpart, Marco Ruiz (Demian Bichir), must work together to solve the case.

On tonight’s episode Sonya meets a man connected to her past as Marco discovers he is no longer safe in his own department. Frye & Adriana investigate the origins of the “money house.” A mysterious woman crosses The Bridge into El Paso. Written by Elwood Reid; directed by Keith Gordon.

We will be blogging The Bridge’s premiere episode of season two with all the up-to-the-minute details at 10PM EST so make sure to come back to this spot and watch the show with us. Make sure to refresh often so you get the most current info! In the meantime, sound out in the comments and let us know what you think of the series.

Tonight’s return of “The Bridge” opens up to a blood bath. The murder involved (albeit in different way) Both Monte P. Flagman and newcomer Eleanor Nacht. So that must means the Cartel sanction such an action. But that’s all that’s known. We know the players and not the toys they played with. It’s a complete mystery on who was killed?

The Mexican police have been moving out in squads recently to clear up the drug trafficking problems. However Marco is having trouble trusting his own people. Since assaulting one of them for the part they played in the underground sex trade – he’s been getting suspicious. What if his own men are prepared to take him out in order to return to their old habits?

And Sonya who’s always had issues before all of last year with David Tate is still on the job even though she’s been obsessing over the man that killed her sister. He isn’t in the best shape right now and yet Sonya watches him as much as she can whenever she can.

Nevertheless, she’s different to Marco. Sonya sees a killer and doesn’t want to kill him. Marco on the other hand had felt like no one besides himself should have the honor of killing David. So at least’s Sonya isn’t coming from a dark place as she watches the prisoner. She’s not seeing him as prey.

Dobbs is dying and for some unknown reason Sonya feels pity for him. She was just mentioning her visit to Wade when they could hear Eva’s screams from the back of the house. Although the man that was watching her and that had continued to stay parked in his car even as he saw two gun wielding Americans – wanted to be seen. He was one of the men that had attacked Eva. And he wanted her to know that they found her.

Sonya went to Marcos’s believing that regardless of what’s happened in the past – he could be reliable and he let her down. What she told him was only a confirmation of his worst fears. The Juárez police wants him dead because he interfered. So he told Sonya she’d be safer by staying away from him. And Sonya was so disgusted with his defeatist persona – she took his advice.

Marco’s advice but not Wade’s who in all fairness she should have listened to. Wade warned her to keep away from Dobbs and Dobbs’s brother, Wyatt. And Sonya ignored him. She keeps wanting to speak to the brother like they have a reason to bond and going as far to make herself laugh at his jokes.

It’s weird and keeps heading down the same path. Sonya wants answers from him about his brother and he can’t give her any. Yet she brings him into her world regardless. Sonya begins sleeping with Wyatt and soon she’s going to have to ask herself if she really is sleeping with him because of interest or is she trying to find a way to get into Dobb’s head anyway she can?

Since we last saw Daniel, he had broken his sobriety. Though he tries to excuse that to the few people that still manage to care about him like Gary who reminds him to attend an AA meeting once in a while. Because Daniel thinks he has his drinking under control now. As if only having two beers a day will suddenly stop his alcoholism!

Admittedly, he’s so far still been stable enough to do his job and investigate. Not even his number one partner in crime, Adriana, has found a reason to complain. Then again her sister hasn’t exactly been found so that might have distracted her.

Juárez isn’t a safe place for young and unaccompanied girls anymore. Marco tried to put an end to it and that’s left him with a target on his back.

Perhaps the new prosecutor will be different. He entered the picture along with the new president and the way these new presidents go – they try to clean up the corruption if at no other time than the beginning. So there’s a chance this prosecutor that Marco was asked to personally show around will come in handy.

He’s been drinking and overall getting sloppy. And this is making him an easy mark. He’s only ever at three different places at any given time – his home, work, and a whorehouse. Does that seem safe?

Eleanor Nacht, the cartel’s hitwoman, is good at her job and she’s heading directly towards Charlotte Rusty this season. And while she works her way to them – she leaves behind an infamous blood trail that will capture the attention of all the major players. Sonya, Marco, and Daniel may come to regret wanting to cross her path!