BY Kristine Francis on July 30, 2014 | Comments: one comment
Related : Recap, Television, The Bridge 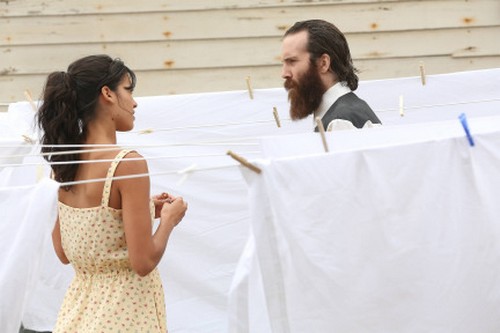 Tonight on FX their original series, THE BRIDGE airs with it’s fourth episode of season 2. On tonight’s episode called, “The Acorn,” Marco gains a new ally. Meanwhile, Charlotte and Ray discuss their future.

On the last episode Sonya & Marco made an unsettling discovery as they continued to track Eleanor. Charlotte’s business took a hit. Eva & Linder were reunited. Written by Dario Scardapane; directed by Stefan Schwartz. Did you watch the last episode? If you missed it we have a full and detailed recap, right here for you.

On tonight’s episode Marco gains a new ally while discovering the true extent of Fausto’s reach. A disruption at a local bank provides new intel to our Detectives and Reporters. Charlotte & Ray discuss their future. Written by Patrick Somerville; directed by Colin Bucksey.

We will be blogging The Bridge’s fourth episode of season two with all the up-to-the-minute details at 10PM EST so make sure to come back to this spot and watch the show with us. Make sure to refresh often so you get the most current info! In the meantime, sound out in the comments and let us know what you think of the series.

Eleanor Nacht left a path of destruction in her wake. Mr. DeLarge, the banker Eleanor had to deal with, is being held up for money by not only the cartel but by his assistant Timmy as well all because Eleanor wanted to teach him to never spill anything on her by cutting off one of his ears. And another thing Eleanor did, this time unknowingly, was to rob Sonya of what little time Dobbs has. Following the trail of bodies took up a lot of Sonya’s time and her sister’s murderer passed away before Sonya could be called in so she was strangely distraught.

No one could have comforted her. Especially not Dobbs’ brother whom she’s formed a weird attachment to in these last few weeks. However there are bigger fishes to fry than her weird obsession with the Dobbs’s brothers.

Marco was approached by Abelardo. It seems the other man is tired of dealing with Fausto and his thugs so he wants to rid the police department of all dirty cops. But enlisting Marco to help is the real problem for him. If he could get Marco on his side then together they could topple the whole of Fausto’s empire. Yet without him – Abelardo is stuck at picking low bearing fruit. So he went to Marco and tried to appeal to the other man’s better nature.

He told them about the dirty cops and the teenagers that were recently killed and nothing appeared to reach or even tug on Marco’s sensibilities. Why not? Well, he freely admits he’s been in this position before. Some up and comer wants to take Fausto down is nothing new and it always ends the same – a high-ranking call is placed and suddenly the do-gooder stops looking into Fausto. The man is untouchable and sooner Abelardo figures that out the better. At least in Marco’s opinion.

Daniel and Adriana on the other hand think they can break a story about money laundering. Though their story was a little too close in delving into Fausto’s business.

They were trying to track the money that was crossing the border at an alarming rate and they stumbled upon DeLarge. Quite a big name in the organization so really all it took was a few pointed questions and the man clammed up right in front of them. He asked them to leave but he soon left the building as well. Sounds odd and yet it’s perfectly explainable. You see DeLarge shot himself in the parking lot. He did because he knew it wasn’t going to end well with reporters camping out on his front door so he chose to opt out of the game entirely – with the only way that could keep his family safe.

He killed himself and stopped the questions he knew were going to keep coming and his death also happen to open an investigation. Daniel and Adriana didn’t want to give up any of their leads to the cops but none of that mattered when the police realized they still had all of DeLarge’s burner cells. The man had told his assistant to get rid of it immediately and Tim ignored him seeing as he could get away with that type of behavior. And the phones were used to make one-way phone calls – all leading to Mexico.

Sonya brought Marco with her thinking he would be of great help on the other side and he wasn’t. Everywhere he went he – he ran into Fausto’s men and they knew how to twsit the screws in. So Marco was stuck. There wasn’t anyone on his side of the border than he could trust. And that’s why he had to turn to Abelardo.

He made a deal with him. If Abelardo could take down Captain Robles then Marco was going to help bring down Fausto and who better to help than Eva. She can testify to all sort of things that happened with the good captain permission.