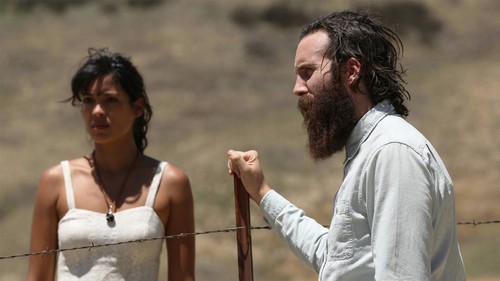 Tonight on FX their original series, THE BRIDGE airs with it’s sixth episode of season 2. On tonight’s episode called, “Harvest of Souls,” Frye makes a career move. Meanwhile, Eva takes matters into her own hands.

On the last episode Sonya and Hank discover the depth of the crimes against Eva; Marco confronts an old nemesis. Did you watch the last episode? If you missed it we have a full and detailed recap, right here for you.

On tonight’s episode Eva’s case hits a wall putting Marco and Sonya in the cross hairs; Jack Dobbs digs up his past.

We will be blogging The Bridge’s sixth episode of season two with all the up-to-the-minute details at 10PM EST so make sure to come back to this spot and watch the show with us. Make sure to refresh often so you get the most current info! In the meantime, sound out in the comments and let us know what you think of the series.

Sonya is someone that can overlook small nuances. And, unfortunately, for her everyone else knows about it so they use that to their advantage. Ruiz was able to excuse his overlong absence by claiming his ex-wife called him up needing his help with one of their daughter. Although Sonya knows how much Alma still resents him so why would she let him that use that excuse?

Pintado doesn’t Ruiz that well hence he bought whatever Ruiz sold him. However Sonya has been through a lot with Ruiz and she knows by now when he’s lying to her. But she let it slide and that’s becoming a habit with her. She’s still involved with Jack. So much so that she gave him a key to her place. Something she knew would obviously disappoint Wade (the father figure she lives for) though she did it anyway.

And the most frightening part is that Jack isn’t worth it. Not any of the hassle she’s getting by being with him. All she knows about him is that his brother killed her sister. When the truth there’s more to him than that. Jack went to an old camping site his brother used to take him to and he found a body buried there.

The most logical thing for him would have been to report his findings to the police or to Sonya if that made him more comfortable, but he covered his tracks as if he wanted to hide what he found. So is this Dobb’s brother any different than the other one?

As for Pintado, he believed the rest of his case was going to easily fall into place for him. And that the danger he nearly ran into was most likely a one-off. Even though Fausto is notorious for not working like that – if that man sees a threat then he’s bound to eliminate it! So the bodyguard Pintado had soon disappeared when he needed the other man the most. Leaving Pintado in the situation to get snatched right off the street in front of a slew of witnesses that did nothing to help him.

Pintado’s body was found a few hours later and the scene of the crime itself was a complete mockery. It was cover-up that didn’t try to be anything else. There were false witnesses and evidence lying around everywhere Ruiz and Sonya looked. And on top of that – one of the Juárez officers on the scene was the same man that attempted to abduct Pintado the first time before Sonya stopped him. He smirked at the scene and taunted Sonya all the while knowing she couldn’t anything to stop him.

That’s simply what happens to do-gooders in Juárez – they’re left to fend for themselves. Daniel and Adriana on the other hand wanted to be different. They continued to look into Fausto’s network and so they put a target on their own backs. They had gone to visit Sebastian Cerisola at his place of business no less expecting him to come down and answered some of their questions.

But, like they should have guessed, that didn’t work. Sebastian wasn’t going to be pushed into doing anything so they were forced to leave his business without ever having seen him. When he actually saw them. He watched as they left and told one of his men to find out everything about them.

And that’s probably when he found out that they were going to be publishing their little article. Daniel and Adriana had gotten an interview with one of his hit-men describing Sebastian’s involvement with Fausto’s organization. It was going to be the story of the year. Then for some reason or another Daniel’s editor stopped the story. He said he didn’t want to be held accountable if Sebastian’s people were going to sue. And because Daniel could print any names to go with his story – he got angry. He may have even said certain things he’ll come to regret. Things that led to him getting fired for instance.

But it’s too late to go back!

Daniel was counting on that story to keep him and his partner safe from retaliation. That plan failed so now they have to worry about how they’re going to survive with a story that almost nearly got published.

When Eva found out that Pintado died – she pulled out of the investigation. Earlier she had found Steven’s hostage in the shed and she wanted to convince him to let the courts handle it. Then after Pintado, she killed that man in the shed herself. And Steven helped her hide the body. He’s always been willing to do anything to protect her. Only this time she wants to protect herself and killing the people that come after her is merely one albeit effective way to do it!

Sometimes people have to work outside of the law and tough Sonya is a sticker for what’s right – when the timing called for it even she bent her principles to fit herself. She and Ruiz want to finish Pintado’s investigation and in doing so they killed two Juárez officers.