The Bridge Live Recap: Season 2 Episode 5 “Eye of the Deep”

BY Kristine Francis on August 7, 2014 | Comments: one comment
Related : Recap, Television, The Bridge 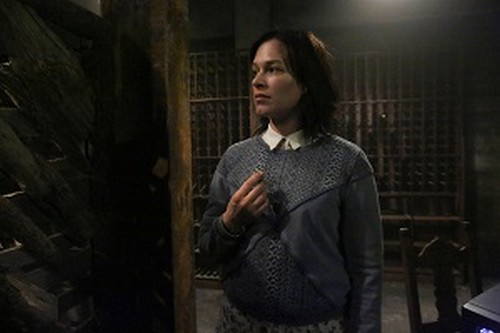 Tonight on FX their original series, THE BRIDGE airs with it’s fifth episode of season 2. On tonight’s episode called, “Eye of the Deep,” Marco confronts an old enemy. Later, Frye gets a proposition from the DEA.

On the last episode Marco gained a new ally while discovering the true extent of Fausto’s reach. A disruption at a local bank provided new intel to our Detectives and Reporters. Charlotte & Ray discussed their future. Written by Patrick Somerville; directed by Colin Bucksey. Did you watch the last episode? If you missed it we have a full and detailed recap, right here for you.

On tonight’s episode Sonya and Hank discover the depth of the crimes against Eva; Marco confronts an old nemesis.

We will be blogging The Bridge’s fourth episode of season two with all the up-to-the-minute details at 10PM EST so make sure to come back to this spot and watch the show with us. Make sure to refresh often so you get the most current info! In the meantime, sound out in the comments and let us know what you think of the series.

Fausto wants to bind Ruiz closer to him and the other man even gave him the perfect idea on just how to do it. Ruiz wants his chance at Tate and as father himself, Fausto, can understand how much you may hate the man that killed you first born son. So with his people already on the inside making Tate’s life a living hell – he offers Ruiz the chance to kill the man. But there are a few conditions that come with any transaction. And in this case it means someone has to stop Sonya from looking into Nacht.

Sonya is getting a little bit too close in her investigation. She nearly came upon one of Fausto’s main middleman so Fausto warns Ruiz to stop Sonya or he will find his own way of doing so and they both know exactly what he means by that!

So Ruiz starts to distance himself from Eva’s case. Technically, it was him that recruited Abelardo Pintado in the first place, but when the opportunity came for Pintado, Sonya, and Wade to finally meet up – Ruiz was woefully absent. He didn’t call or bother to make up an excuse. He simply chose not to show and that left his friends having to go through the plan (his plan) without him.

The team went down to Steven’s safe haven and they spoke to Eva. However she was apprehensive about helping. The people she witnesses during and at her attack weren’t just anyone. They were Juárez officials and Captain Robles is known to have high-ranking ties. So Wade has to ask if she was sure because if she was then corruption in Juárez goes up higher than he thought.

And it’s a troublesome thought that happens to be amplified the longer Ruiz ignores Sonya’s phone calls!

All along Daniel knew someone was trying to help track down the money laundering across the border but never in his imagination did he think it would be a DEA Agent. McKenzie has secretly been putting him on the path towards Fausto. He wants to take down the notorious drug dealer and seeing as any investigation of his has to go through proper channels that McKenzie doesn’t exactly trust – he chose to use Daniel the hard part for him.

Daniel didn’t think his qualifications were needed. Practically everyone knows what’s Fausto has been doing and yet Mckenzie told him why no one else has been able to do anything about it. He told Daniel that he suspects the CIA has been covering for Fausto.

So Daniel knows he’s being used and for that matter Adriana knows it as well. And she doesn’t want to someone else’s dirty work. If the CIA is really involved then she thinks they should slow down. But Daniel doesn’t really want to take that suggestion. This story has the potential to make his career and that’s too alluring to pass up.

Once they were done getting Eva’s full story, Sonya thought that maybe she could go to Ruiz personally to see what was going on. Though Wade advised her against it. It wouldn’t be safe for her to be seen in Juárez and he wouldn’t put anything pass Capitan Robles. Not after what he heard about the man from Eva so Sonya was forced to wait on Ruiz coming to them. And that’s if he ever does.

Because Ruiz has been up to something. He was being very secretive and lying about his plans to his Captain. Though why would he have a reason trust a man that likes to threaten his life would be anyone’s guess.

And do you know what all his plans and hiding from his friends led him to? He nearly fell in with Fausto’s plans for him. Ruiz had snuck into the prison Tate was in and was given ample opportunity to kill the man. But at the very last minute, he realized he wants to be better than all of that. So he caused Tate some further suffering and then left the other man with his heart still beating.

Ruiz walked away to one thing that would have left him in Fausto’s debt and that will most likely have repercussions.

So far there’s been repercussions against Pintado and he all he did (that Robbles is aware of) was cross the border to speak with the Americans. Pintado was nearly killed on the streets in plain view and if Sonya hadn’t been there to stop them (thankfully Dobb’s cremation ceremony was short) then his murder would have probably never been solved.

That’s how brazen Robbles, Fausto, and all other men like them are becoming. So now that Ruiz had decided to not sign on to the otherside then maybe it’s time for him to go back to helping his friends on Eva’s case?