BY Kristine Francis on September 18, 2014 | Comments: one comment
Related : Recap, Television, The Bridge 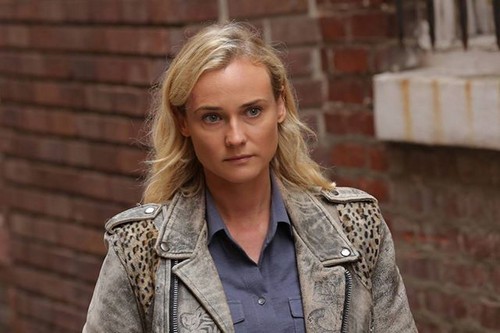 Tonight on FX The Bridge returns with an all new Wednesday September 17, Season 2 episode 11 called, “Beholder.”  On tonight’s episode Sonya faces off with Eleanor. Meanwhile, Linder and Eva discuss their future.

On last week’s episode Marco and Sonya went through the huge fallout. As for Galvan, he made another move. And, it was something that could not be revoked. Meanwhile, Adriana Mendez (Emily Rios) and Daniel Frye (Matthew Lillard) looked into the dark secrets of the Central Intelligence Agency, or CIA. Plus, Hank Wade (Ted Levine) had something important to bargain with. More happened!  Did you watch last week’s episode?  If you missed it we have a full and detailed recap, right here for you.

On tonight’s episode Marco hits a crossroads in his relationship with Fausto while Sonya squares off with Eleanor. Linder & Eva discuss their future. Frye & Adriana uncover a rift between agencies.

We will be blogging The Bridge’s eleventh episode of season two with all the up-to-the-minute details at 10PM EST so make sure to come back to this spot and watch the show with us. Make sure to refresh often so you get the most current info! In the meantime, sound out in the comments and let us know what you think of the series.

Sebastian should never have betrayed Fausto. After all there’s pleny of evidence lying around on what Fausto is willing to do to the people that betray him. Yet Sebastian made his decision and now he has to pay the price – Fausto has his daughter and he’s prepared to start sending body parts as individual messages.

If Sebastian wants to see his daughter again and in one piece then he has to clear Fausto’s name! Because Fausto really believes he can still come out of hiding after everything that’s happened.

Meanwhile Sonya is being investigated for her part in the massacre that resulted in Nacht’s capture. DEA agent Joe McKenzie landed her in hot water with her superiors when he implied they could work together to bring down Fausto. No proper paper work was filed at the time seeing as he distrusted his own superiors. He thought they were in on Fausto’s organization and now that he’s unable to come to his actions – Sonya can only tell people about her second hand information. Which, in all honestly, sounds like a snow job when there’s no credible or substantiated proof to back it up.

Adriana and Daniel are currently looking through Joe’s things and maybe they’ll find something!

So Sonya was left with only Ruiz. She told him about the Feds and CIA covering their asses with Fausto and Nacht. As matter of the fact none of the guys that questioned her earlier appeared to be concerned in any way about Nacht’s victims. And once these two realized they couldn’t rely on the Americans – Ruiz suggested they try getting help from the Mexican officials for a plan he might have in mind.

Due to their prior and some could say well-known relationship, Ruiz knows where Fausto could be and all they would need from his side of the border to get Fausto is the Marines. However Sebastian is undermining all their good work. The second he learned Fausto had his daughter – he doesn’t want to risk Fausto getting caught and doing something reckless in his final moments.

Fausto isn’t the most stable man around. Incidentally, he crashed some young woman’s quinceanera and gave a wad of money as a present. Then things got awkward when he asked her to dance. Like who in their right mind would refuse to dance with a known drug lord and murderer? The entire thing was bizarre to say the least.

When Sonya did get the opportunity to question Nacht – even she told the detective that she couldn’t take Fausto’s odd and often weak behavior. That’s why she had begun to question his leadership and eventually betrayed him. It was his quirks that cost him his empire.

And soon it’s going to be his fondness for Ruiz that ends up costing him his life. The marines agreed to back Ruiz – when it was convenient for them. Though they later had a change of heart after Ruiz brought them to the location. Ruiz’s plan was to bring Fausto in as peacefully as he can and their plan was dependent on winning in a shoot-out.

Hunting down her attackers has finally brought Steven and Eva together. And while she’s now able to appreciate him – it’s still hard for her to handle being touched. Luckily, Steven has been nothing but patient with her. He knows she needs time and is willing to kill time by taking care of Captain Robbles.

Eva thinks they should stop their manhunt. The captain is very high profiled and she doesn’t wasn’t to risk Steven getting hurt. Steven on the hand wants to destroy all the monsters that attacked her so Robbles is in for a world full of hurt. And just doesn’t know it yet.

Sonya has Nacht’s ledger. In it, Nacht transcribed of her actions. That means everything illegal and potential damaging for others is within her grasp. But she made a mistake with the ledger. She let Nacht knows she has it. So later when Nacht ended up being released, by the same people that took Sonya to task for arresting her; her first mission was to get the ledger back from Sonya. By any means necessary!

Hence Sonya is in danger and so is Ruiz. The men he went with were quickly killed by on sight when they fell for a ploy. Someone had sent out a kid on the same pathway Ruiz was traveling and when Ruiz was forced to intervene between his men and a seemingly innocent kid – his men were killed.

Was it Fausto or was it someone else that attacked him?