BY Kristine Francis on September 10, 2014 | Comments: one comment
Related : Recap, Television, The Bridge 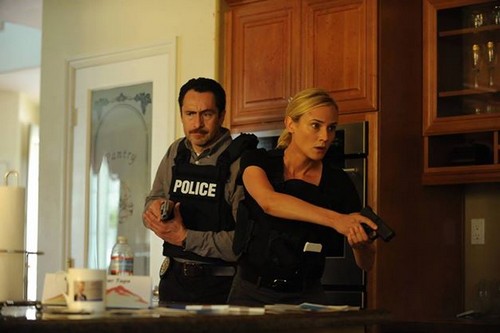 Tonight on FX their original series, THE BRIDGE airs with its tenth episode of season 2. On tonight’s episode called, “Eidolon,” Fausto makes an irreversible decision.

On the last episode Sonya found herself in the cross hairs as Marco raced against the clock; Fausto discovered betrayal. Did you watch the last episode? If you missed it we have a full and detailed recap, right here for you.

On tonight’s episode, Marco and Sonya will go through the huge fallout. As for Galvan, he will make another move. And, it’s something that cannot be revoked. Meanwhile, Adriana Mendez (Emily Rios) and Daniel Frye (Matthew Lillard) will look into the dark secrets of the Central Intelligence Agency, or CIA. Plus, Hank Wade (Ted Levine) will have something important to bargain with. What exactly is it?

We will be blogging The Bridge’s tenth episode of season two with all the up-to-the-minute details at 10PM EST so make sure to come back to this spot and watch the show with us. Make sure to refresh often so you get the most current info! In the meantime, sound out in the comments and let us know what you think of the series.

RECAP: Tonight’s episode of Bridge begins with Eleanor in the bathroom at a convenient store. The clerk notices blood on her while she is buying an energy drink. She heads back to the car, and catches her henchman reading the book she is always writing in. She climbs in the car and directs him to drive down a dark dirt road away from civilization. When he stops driving she demands to know why he look at her ledger, she says it is private. He asks her if Fausto knows what is in her book, and that she has been moving a few decimal points and skimming some off the top for herself. He tells her that he won’t tell Fausto if she lets him see what’s under her dress. Eleeanor stabs him in the neck repeatedly and then climbs out of the car and walks back up the dirt road, leaving him for dead.

Monte FLagman arrives at Charlotte’s house and finds Cesar and Eleanor surrounded by a pool of blood and dead bodies. He orders Cesar to start loading bodies in to the truck, and orders Eleanor to come with him so that they can get her cleaned up. Eleanor begins panicking and says that she can’t leave the house without her ledger. In the car Eleanor tells Flagman that if she dies he needs to burn her body and hide it from the demons, she makes him promise to bury her ashes under an old tree in the desert.
Sonya and Marco head in to the office. They learn that the DEA was there looking for Sonya, and Hank left with them and they didn’t say where they were going. Sonya runs out of the office and says she has to go. Sonya and Marco fly to Charlotte’s house, and when they arrive they find the pool of blood on the floor and splattered up and down the stairs and walls. They find a trail of blood leading outback to a construction site and realize that one of the people that got shot crawled out. They follow the trail, through the dirt and then it just stops. Someone must have caught up to whoever crawled out and took them.

Crime scene investigators come to process Charlotte’s house. There is enough blood to fill a swimming pool, but no bodies. Sonya is scared that Hank is dead. She and Marco try to make sense of what happened and who is responsible, they know it couldn’t have all been Eleanor and her men. Meanwhile, the truck full of dead bodies is dripping blood down the highway and is pulled over by two officers. They find all of the bodies from the massacre at Charlotte’s house in the back.

Eleanor wakes up in a garage, and Flagman’s doctor tells her she is going to be fine as long as she takes it easy because she lost a lot of blood. One of Eleanor’s men arrives with a bloody and unconscious Hank in the trunk of his car. She demands to know why he brought him, her henchman reveals that Hank knows where the ledger is, he hid it. Eleanor orders Flagman’s doctor to fix him up so that she can talk to him.

Sonya and Marco rush to the air conditioning truck and dig through the dead bodies, they are relieved to see that none of the bodies are Hank’s. At the garage Eleanor orders the doctor to wake Hank up, he warns her that if he does it could kill him. Eleanor gives him a shot of something and Hank opens his eyes, she demands to know where the ledger is and Hank tells her to go to hell. She jams her finger in his bullet hole and screams for him to answer her.

Sonya and Marco inherit the driver of the truck, and get the address to where he was supposed to deliver all of the dead bodies. They jump in their car and race to the address. Meanwhile, Eleanor orders Cesar to put Hank in the car. They are going to his house so that she can torture his family until he tells them where the ledger is. Sonya and Marco spot Eleanor and Cesar driving down the road. Sonya crashes in to their car. Eleanor stumbles out of the car and Sonya pulls her gun on her and orders her to get down on the ground, Eleanor passes out and falls to the ground.