BY Amanda Austin on September 4, 2014 | Comments: one comment
Related : Recap, Television, The Bridge 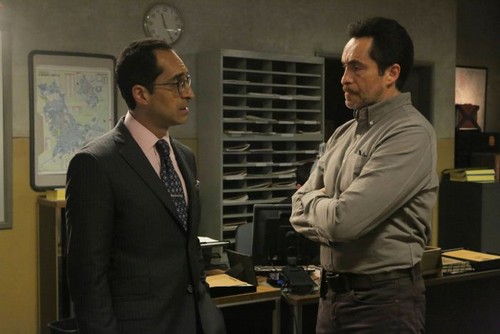 Tonight on FX their original series, THE BRIDGE airs with its ninth episode of season 2. On tonight’s episode called, “Rakshasa,” Fausto is betrayed by his organization. Later, an unexpected rendezvous unfolds.

On the last episode Sonya visited a stranger from her past while Marco’s tainted history was unearthed. Frye took a step too far. Eleanor’s loyalties were tested. A move was made to apprehend Fausto. Did you watch the last episode? If you missed it we have a full and detailed recap, right here for you.

On tonight’s episode Sonya finds herself in the cross hairs as Marco races against the clock; Fausto discovers betrayal.

We will be blogging The Bridge’s ninth episode of season two with all the up-to-the-minute details at 10PM EST so make sure to come back to this spot and watch the show with us. Make sure to refresh often so you get the most current info! In the meantime, sound out in the comments and let us know what you think of the series.

RECAP: Tonight’s episode of The Bridge begins with Romina in a sleezy motel with a man named Paco getting high. She wants more drugs and tries to seduce Paco, but he’s not falling for it. He tells her to go get some money and come back and she can have more drugs. She gets dressed and heads outside to a nearby ATM, while she is stumbling down the street she is arrested by two officers.

Marco finds out that Romina has been brought in to the station and he tells the arresting officer not to book her. He pays her a visit in her jail cell and tells her that she is going to have to call her father, she wants her boyfriend/drug dealer Paco to just bail her out, but Marco isn’t going to let it happen.
Eleanor is in the car with Cesar. She tells him that he needs to bring her Charlotte, and reminds him that he works for her now. She reassures him nothing will happen to Charlotte if she does what she is told to do.

Lt. Hank Wade has two agents in his office waiting for him when he arrives, they demand to where Sonya Cross is. Wade wants to know what deal they cut with Sonya, the agents reveal they need Wade and Cross to “provide cover for their department” during the take down.

Cesar pays Charlotte a visit and tells her it is time for her to meet up with Eleanor, she asks what about Ray, but Cesar says only she is going. They have to leave right away.

Romina’s father Sebastien arrives at the police station to pick her up and thanks Marco for his indiscretion. He tips Marco off that Fausto had someone “take care of Detective Cross,” he sent a man named Chopper to pick her up. Meanwhile, Cross comes to in the back of a white van, she is gagged with her hands tied behind her back.

Chopper pulls the white van over in the middle of the desert and opens the back door. Cross yells that she is a cop and orders him not to touch her. He pulls her out of the van and sits her down on the ground while he smokes, she begs him not to kill her. He informs her it is his job and tells her that he will make sure the animals don’t get her bones. He grabs a shovel from the back of the van to dig a hole for to bury her in. She tells him that she needs to pee, and he pulls her pants down for her.

Marco pays one of Chopper’s associates a visit and beats him until he agrees to show him where Chopper took Cross. They head out to the desert, meanwhile Cross is trying unsuccessfully to escape but her legs are taped together.

Cesar takes Charlotte to meet Eleanor, she wants her to sign over the house she owns. Charlotte says she has to go to the bathroom and runs upstairs and texts Joe Mackenzie, she says “it’s happening now at the ridge, help.” She heads back downstairs and finds Eleanor’s henchman dragging Chip’s dead body out of the house. Eleanor demands that Charlotte hands over her phone and then reassures her that when the deal is over she will “be free.”

Marco arrives at Chopper’s van and Cross is nowhere in sight. Marco shoots Chopper while he is digging the hole to bury her, and then runs off to find Cross. She is passed out in the middle of the desert, she dropped from heat exhaustion while trying to escape. Marcos finds her laying in the sand, and comforts her and informs her that Chopper is dead.

After the paperwork is signed, Cesar sees the police on the security camera. Eleanor demands Charlotte tell her what she has done. She starts hitting Charlotte, and the DEA agents barge in with their guns on Eleanor. While Eleanor and Cesar are standing with their hands in the air, another group of men from the cartel run in with machine guns and mow down Eleanor and her men, Charlotte and the agents. Eleanor and Cesar survive the melee, but Charlotte is dead.