BY Kristine Francis on August 27, 2014 | Comments: one comment
Related : Recap, Television, The Bridge 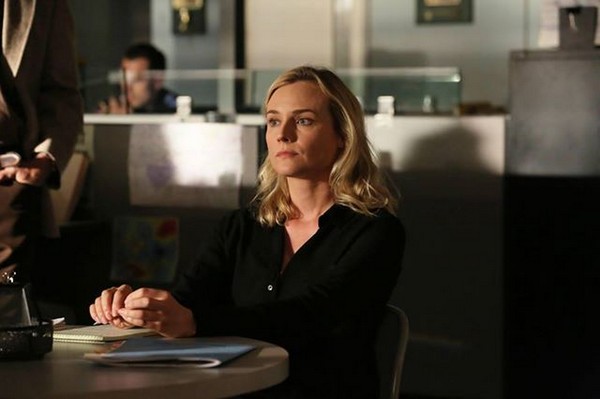 Tonight on FX their original series, THE BRIDGE airs with its eighth episode of season 2. On tonight’s episode called, “Goliath,” dark secrets from Marco’s past are uncovered. Meanwhile, Eleanor’s loyalty is tested.

On the last episode Ruiz did want to find justice for Prosecutor Pintado, although not like this. Ruiz had to explain his own part he played in two officers’ deaths. So he took all the evidence Pintado had including the affidavit Eva signed that said Robbles was one of the men that raped her and pressured his Captain to keep quiet on Sonya’s involvement in the shoot-out. And then he made it seem like the officers he killed were the ones directly responsible for Pintado’s murder. Did you watch the last episode? If you missed it we have a full and detailed recap, right here for you.

On tonight’s episode Sonya visits a stranger from her past while Marco’s tainted history is unearthed. Frye takes a step too far. Eleanor’s loyalties are tested. A move is made to apprehend Fausto.

We will be blogging The Bridge’s eighth episode of season two with all the up-to-the-minute details at 10PM EST so make sure to come back to this spot and watch the show with us. Make sure to refresh often so you get the most current info! In the meantime, sound out in the comments and let us know what you think of the series.

In the aftermath of someone like Lucy (innocent of everything) getting hurt, Adriana decided that for once she was going to be honest and free with information. She told Sonya about the investigation into Fausto’s money laundering across the border after Sonya was able to confirm that the attack was in fact about their story (on case there was any doubt). One of her people had found Daniel’s address written on a piece of paper the armed assassin was carrying around. So her next move would have been protecting Daniel.

But getting to Daniel before he could hurt himself wasn’t possible. He tends to not react well when under pressure so even though Adriana had tried to warn Sonya about him and his often screwed-up behavior – Daniel still found himself in trouble. Feeling like he was going to die no matter what – he then decided to be reckless in what he assumed to be were his final hours. Hence Daniel went and confronted Sebastian Cerisola at the other man’s son’s school no less. And while that could have ended in his disappearance then and there – Sebastian chose to dispose of Daniel by the book. As in he called the cops like any average Joe would have.

Sebastian has been trying to clean up his act recently. That means he’s been trying to distance himself from blatantly illegal activities. Plus, whenever he’s with Fasuto, he cautions the other man to lay off the killing and cut ties with anything that’s potential dangerous. At the end of the day, Sebastian doesn’t want any concrete proof between them and their business to be linked back to them. However Fausto has ignored this sound advice and go about his day with business as usual.

He knows the cops have been on his trail so he sends in his secret weapon, Chopper. Chopper can apparently get rid of enemies without leaving a mess. Which is something Nacht never figured out how to do!

Fausto is sending Chopper after Sonya and in the meantime Sonya is investigating Fasuto. What she really wants is to take down Nacht, but the DEA had contacted her and so she was willing to work with them in order to kill two birds with one stone. Though she was surprised they didn’t want to talk to Ruiz as well. Sonya had thought he would be a major factor in their investigation and she was thrown when she was told they don’t exactly trust Ruiz.

Sonya hadn’t known that Ruiz and Fausto’s relationship went as far back as childhood. Nor had she heard the news that Tate was murdered in prison. So she was forced to look into it and was thereby disappointed when she saw for herself from the surveillance footage that Ruiz had gone to see Tate despite her asking him not to.

Sonya chose to judge him in that very instant for what he might have done rather than what he has done especially in the name of protecting her. It was similar to how she judged Wade when he also didn’t live up to her ideal world of black and white.

But Ruiz hadn’t learned he was being frozen out until much later. Adriana had approached him to release Daniel. Then Ruiz had made some digs towards Daniel for daring to open his mouth about certain things on the wrong side of the border when Daniel had hit back and said that Fausto wasn’t merely acting in Mexico. Adriana’s girlfriend was attacked in the States. And Adriana had pretty much filled in Sonya about all of this so the only one who wasn’t in the know was Ruiz.

Even Captain Robles knew more than he did. The corrupt captain was contacted (more like kidnapped) by men claiming to be the police (though they ignored his own badge) and after a few hours spent with them – he was released and suddenly Fausto little hideaway was found. The police raided Fausto’s place and killed everyone there. Unfortunately for them, Fausto wasn’t a part of the group. He had already escaped via his secret tunnels. His prisoner on the other hand did not.

The police found Nacht’s father so now Nacht no longer owes allegiance to Fausto. She was on the verge of abandoning him anyway by siding with Sebastian in what’s best for business but she had merely agreed at the time in exchange of Sebastian giving her back her father. What is she going to do when she found out? Stay true to Fausto or leave him for Sebastian?

Earlier, Nacht had been following Sonya around and so she saw Sonya interact with her druggie mom. Sonya had wanted to give her mother peace of mind by telling her Lisa’s killer was dead though her mother was too out of it to recognize the significance.

Nacht wasn’t asked to watch Sonya but she did. And while that’s odd – it’s important to know if she ever gave up her side project? Because if she didn’t then she would have noticed when Sonya was kidnapped by Chopper.

Ruiz had wanted to help Sonya and she turned him down. She didn’t think she needed his protection and as it turns out – she was wrong!

Although in other news, Eva finally stopped turning down Steven’s offer to help. So the two of them began hunting the people that hurt her and then making sad people pay. Maybe that’s the only she can heal!