BY Kristine Francis on August 20, 2014 | Comments: one comment
Related : Recap, Television, The Bridge 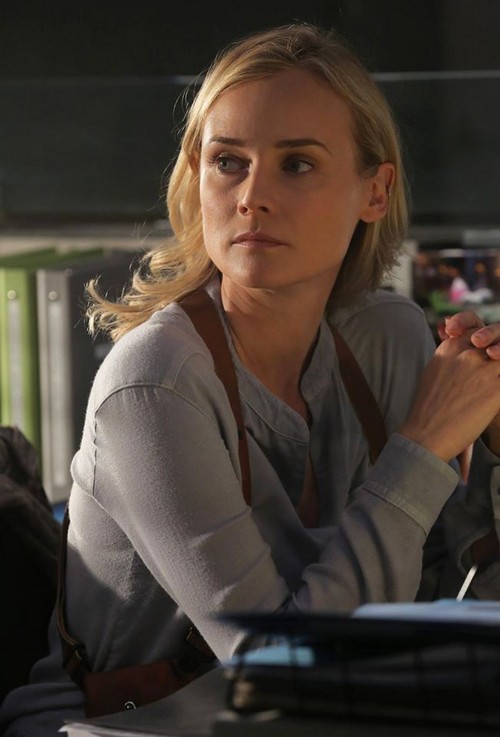 On the last episode Eva’s case hit a wall putting Marco and Sonya in the cross hairs; Jack Dobbs dug up his past. Sonya is someone that can overlook small nuances. And, unfortunately, for her everyone else knew about it so they use that to their advantage. Did you watch the last episode? If you missed it we have a full and detailed recap, right here for you

On tonight’s episode Sonya uncovers the truth behind Lisa’s death. Marco lies on the record. Frye & Adriana make a discovery that has their loved ones in danger.

We will be blogging The Bridge’s seventh episode of season two with all the up-to-the-minute details at 10PM EST so make sure to come back to this spot and watch the show with us. Make sure to refresh often so you get the most current info! In the meantime, sound out in the comments and let us know what you think of the series. In the meantime, enjoy a sneak peek of tonight’s episode below.

Ruiz did want to find justice for Prosecutor Pintado. Although not like this. Ruiz had to explain his own part he played in two officers’ deaths. So he took all the evidence Pintado had including the affidavit Eva signed that said Robbles was one of the men that raped her and pressured his Captain to keep quiet on Sonya’s involvement in the shoot-out. And then he made it seem like the officers he killed were the ones directly responsible for Pintado’s murder.

Sonya hadn’t liked all the lying but she did at least believed in Ruiz’s better nature. She thought they were going to take Captain Robbles down. However that’s no longer possible seeing as she gave her enemy a tool to use against her. If she wants to remain out of trouble for using her weapon outside of her jurisdiction then she can’t go off on the Captain.

And in return she gets to stay safe and Ruiz made sue Robbles was going to stop looking for Eva.

It’s not fair but it’s what everyone has to live with. Anyways her hands are going to be pretty full with Jack. He finally man up and told her about the body he found. He also took her to it. Though he failed to mention this place his brother always used to talk about or the fact his brother loved to discuss certain girls, mind you, before Sonya’s sister went missing. So the body they found might not even be Dobb’s first victim.

Wade believes Jack turn a blind eye to what his brother was and so he blames Jack. The girl they found was identified as a girl that went missing months before Sonya’s sister, Lisa, was murdered and if Jack had merely said something at the time – Lisa could still be alive today. Yet Jack had his own accusations. He told Sonya that Wade lied about his brother pulling a gun on him. He said Wade only lied about that because he didn’t want people to know he shot an unarmed man.

And at first Sonya didn’t want see Wade that way. She grew up and became a cop in order to be just like Wade so to hear he betrayed the badge was incomprehensible to her. Then Wade admitted to her face that, yes, he did shoot Dobbs without cause.

At the time, he had found the other man relaxing in front of TV and all he could think about in that very moment was that Sonya was somewhere else hurting and that this killer didn’t seem to care about the consequences of what he did. So he shot him and now Sonya blames him for never finding out why Dobbs killed her sister.

That is whys she’s been with Jack all this time. She thought he had the answers about his brother and what motivated him. Though at the end of the day she couldn’t look at either of them – Jack or Wade. They both mad stupid mistakes that cost her answers and according to her she doesn’t want liars in her life.

But that golden rule of hers doesn’t seem to apply to Ruiz who remains on the fringes if not directly involved with her. Ruiz has lied for her and to her. On a deeper level she knows that but she doesn’t want to face it quite yet. She doesn’t want to delve into all of his lies because in a way she’s similar to Jack. On the night the girl went missing, his brother came home after claiming to have gone to the movies all muddy and dirty.

Dobbs had tried to hide his appearance by sneaking into his room that night so that his parents wouldn’t notice and yet his thirteen year old brother saw him. And Jack hadn’t said anything. Not then and not when a girl came up missing on that very same night. Truthfully, he was a kid and probably didn’t want to get his big brother in trouble.

The same can’t be said for Sonya. Because while she’s done what Ruiz told her to do – dropping the corruption case in Juárez without question – others haven’t. Daniel and Adriana are still working it despite one of them getting fired from the paper. And their investigation eventually found itself onto Charlotte’s doorstep.

Fausto has been in hiding since the new president came into office so it’s not like he’s been keeping up to date with what’s been going on. Nevertheless, that in no way means his little soldiers aren’t still out there running the business and Fausto had left Nacht in charge of problems. He knows she has a special tact in that area.

So it was Nacht that showed up after Charlotte and Ray called in. A little insight into her character revealed Fausto violently imprisoned her father after years of the older man abusing his daughter and that’s why Nacht is as loyal as she is – without Fausto she never would have gotten revenge. So to return the favor she removes obstacles in Fausto’s way. And later when someone broke into Adriana’s apartment and attacked her girlfriend – we all knew it wasn’t some random break-in. Lucy was able to disarm her attacker, but not before it was too late for herself. Adriana came home to find her bleeding out.

As for Daniel, the only time he’s sober is when he’s investigating which means if he’s next then he’s a sitting duck because without Adriana to monitor him – he drinks!