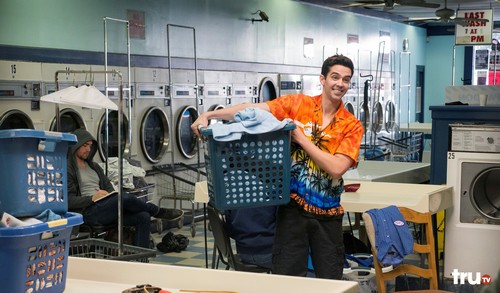 Tonight on TruTV is the return of The Carbonaro Effect with a new episode called, “It’s a Makeshift.” On tonight’s episode a drop of Uber detergent is all it takes to get your laundry fresh and clean.

On last week’s episode in a Mexican restaurant, Michael treated incredulous diners to a good luck serpent with their tableside guacamole, and made salsa so spicy it melted metal. Then, he confused office coworkers with a never-ending brown bag lunch and a frozen meal that turned out to be alarmingly fresh. Plus, he confounded his new assistant with some tricks of the trade as a real estate agent, including freshening dead flowers right before her eyes. Did you watch the last episode? If you missed it we have a full and detailed recap, right here for you.

On tonight’s episode Michael mystifies laundromat patrons by impossibly multiplying miniscule amounts of detergent, and makes one man’s day when he convinces him that he’s hit the coin machine jackpot. Then at a thrift store, Michael taps into his musical abilities by turning into a human record player. Plus, as an employee at a shipping store, he astonishingly flips a full bowl of punch without spilling a drop and repeatedly teleports a glass penguin to one customer’s dismay.

Tonight’s episode begins with Michael in a Laundromat using some detergent that he describes as “German-concentrate stuff” that allows him to get hundreds of loads out of a very small box. He asks the man next to him how many loads his big box yields. The man is amazed when Michael brags that the few sprinkles of detergent he puts in his hand, easily turns into a large amount of powdered detergent just from a few shakes. Michael tells him he is not getting his money’s worth if he is still using that old detergent. The poor guy is standing astonished…wondering where he can find the amazing detergent Michael has!

In the next Laundromat scene, Michael is busy doing laundry when he talks to a woman nearby. He shares that it is the last day of work for him and he is going to Cancun. She is nice and chats with him. Michael holds up a large sheet that he seems to plan to fold as he has it stretched, and before the woman’s eyes, he moves the sheet as if to finish folding it and has somehow changed from his work clothes into his beach attire for his trip. She shakes her head and ask how he did that because she sees his shirt on the chair but she didn’t see the sheet move at all! Michael smiles and walks out, promising to send her a postcard.

Still pranking at the Laundromat, Michael asks another patron for a different dollar bill since his is torn and won’t be accepted in the change machine. A man is nice and gives him another dollar. Michael is amazed that the serial number on the dollar matches the picture on the change machine. He is amazed and shows the man. He tells him that since this is so unique, the man (who gave him the bill) should put it in for change. He obliges and after the dollar goes in, the change machine turns into a slot machine—sounds and all—and starts spilling out quarters upon quarters. Michael tells the customer he must have been the lucky winner with the matching dollar bill. The man cannot believe it and begins scooping up his winnings.

Michael is working at a thrift store and is collecting clothes as donations. As a woman drops off some clothes and shoes, she is amazed when Michael pulls a scorpion out of one of her shoes! He tells her they like the smell of feet. The woman cannot believe the scorpion was in her shoe all this time. Michael reminds her to check her shoes and socks at home!

The next donor drops off some old records. Michael wants to check them out while she is still there and asks her if they are any good as he makes small talk. He begins to listen to the old 33’s and 45’s by running his hand along it. Music starts playing and the woman cannot believe it. He explains that the vinyl plays somewhat like an instrument because of the way it is made so anyone can play it that way. The woman is in awe as he plays album after album just be using his finger.

Next, there is a DVD that is unmarked and he pulls his eyelid down and hold it to his eye, telling the woman he can see it is a western. She believes he can actually see some of the movie playing! She asks if she can do it too, and cannot understand why she doesn’t see the movie he sees.

Michael shocks another lady who wants to buy a piece that just happens to be the same type of piece noted on the sign that says it is free today. The wild part is, she put together the item and labeled it a “golden lamp stand” which just happens to be what the sign says is the special for the day and is free!

Michael is now a customer who is trying to purchase a little decoration that looked like a mounted butterfly. The framed piece was only $2 so Michael says he wants to buy it. Just then as he holds the piece to get his money out, the butterfly comes to life right in front of everyone’s eyes! Really amazing since the piece was in the shop and the butterfly was obviously not real. Everyone in the store gathers around to see the butterfly who came to life!

At a mailing/shipping store, Michael is asked to mail a snow globe. He thinks it is very nice and shakes it around to see the snow and one of the pieces from within drops out! The guy cannot believe it but Michael tells him this happens all the time. Michael offers to tape the piece to the side so it is not lost and the man goes to looks at the tape and sees the piece has somehow gone back in! The customer walks out stunned.

Two customers come in and Michael asks them to please grab a box on the ground for him as they walk up to the counter. They are trying to figure out which way is up because the box has arrows going more than one direction. Michael is flipping the box upside down, sideways, and all over the place. He opens it and takes out a full punch bowl that is completely neat and full of punch. The women cannot believe it, but Michael explains that there is a great party store that promises same day delivery…he just didn’t realize they’d send the punch like this!

The next customer wants to mail a glass piece but Michael explains that he cannot wrap glass due to their policies. He gives the box and bubble wrap to the man who wraps his item and boxes it up. They seal the box and Michael turns away. When both men look back at the counter there is another glass sitting right in front of their eyes. Michael asks if he wanted to ship that as well. The man is confused because he said he only had one! He opens the box and takes out the bubble wrap and sees nothing in it! He wonders how he could have missed it.

He wraps it again, Michael seals everything up, and Michael takes the box to weigh it. When they both look back on the counter, they see the glass again! Michael then explains that he’s seen this before and knows what is going on. When you cannot ship something, he says, it is called the “Carbonaro Effect.” The man finally realizes he is still sane and can finally laugh!