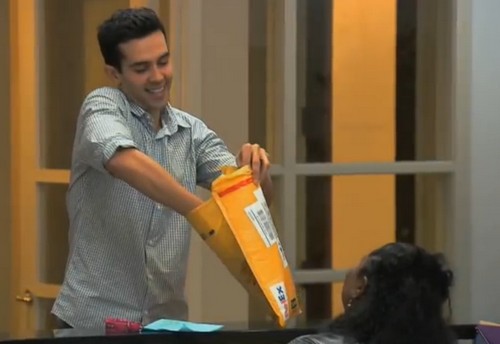 Tonight on TruTV is the return of The Carbonaro Effect with a new episode called, “Don’t Freeze Me.”  On tonight’s episode Michael Carbanaro is at it again to surprise & delight unsuspecting folks on camera. Michael sets up shop in a sporting goods store baffles customers with a mysterious package.

On last week’s episode of The Carbonaro Effect, Michael convinced customers to buy toys that couldn’t possibly exist, like bubbles that turn into Christmas ornaments when you catch them. Then, as a personal trainer, he made a client think he actually sweat enough to fill a bucket. Plus, a security guard panic when Michael made a car disappear on his watch.  Did you watch last week’s episode?  If you missed it we have a full and detailed recap, right here for you.

On tonight’s episode Michael poses as a cashier at a sporting goods store and asks an unsuspecting customer to pick up a small lightweight box off the ground for him. Thinking nothing of it, the customer places the box on the counter, only to be completely stunned when Michael defies the laws of physics and miraculously pulls both a heavy bowling ball and basketball out of the tiny box- resulting in one hilarious reaction you won’t want to miss!

Tonight’s episode begins with Michael Carbonaro working as a sporting goods store employee. When a woman hands him a box from the floor that he asked her to grab for him, he opens it in front of her. The box is the perfect size to pull out the basketball he pulls out. But then, he tells her it was supposed to be a bowling ball they shipped, not a basketball. Just then, he turns the box again and says, “Oh wait! There it is.”

The woman is completely perplexed about #1 how the bowling ball AND basketball both fit in the box, and #2 how it was so light when she held it. Michael plays dumb and seems to be missing her direct questions about how both balls fit in there. He keeps explaining that that is how the warehouse sends them the bowling balls…they ALWAYS pack them with a basketball. Eventually, she gives up asking!

His next customer is a young boy and his mother. After handing over the helmet he had on to Michael, Michael feels around inside of it saying it looks tight for him. It is his helmet from home and used it to play in earlier in the day. Michael is feeling the inside when suddenly he pulls out a mouse from the helmet and the mother goes screaming and running from the counter. Michael asks the boy if he has had the mouse in there all day. The boy laughs and says no. The mom is completely freaked out. Michael tells the boy to be sure to shake the helmet before he uses it next time…to make sure there is no mouse poop.

His next customer comes in and Michael asks him if he knows any baseball players to suggest for the store to sell memorabilia for. The customer, Jamal, says he is more of a basketball fan. Michael pushes him to name one, so he says “Jackie Robinson.” The customer gives Jackie’s retired number “41.” Michael then takes a closer look at the baseball he’s been playing with and sees that it is #41, signed by Jackie Robinson, and….says “To Jamal.” The customer is really freaked out and Michael comments on what a coincidence it is. As the customer walks off with the ball Michael told him to keep, he looks very confused and just keeps starting at the ball.

Next, the pizza boy comes in to deliver a pizza. He gives the total $12.12. Michael hands him what looks like a $1.00 bill. The pizza man asks for the rest. Michael tells him it is all there. But oh, that darn sticky money! He literally pulls dollar after dollar from the one dollar bill, ending up with far more than what was due.

Next, as Michael becomes a barista. The first customer is seriously freaked after Michael makes a hot cup of coffee levitate. Next, a woman is trying to get a pastry from a self-serve glass case. However, the glass case has no openings. No openings…no problem! Michael hands her a tissue to grab her treats and she cannot figure out how to get in to grab what she wants. He finally comes around the counter and takes the tissue, holds it up against the glass, and puts his hand through the tissue and glass and reaches in for the pastry. Her mouth is wide open. He lets her try it when she asks and she cannot figure out how her hand got in there–especially after knocking on solid glass!

The next customer is asked by Michael to wait a moment as he is “rebeaning.” She says she doesn’t know what that means. He shows her how after the used coffee grounds have made a pot of coffee, he places them in a filter, drops the special “rebeaning” oil on them, rolls up the filter, and turns them back into whole beans. She is in disbelief, but she saw it with her own eyes. Or did she?

He tricks another customer into buying a small cup instead of a large because all their cups actually fit the same amount of liquid because of “the metric system” used from the larger pitcher. Makes no sense, but the customer buys it because she saw him pour an entire pitcher into a tiny cup!

Next, Michael is a museum shipping employee who is training a new employee. He needs to send back a boomerang. He handles shipping and receiving and tells the new employee that these boomerangs are supposedly cursed. They had to stop exhibiting them, and they are being asked to ship one back. After they took it down from its location to ship it back, and pack it in a box, they look up and see the boomerang back in the original location. The new employee says he thinks he is losing his mind and that he is now superstitious.

He has another new employee helping him. They are shipping back displays from an animal exhibit. Micahel tells her they need to spray them every so often with taxidermy spray. She just watches as he then packs them up, telling her about how great the exhibit was. All of a sudden she sees the fox come to life and put a dead squirrel in his mouth and run off. The look on her face is priceless! As Michael goes to get the fox back, she tries to spray the other animals, but nothing happens.

Michael comes back to put the fox back in the box. He tells her to spray the box that contains the live fox. He opens it back up and pulls out the stiff display again! She cannot believe it. Easy explanation, he says…they just have to continue to spray the animals every hour or they come back to life…it’s the Carbonaro Effect!