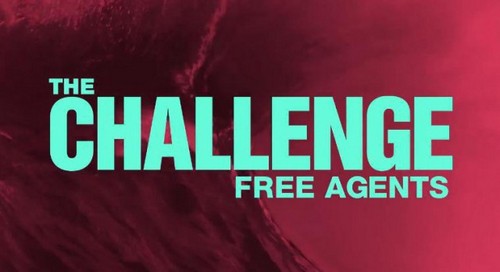 Tonight on MTV their long running reality series The Challenge: Free Agents airs with a new episode called, “Strike a Pose, There’s Something to It.”  On tonight’s show a hookup causes drama and a romance is threatened.

For those of you new to the show, The Challenge: Free Agents is about Twenty-eight money-hungry competitors who arrive in Punta del Este, Uruguay, expecting to be teamed up with an ex, an enemy, or even a weak rookie. Little do they know, this is an individual game, and they’ll be answering to no one but themselves in the most unpredictable Challenge ever.

On last week’s episode, the challenge was named Sausage Party and the challengers competed individually. The challenge wrapped every cast member in plastic wrap and they had to roll around an obstacle course and race each other. The obstacles included rolling over a hot grill, rolling through condiments and placing yourself on a bun. Laurel was the front runner for the girls, and Cara Maria was the only girl who was even close. Zach and Johnny R. were the front runners for the boys. Ultimately, Laurel and Johnny won.

On tonight’s episode the question of whether Laurel and Jordan’s relationship will last now that Jordan has left for Uruguay is answered. Meanwhile, Bananas thinks that Jordan’s intentions with Laurel were not real.

Tonight’s episode of The Challenge: Free Agents kicks off with Johnny Bananas dressed as a banana, at the funeral for Devyn’s wig.

Later that night Preston and Leroy have a heart to heart about how stressful the game is. Leroy thinks Preston is just in it for the ride. Meanwhile Cohutta and Nany are making out in the corner, Nany tells him that they can’t be together because she doesn’t want to hurt him. Then Nany proceeds to go home and hook up with Johnny.

The next day Cohutta is completely unaware of Nany and Johnny sleeping with each other. Nany confesses to him that she “did something stupid last night.”

A clue arrives, it says “You need to stretch your mind to be able to win tomorrow’s challenge. Be ready bright and early.”

The next day the free agents head down to the beach and see two cages full of ropes tied in knots. Zach thinks it looks like, “on big sadistic sex swing.”

TJ arrives and announces they will divide into two teams of seven. Each player has their own color, and must find their color rope in the cage and hang from it for one minute. The girls captain will be Devon and the boys’ captain will be Johnny. They begin picking their teammates one at a time.

The teams begin deciding which player will be which color, and then get to work suspending each other in the air from the assigned colors. So far Team Johnny has one person in position, and Team Devyn is struggling.

Team Devyn gets their entire team strapped in and the timer starts. Meanwhile Team Johnny doesn’t even have half of their teammates strapped in to the ropes yet. Team Devyn wins the challenge on their first attempt.

TJ arrives,and it is time for Devyn to reveal her nominations from the losing team, and she votes for Aneesa, her entire team follows suit and votes for Aneesa. The unanimously decide to vote in Preston as well.

Afterwards Nany breaks down in tears and confesses to Cohutta that she hooked up with Johnny the night before. He comforts her and encourages her to stop pushing people that actually care about her away.

Tonight they are playing Oppenheimer for elimination. They have to start back to back and run around the cage in a circle and then push through each other to see who rings the bell first.

Aneesa and Laurel are up next in the Oppenheimer. Laurel wins the first round and is currently ahead 1-0. Aneesa gives it her all the second round, but Laurel still wins. Aneesa is officially eliminated from The Challenge.