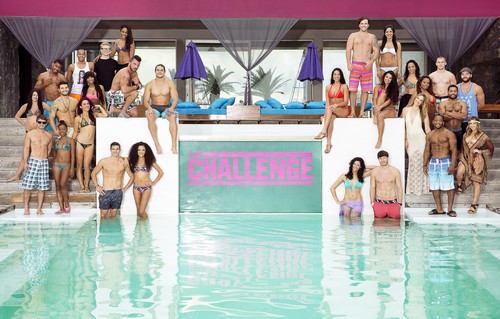 For those of you who are new to the show, The Challenge: Free Agents is about Twenty-eight money-hungry competitors who arrive in Punta del Este, Uruguay, expecting to be teamed up with an ex, an enemy, or even a weak rookie. Little do they know, this is an individual game, and they’ll be answering to no one but themselves in the most unpredictable Challenge ever.

On last week’s episode, the question of whether Laurel and Jordan’s relationship would last now that Jordan had left for Uruguay was answered. Meanwhile, Bananas thought that Jordan’s intentions with Laurel were not real.  Did you watch last week’s episode?  If you missed it we have a full and detailed recap, right here for you.

On tonight’s episode a competitor gets an unexpected injury, could this be the end for them? Also a long lasting friendship takes a turn for the worst and is put to the test, in the end though the friendship doesn’t last and it tears the contestants apart.

Tonight’s episode of The Challenge kicks off with a new clue from TJ advising them they will have to “dig deep” during the challenge tomorrow.  Everyone heads to bed and Jessica and Laurel have a slumber party, and stay up all night writing love letters.

The next day the players head to their challenge and learn they will be breaking up in to teams of two.  There is a maze dug out in the ground, and each player must run through the maze to move their team’s balls from one stand to the other, the problem is they are going to be colliding with other players in the maze.  There will be a guys’ round and a girls’ round.

The girls go first and begin moving their balls through the maze.  Devon is annoyed with how slow her partner Laurel is moving, but Laurel isn’t trying to collide with anyone.  Theresa and Nanny take the win. Cara Maria is frustrated, she blames her partner Jessica for their loss.

Now it’s time for the guys’ round.  Johnny and Leroy are off to a bumpy start when Johnny stumbles and knocks down all of his balls, Leroy is fuming because he is doing all of the work and they are in last place.  CT and Zach win the guys’ round.

Theresa, Nany, CT, and Zach are safe.  They ride back to the house together and discuss who they think they should put up for elimination.  Nany is concerned when she hears the guys discussing putting up Cohutta.  She gives him a heads up when she gets back to the house, and Cohutta tells her to “do something about it.”

The players head out to the bar that night, and Theresa talks to Leroy about possibly going up for elimination.  She can’t believe how unfazed he is by it, and was hoping he would cut some sort of deal with her.

The next day TJ arrives and it is time for them to put up their eliminations.  They nominate Jessica and Cohutta.   The rest of the losing squads will be entered in to the draw.

Afterwards Jessica confides in Laurel that she feels calm about the elimination match.  Nany is stressed about Cohutta possibly being eliminated.

Later that night the players head down to the elimination round and the losers draw to see who will be competing against Cohutta and Jessica.  Leroy and Cara Marie pull the elimination cards.  Tonight’s elimination match will feature five rounds.  The players will either play offense of defense, the person on offense must try to score by putting the ball in the barrel, and defense must make sure they don’t score.

The girls play first, and Jessica and Cara Maria end up in a no-holds-bar brawl and the score is still tied 0-0.  The other players are shocked to see how hard Jessica is playing, they didn’t think she had it in her to shut down Cara Maria.  After a long dirty fight Cara Maria finally wins 2-0.  Jessica is officially eliminated from The Challenge.  After the match Cara realizes that there is something seriously wrong with her hand, it’s aching and throbbing, and she goes to see a medic.

Now it’s time for the guys’ round.  Cohutta and Leroy face off, it looks like David trying to take on Goliath.  Leroy quickly takes the lead 2-0.  After just three rounds Cohutta loses 3-0.  Cohutta is officially eliminated from The Challenge.

Cara Maria gets some devastating news from the medic and he advises her to get an x-ray because he thinks her hand is broken.  She begins crying because she knows if it is broken she will have to leave the competition.