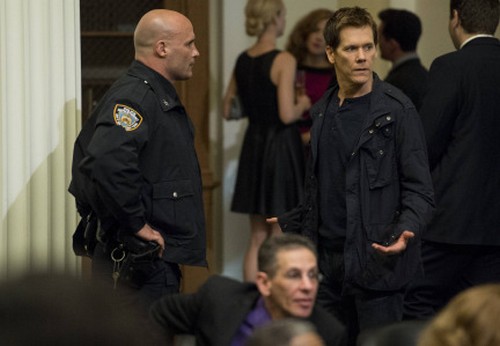 Tonight on FOX their hit psychological thriller THE FOLLOWING airs with a new episode called, “For Joe.”  On tonight’s episode Warner puts Crawford and David up in a hotel where the two are mistaken for a gay couple.  Did you watch last week’s premiere episode?  We did and we recapped it right here for you.

On last week’s premiere episode one year after Ryan Hardy’s pursuit of serial killer Joe Carroll, a healthy and healed Ryan was living in New York City. On the surface, it appeared Ryan’s gotten his life back together. But deep down, his obsession with Joe continued to grow. Then, on the anniversary of Joe’s death, a new murderous rampage left everyone shocked and determined to discover the truth.

On tonight’s episode when Camila goes out of town to visit her sister, she leaves Warner with his first family-free weekend in years – except for the fact that Crawford now lives with them. To solve the problem, Warner puts Crawford and David up in a hotel where the two are mistaken for a gay couple on their honeymoon.

We will be live blogging The Following Premiere with all the up-to-the-minute details at 9PM EST so make sure to come back to this spot and watch the show with us.   Make sure to refresh often so you get the most current info!  While you wait for the episode you can catch a sneak peek of tonight’s episode BELOW!

The real Joe Carroll is alive and well by pretending to be nothing more than a country hick named Darryl. He’s moved in with a mother and daughter. The daughter has no idea who he is while on the other hand the mother appears to know exactly who he is and wants to protect him. She doesn’t want anyone to coming looking for him but she feels he’ll go looking for trouble. He stayed up all night watching what happened with the murders back in New York.

While in New York, Carlos is waiting for word from Joe. Unbeknownst to him, he might only be alive to take the call. The freaky twins and the French madam named Giselle appear to only be keeping him alive until he appears no longer useful. As for the twins – they have much grander plans waiting for them. They forced their way into a respectable house just and save a special surprise for the family’s young boy. What do they plan to do with him?

The FBI are trying to figure out the twins’ game plan. As of yet they still don’t know who they are but they do know they’re planning something. Right about now they could really use Ryan’s help. Sadly for them Ryan hasn’t fully allowed himself back onto the case despite what he already knows. He’s still investigating on his own.

Ryan went over to Lily Gray’s. She’s the only survivor from the string of new attacks and Ryan wants to know why. Is it possible she met Joe before? She denies ever meeting him but she is curious why Ryan is asking all of his questions. She knows he isn’t part of the investigation and figured his curiosity got the better of him. Luckily she didn’t get offended by all of his questions.

Joe is playing his part well. He’s supposed to be the brother of Judy. She happens to be a well-known prostitute with personal ties to the reverend. His cover story is that he just returned from deployment overseas.  But it’s hard not to give into his urges when he notices the good old reverend eyeing up Judy’s teenage daughter.

The daughter, Mandy, however might know more than she’d letting on. She’s helping Joe get messages from his “friends” and she’s pretty much figured out that same group of friends are the one killing people in New York. And yet Mandy doesn’t care that Darryl/Joe isn’t a good man. She liked having him around the house. Especially when her mother leaves her to go meet a client.

The twins, Mark and Luke, killed the parents of the house they had broken into. And then like with their first victim, the brothers pretended their victims were alive. They even reenacted a family with the two corpses playing their mom and dad. Once they were done though they called Ryan. They knew he would trace the call and coming looking. It’s ok! That’s what they wanted him to do.

The brother waited until arrived alone and then they showed him they were across the street in an occupied house. Ryan told his niece who was listening in to finally call for back up but it was too late for the parents. The twins only let the little boy live.

The FBI wants to know why the killers contacted Ryan. They know he’s holding something back from them. At this point, Agent Phillips feels Ryan may actually be hindering their case by keeping secrets but he was told to back down. Ryan is the only one getting the killers to talk. Just as Ryan was leaving behind the scene and Mike’s concern, he got another call. Luke wanted him to know they picked up on his interest to Lily.  He practically dares Ryan to arrive in time or else something bad is going to happen to her.

Joe and Mandy were enjoying a night in watching tv when the Reverend returned. He wanted to know where Judy was and was prepared to wait for her return. Unfortunately he began watching the special the other two were enjoying prior to his arrival.  He saw Joe’s photo on the news and quickly tried to make his excuses. Joe stopped him from leaving and Mandy knocked him out. She asked Joe not to kill him and Joe is truly considering her suggestion.

Ryan arrived at the party Lily was attending without back up. Yet he soon caught on to agents also being at the scene. He warned the agents to be on guard with Lily while he track down the only killer he managed to get a visual on. He didn’t know the two of the killers would be at the party. So he was only looking for one face and it was surprised to realize he going up against twins. He had saved Lily but he couldn’t help her friend. He was attacking one of the brothers when the other showed his face. They used his shock to overpower him and make it run for it. Although Ryan did get a round off and shot Luke.

Mike may be finally done with Ryan. He was angry that Ryan didn’t call the police. He feels like the other man took too many risks with other people’s lives. Ryan tried to make it better by telling him about the twins but Mike doesn’t want to hear it. He told Ryan to pass on the information to Mendez. He was just done.

Lily thanks Ryan for saving her life. He was telling her how he messed up and she didn’t feel that way. Because of him both she and her friend are alive. David was rushed to the hospital and might make a recovery.

Joe wanted to be a different man. To start over so he could forget all of his past mistakes. And then the reverend showed up. Joe did kill him. He ended up taking a lot of enjoyment from it. The only downside was that he and Mandy knew Judy was going to be mad.

Emma used the following’s old form of communication to track down Carlos. Nevertheless, she never counted on Carlos dropping a bomb on her. Giselle made him hung up before they could speak more but she knows something new now. He let it slip that Joe was alive.