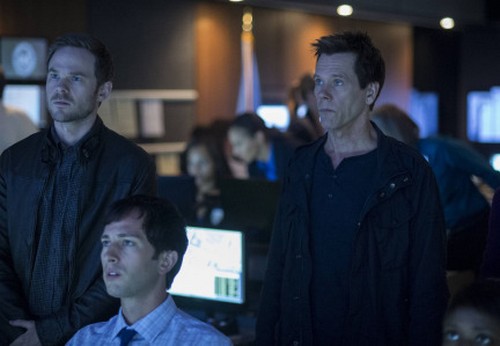 Tonight on FOX their hit psychological thriller THE FOLLOWING airs with a new episode called, “Trust Me.”  On tonight’s episode a shocking event leads Joe to put a new plan in action.  Did you watch last week’s premiere episode?  We did and we recapped it right here for you.

On last week’s episode when Camila went out of town to visit her sister, she left Warner with his first family-free weekend in years – except for the fact that Crawford now lived with them. To solve the problem, Warner put Crawford and David up in a hotel where the two were mistaken for a gay couple on their honeymoon.

On tonight’s episode Ryan continues his search to find the correlation between the recent tragedies in New York City and Emma and the existing members of the Havenport cult, while the FBI becomes increasingly aware of his undercover agenda. Meanwhile, a shocking event leads Joe to put a new plan in action.

We will be live blogging The Following Episode 3with all the up-to-the-minute details at 9PM EST so make sure to come back to this spot and watch the show with us.   Make sure to refresh often so you get the most current info!  While you wait for the episode you can catch a sneak peek of tonight’s episode BELOW!

Tonight’s episode of the Following continues with Ryan’s blatant and somewhat desperate attempts to be a vigilante. He only admitted to finding and losing Carlos after the feds had found his fingerprints all over Carlos’s apartment. He was called into headquarters by Mendez to answer for that. But he still sat on information. He rather risk the lives of everyone including the twins’ latest victim and his crush, Lily, than to officially help the FBI.

Ryan has it in his head that he must do it alone. Even after he hears the agents say they got a search warrant. He probably knows that they’ll search through his belongings but he doesn’t seem to care. Although Mike refused to wait for a warrant. His former friend invited himself in to see what Ryan was working on.

Meanwhile one of the twins has a crush. They’ve been reading up on Joe’s cult and Mark wants to know a little bit more about Emma. She’s been calling Carlos nonstop to hear about his plans and whether or not Joe is alive. She doesn’t want to believe Joe wouldn’t turn to her but only Carlos can give her a definite answer. So Mark told Carlos to answer the phone. He made Carlos arrange a meeting with Emma. One where she comes alone to a secret location.

Mike wanted to believe that Ryan had gotten his life back on track. Then he saw the wall. The wall Ryan dedicated to following all of Joe’s cult members.  He needs answers from him or he’s going to think Ryan went off the deep end. All Ryan could say is that Joe might still be alive. The body they found could very well be Joe’s half-brother. They had shared the same height and build. As for the DNA testing, the record they had of Joe on final could have been tampered with. The facility that was holding it got broken into.

Either Mike can’t believe it or he’s refusing to. He wants to work with substantial evidence – not theories! When Mike returned to his office later he learned along with the rest of the task force that Emma came back on the scene. They spotted her entering a house in Jersey and if they move their swat team fast enough they might be able to catch her.

Emma came out hiding to meet Carlos and instead Mark showed up to the meeting. He wanted to meet her so badly that he was willing to answer all of her question. Mark told her about Joe. All they have about him is what Carlos told them. They believe Joe is alive and that’s why they began massacring people hoping to draw their favorite serial killer out. Everyone knows he’s a narcissist and that’s why he’ll be driven to come out of hiding. Joe is going to want to return to his adoring fans.

And they were right. Even before Joe killed the Reverend he was getting itchy to return to the limelight. He only shacked up with Judy because he needed to lie low. Judy on the other hand didn’t get that. She started to write him letter back when he was in prison. She told him she wanted to be the one that helped changed him. As if she could. Once Judy realized that she couldn’t stop Joe from returning to his old life then she decided to kill. Too bad for her he removed the bullets from her gun.

Joe was close to killing her when Mandy intervened. He and Mandy have grown close. She had begun to look up to him as a surrogate father. It was because he has real affection for Mandy that he didn’t kill Judy. Otherwise nothing would have stopped him from enjoying another kill.

The house the feds located was actually the safe house. Emma was with Mark when her remaining friends were killed in the raid. Mark wanted to introduce her to the rest of his friends and his brother. She went along with him though to meet Carlos. She learned about the raid after she was already safe with Mark.

Luke and Giselle weren’t really sure about her. They could have killed her but they went with killing Carlos instead. All they needed is one person to answer the call from Joe and Carlos had annoyed everyone by this point. Anyways Joe trusted Emma more. She was one of his top lieutenants.

Ryan was told to step away from the case and from Lily Gray. He didn’t which was lucky for the task force. Ryan made Mike show him the security cameras from the train killings. When he went over them again he noticed that Lily purposely took the local when she claimed she was in rush that day. Why would she do that? Unless her entire story was a ruse.

Unfortunately, they both realized he was on to her at the same time. Ryan had figured out she was an accomplice, but he wasn’t fast enough to catch her. He had hesitated and that lead to him warning Mike too late. By time they were on the move she made sure she got lost in the crowd. No one noticed when she got a ride from Luke. His face was plastered all over the news and still no one saw him pick up his mother.

Mendez and Ryan are kicking themselves for not seeing Lily for what she was. She got by both of their defenses. Mendez thinks Ryan should come back to help. Maybe if they were working together then they would have seen it but he’s not coming back. All of what happen reinforced Ryan’s fear. He thinks it’s his fault whenever someone else dies.

Joe is heading back to civilization. He was going to kill Judy no matter what and Mandy truly does love him. That’s why she saved him the trouble by killing her own mother. She did love her but not as much as she loved Joe. She’d rather go on a grand adventure with him than stay in backwards small town as the child of a prostitute.

Mandy prove to be reliable. She helped Joe torch her old home with the bodies of the Reverend and her mother inside. She’s hoping they get to go to New York. Mandy has never been anywhere and she’s always wanted to see the city.