BY Kristine Francis on March 31, 2014 | Comments: one comment
Related : Recap, Television, The Following 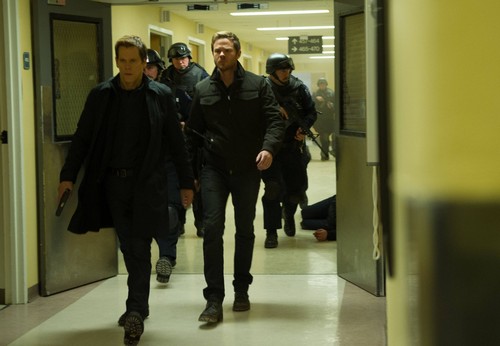 Tonight on FOX their hit psychological thriller, THE FOLLOWING returns with a brand new episode.  In “Freedom, ” a massacre leads Ryan and Mike into dangerous territory; and information about a potential new leader is revealed. Elsewhere, Joe continues training the Korban cult and confirms plans with Emma.

On the last episode Ryan Hardy was going to come one step closer to Joe Carroll.  As his power over the Korban cult grew, Joe was going to set a deadly plan in action, using new acolytes to carry out his demands. Meanwhile, Ryan and Max will devised a plan to contact Joe, in hopes of tracking down his whereabouts, and Weston was going to meet with a face from the past. Guest stars featured: Shane McRae as Robert; Sprague Grayden as Carrie Cooke;Emily Kinney.  Did you watch last week’s episode? If not then check out our detailed recap of it right over here.

On tonight’s episode A deadly massacre, thought to be sparked by Joe Carroll, leads Ryan and Mike into very dangerous territory. But as more details are revealed, they realize another leader might be on the rise. Meanwhile, Joe continues to train the Korban cult and confirms his new plans with Emma and those who doubt him.

Tonight’s episode of The Following opens with Joe at Korban preaching to some members of his new cult. A woman volunteers to “be first.” Joe pulls her up in front of the group and tells her to close her eyes and describe the “happiest moment of her life.” She describes snorkeling in Florida with her fiancé. Angela, the woman opens her eyes, and Carla is tied to a table in front of her. Joe gives her a knife and tells her to “kill Carla” and give her the gift of happiness like she described. She kills Carla, and cries tears of joy. Joe Carroll is proud of her.

Ryan is watching the news while Carrie is getting dressed for work. She mentions to him that someone just posted a story online that Lily Gray was sighted in Europe. Ryan laughs and shrugs it off. Carrie leaves for work, and Mike passes her in the doorway. Mike and Max were up all night and has narrowed down their search to 77 cults that Joe Carroll may have taken control of.

FBI agents check in on Claire. She wants to see Ryan, she thinks she can help him bring down Joe so that she and her son will be safe again.

Two men in white masks walk into a café with a knife, and begin slaughtering all of the customers and staff. Ryan and his team arrive at the scene of the crime. Ryan is confused because there wasn’t a message left, Joe’s men usually leave a message.

Robert, one of the members of Korban pay Joe a visit. He is upset that Joe killed Carla, she was his friend. And, according to Robert a lot of the others are missing Micah, he was supposed to choose who “went home.” Joe lectures Robert and tells him that they are on a special mission to “save the world.” Robert apologizes to joe, and says he is sorry he brought it up, he excuses himself.

Joe sends Emma to talk to Robert, she winds up sleeping with him in his bunk.

Ryan is still investigating the bakery. He realizes there were way more employees taken into the hospital wounded than there were on the bakery’s schedule. Ryan puts two and two together and realizes that it wasn’t Joe’s hit, it was Lily Gray’s.

Meanwhile the two men that stabbed everyone at the bakery are in the hospital being treated for minor wounds, most likely self-inflicted. A woman named Serena posed as a doctor and smuggled guns into the hospital. She passes them off to Lily’s workers. They head to the security wing of the hospital and break out Lily Gray’s son Lukas.

Ryan, Mike and the rest of the police show up at the hospital, and secure it. They know Lucas and Lily’s men are still somewhere in the hospital. Ryan heads into the basement, meanwhile Serena pulls a knife on Mike. Before he can get any information from her about Lily Gray’s whereabouts, one of the other cops shoot her and kill her.

Emma heads back to Joe’s room and warns him that Robert is right, these people are looking at him for guidance and he needs a plan.

Ryan is searching the hospital’s underground tunnels for Luke and Lily Gray’s men. Unfortunately there were two of them. They have him on his knees, and have confiscated his weapon. Ryan fights back and shoots the men. Luke escapes while Ryan is struggling. He follows the tunnel and emerges in a market and gets away. He arrives at Lily and his brother’s motel room and is reunited with them.

Ryan sits in the car with Mike, and Mike confesses that he is scared of how cold and calculating Lily Gray is, and how many resources she has. Ryan reassures him that they are going to find Joe Carroll and Lily Gray.

The FBI arrives at Ryan’s house, with Claire in tow. He is shocked to see her. Mike stutters and says he can “explain this.”