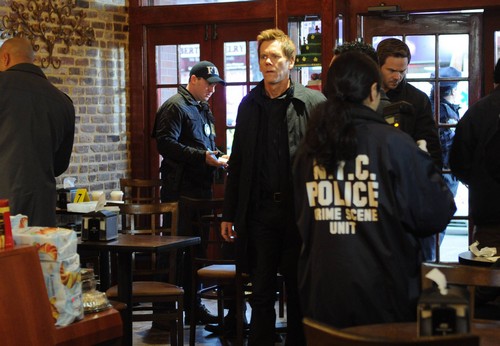 Tonight on FOX their hit psychological thriller, THE FOLLOWING returns with a brand new episode.  In “Teacher’s Pet” Joe attains more power over the Korban cult while Ryan and Max try to track him down. Meanwhile, Weston reunites with someone from his past.

On the last episode omplications arose as Ryan, Max and Weston got closer to discovering the mole in the FBI. Elsewhere, Joe and Micah had to deliver a message to Ryan, but their plan threatened the Korban cult.  Did you watch last week’s episode? If not then check out our detailed recap of it right over here.

On tonight’s episode Ryan Hardy is going to come one step closer to Joe Carroll.  As his power over the Korban cult grows, Joe is going to set a deadly plan in action, using new acolytes to carry out his demands. Meanwhile, Ryan and Max will devise a plan to contact Joe, in hopes of tracking down his whereabouts, and Weston is going to meet with a face from the past. Guest stars will feature: Shane McRae as Robert; Sprague Grayden as Carrie Cooke;Emily Kinney.

On tonight’s episode of “The Following”, Mike is going to be in so much trouble with Ryan. He knew from the start that Claire was still alive. As matter of fact he helped arranged her “death” and talked her into going through with the witness protection program. Claire hadn’t wanted to until he spoke to her. And she only relented because she had thought he was a trustworthy friend although to whom right about now is the better question.

Mike was the one that was with Ryan all throughout his grieving. He even tried to help get Ryan clean afterwards, but never once did he say something about Claire even though he knew how much it would have meant to Ryan.

At this exact moment he’s still keeping the secret while currently being in direct contact with Claire again. The feds want to move her and Joe as an added precaution. No one can take the risk of Joe coming to find them, but Claire is tired of running. She feels like it’ll never end unless they finally put down Joe once and for all. So naturally they brought back Mike to drill some common sense into her.

Now isn’t the time for her to go rogue and Mike tells her so.

Ryan on the other hand lives to take the risks. His one night with Carrie wasn’t enough and now he wants to use her expertise. Ryan gets Carrie to report breaking news – she has to tell the world about Dr. Strauss’s capture. Ryan was hoping the media coverage would reach Joe and provoke him into taking action.

When Joe saw the news, he instantly thought about Joanna. Joanna was his man on the inside and he doesn’t know that her cover was made or that she’s dead. So when he called her; a very pleased Ryan answered the phone.

The moment Emma realized Ryan was on the other end she tried to get Joe to hang up, but Joe always loved showing off. Even Strauss thought so. He called it Joe’s biggest flaw – he said his pupil craved attention. Though that’s all the information Strauss was willing to give Ryan. Just because he was disappointed with Joe doesn’t mean he was going to betray him.

Ryan played on their connection. During his conversation with Joe, Ryan talked about Strauss helping him and his disappointment with his protégé; he knew it would get Joe to lose control. And he was right! Joe has only a few weak spots and his surrogate father happens to be one of them. He later snapped at Emma to give him a minute when he’s never done that. Joe rarely loses his temper with his followers.

Joe knows that the best way to win people to his side is to play on their emotions. He becomes their friend, their lover, or father. Basically whatever they feel they lack is what he becomes. And in doing so he wins their devotion.

That’s why he never gets upset. If they were to see him lose control then it messes with the illusion and that’s what happened with Mandy. She was there when he was on the phone with Ryan and that made her doubt him. She was growing uncomfortable with his “lessons” and when a few naysayers asked to be dismissed, for breathing room, she went with them. The rest of the group that walked out on Joe were all put in Micah’s old hole. While Mandy got off scots-free. Joe had decided to give her another chance though Emma’s didn’t understand why.

So far Emma and Mandy haven’t gotten along. Emma feels that Mandy encroaches on her time with Joe and so she doesn’t “this kid’s” potential. At least she didn’t up until Mandy revealed Emma wasn’t the only one around here that killed her own mother.

Ryan, Max, and the returned Mike were hunting for any signs of Joe or his new followers when a new killing spree cropped up. Joe has sent out a few to go on missions. And for a while his people were able pull of some successful kills, but there was a newbie with them.

Mallory had never killed or harbor such dark thought like the rest of them have. And this explains why she botched her first kill. When she attempted to kill one woman in the restroom she by some means let her victim get away. The woman escaped her and was calling for help when Mallory’s partner swooped in to clean up after her. He got to the victim, but was then forced to use her as leverage because Ryan had also arrived at the scene.

Ryan couldn’t get the partner to drop the knife although he knew he could get to Mallory. He saw how she didn’t want to do this and was trying to get her to tell him about Joe. Sadly, her partner killed her before she could.

Both Mallory and her partner died leaving Ryan back at square one! He was again waiting on Joe to make the next move when Carrie came by his place to cheer him up. Regardless of the way this relationship began its starting to become something Ryan can rely on, but how is he going to feel when Claire returns.

Claire is temporarily leaving witness protection. She said she’s not leaving the city till everything is finished with Joe and the first thing she can think of doing is to contact Ryan! It’s about a year too late, sweatheart!