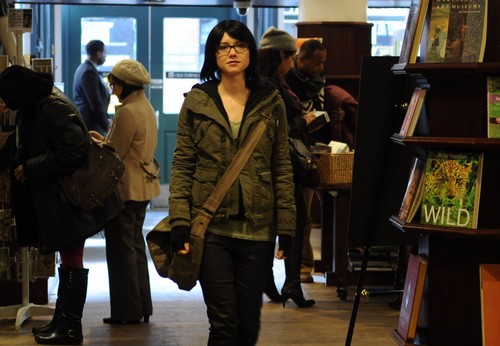 Tonight on FOX their hit psychological thriller, THE FOLLOWING returns with a brand new episode.  In “Unmasked” complications arise as Ryan, Max and Weston get closer to discovering the mole in the FBI. Elsewhere, Joe and Micah must deliver a message to Ryan, but their plan threatens the Korban cult.

On the last episode, after a tragic turn of events, Ryan attempted to find the man who originally taught Joe to kill, in hopes of finding new answers. Meanwhile, at the compound, Joe tried to get his bearings, while Emma and Mandy waited for him to reveal his new plan.  Did you watch last week’s episode? If not then check out our detailed recap of it right over here.

On tonight’s episode there is also still the issue of Julia. Joe and Micah may have eliminated those who doubted with that stunt in “The Messenger,” but there is still the matter of Julia. Do you think that she will be a problem in this next episode?

Tune in at 9PM on FOX for another exciting episode of THE FOLLOWING! We’ll be live blogging it right here for you so check back in with us. In the meantime, hit up the comments and tell us your thoughts on the second season of the show!

Tonight’s episode of The Following opens with Carrie Cooke discussing Joe Carroll’s murder spree and Lily Gray on the news.

Joe calls Jenna and tells her he “might be needing her help again.”

Ryan meets with Carrie after her news appearance, he reveals that he still hasn’t located Joe Carroll. Carrie invites him to have dinner with her later, he declines.

Joe is busy trying to help Micah film a video about his mission, while wearing a corny Halloween mask. Emma and Robert arrive at the cabin, Joe has enlisted them to be Micah’s first messengers. Micah reveals that he is sending Lance with them to New York, and Joe is not pleased of the change of plans. Micah heads outside to get the weapons, and Joe questions whether or not Emma is really ready for the mission.

Ryan is investigating the FBI leak, and he thinks it may be an agent named Debra Parker, via Gina. Ryan pays Gina a visit and asks her why she accessed Debra Parker’s email six times last year. Gina declares she is not the leak, and tells him he needs to “tread lightly.” After Ryan leaves her standing in the street she begins to act paranoid and ditches her cell phone, locks her car, and hops in a taxi. Ryan and Mike tail her.

Robert and Emma head out on their mission. Emma kisses Joe good-bye and says “go big or go home.” Before they leave Micah introduces them to Lance. Joe slips Emma a video of Micah’s message, Emma climbs into the car with Robert.

Gina’s taxi drops her off at her house in the suburbs, but she has soccer moms over with their kids. Gina tells her girlfriend Janna that she needs to talk to her alone.

Joe heads back into the cabin, and Micah is on the floor praying about Julia. Micah asks Joe for advice, and Joe reminds him that he killed his own wife so he probably doesn’t offer the best advice.

Janna meets Gina in the garage to talk, and asks her about her psychotic break after the baby was born. Janna claims it was post-partum depression. Gina has an epiphany reveals that Janna is crazy and she has been using her security clearance to access information on Joe Carroll. Janna is clearly crazy, snaps, stabs Gina and leaves her lying on the garage floor and steals her gun.

Ryan and Mike arrive at the house in the suburbs where Gina was dropped off. Janna tells her friends in the kitchen she has to run upstairs for a moment,, and asks them to watch the baby for a moment. While Janna is upstairs Mike and Ryan ring the doorbell and one of Janna’s friends let them in. She shows them to the garage and they realize Gina has stabbed. They get the kids out of the house just as Janna runs downstairs with a gun. Mike and Ryan pull their guns on her, she admits she knows where Joe Carroll is, and then shoots herself in the head.

Micah’s goons bring him Julia out of the cabin he had her locked in. Julia wants to know why he has turned everyone against her. Micah reveals that his “faith has evolved, he is evolving, and she should too.” Julia says she is his wife and she will believe in him and change for him. She pulls his gun off the coffee table and tries to shoot him, but there aren’t any bullets in it. He was testing her, and she failed. Joe Carroll comes in and kills Julia for Micah. Micah thanks him afterwards.

Police and ambulance arrive at Gina and Janna’s house. Mike clears her computers before the police takes them, sends all of the files to Max, and steals her cell phone so the police don’t confiscate it in hopes of finding information about Joe Carroll’s whereabouts.

Emma, Robert, and Lance arrive at their mission, which turns out to be Carrie Cooke’s book-signing.

Max, Mike, and Ryan crack the codes on Janna’s phone and realize that she is obsessed with Carrie Cooke. They think that Cooke may be Joe’s target.

Meanwhile at the book signing Emma, Robert, and Lance have begun slashing all of Carrie’s fans throats. After murdering a dozen people they give Carrie the video of Micah’s message and tell her that if she doesn’t share it with the world they will come back and kill her too.

The police arrive and Emma and Robert escape, they leave Lance behind and he gets shot and killed after trying to take an officer hostage. Emma and Robert report back to Joe and Micah and let them know they completed their mission.

Carrie appears live on the news and says she has a video to share, Micah’s mission comes on the live broadcast. But, it isn’t Micah, Joe switched his tape with Micah’s. In the video Joe declares “no one is safe,” and this is the “age of Joe Carroll.” Meanwhile Micah drops dead while watching the broadcast, he appears to have been poisoned by Joe.

Ryan seen the news, and he is not happy. He can’t believe that Carrie didn’t tell him about the video. Max points out that Joe probably threatened Carrie, and that is why she didn’t tell him before she played it.

Joe explains to Robert that “Micah has gone home,” and comforts him by telling him that Micah “has received life’s greatest reward.” He tells Robert to go outside and tell everyone the “glorious news.” Joe sends Emma out to follow Robert and makes sure he does what he was told to do.

Mike climbs into the back of aun unmarked SUV in a parking garage, and the driver takes off.

Robert holds a funeral for Julia and Micah and declares “all hail the prophet Joe.” The group begins chanting “Praise Joe.”

Carrie arrives at Ryan’s apartment, to discuss the video she aired on the news.

Two guards escort Mike to a room where Claire is waiting for him.