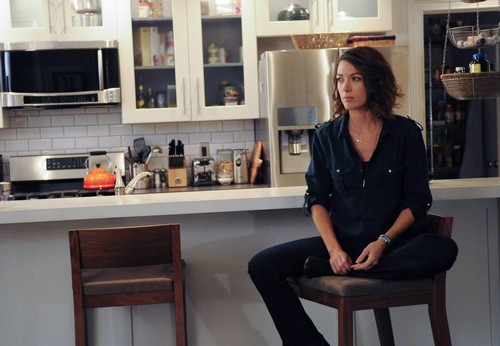 Tonight on FOX their hit psychological thriller, THE FOLLOWING returns with a brand new episode.  In “The Reaping,” Ryan hopes to kidnap Joe from the Korban compound. Elsewhere, Carrie is asked to deliver a message to Joe; and Weston makes a life-changing decision.

On last week’s episode after a series of public condemnations of Joe and his followers, Joe targeted the son of a man who stood against him. Meanwhile, Ryan was faced with the shocking news of Claire’s reappearance and Mandy made a decision that led her to a familiar face which could undo all that Joe had been working for.  Did you watch last week’s episode?  We did and we recapped it right here for you.

On tonight’s episode Ryan tracks down the location of the Korban compound with hopes to infiltrate the cult and capture Joe Carroll, but all doesn’t go exactly as planned. Meanwhile, Claire asks Carrie to deliver a message to Joe, and Weston makes a decision that will change the course of his life forever.

Tonight’s episode of The Following picks up where we left off last week, Ryan has followed Joe Carroll’s men back to the compound and they have the preacher’s son Preston hostage. Jo kills one of Joe’s guards and begins making his way onto the property.

Claire is prepositioning Carrie. She wants to go on TV live and draw Joe Carroll out of hiding. She knows that Joe will be shocked to see that she is actually alive. Carrie is hesitant but she agrees to talk to her producer. Mike shows Carrie out of the apartment and Carrie confides to him that she has no intention of putting her on the air, she says Clare isn’t thinking clearly. After Carrie leaves Mike receives a phone call, apparently Joe contacted Tanner’s dad Kingston. Mike rushes to the preacher’s house, the cop on the scene says they are running forensics on the flashdrive he received with the video on it. The pastor says he wants to respond to Joe right away, but the police advise him against it.

Mike is still creeping around Carroll’s compound. He watches from the shadows as all of Joe’s followers gather outside for the ceremony. Emma reassures Tilda that after the ceremony a large group will be leaving for their final mission. Joe takes the stage and all of his followers begin cheering. Joe has one of his followers named Courtney and Preston on their knees in front of him with their hands tied behind their backs. Joe says Preston is going to show them that his “father’s words are a web of lies and far from Godly.” Ryan watches from the crowd he has put on a white mask so no one realizes there is an intruder among them. Joe tells Preston he is going to have to kill Courtney, and “there is no redemption without blood.” While Joe is preaching about sacrifice Ryan shoots at him. All of the followers begin rushing around, confused. No one knows who fired the shot. Joe isn’t injured, he takes cover.

Joe heads back into the lodge with guards. Joe is confused he thought they had eliminated all of the followers that doubted him. Luke reveals that it might not be a follower, it might be Ryan Hardy-he could have followed them. Joe tells them search the entire compound, if Ryan is there he wants them to find him. Emma is distraught, she wants Joe to reconsider, she thinks they should leave ASAP. If Ryan has found them then the FBI will be right behind him.

Max confronts Mike and wants to know why he isn’t grieving his Dad properly. She thinks he is on a revenge mission to kill Lily Gray. They receive a phone call, law enforcement has located Lily Gray. They rush out of the apartment.

Meanwhile Ryan is running through the woods, Joe’s men are following him. He tackles one of them and asks them where Joe is sending the group for the next attack. The follower doesn’t know, only the chosen know. He overhears Joe on the radio, he tells his men to bring him in alive and not to kill him. Joe surrenders to them so that he can see Joe Carroll.

Mike, Max, and the police arrive at Lily’s house. She and the twins are long gone though. They do find Mandy’s body though. They track down one of Lily’s guards’ credit cards and trace his last rental car purchase.

Luke and Emma are arguing. Luke wants to know if the plan is even on anymore and why Joe didn’t just kill Ryan. Emma says that Joe loses his ability to think clearly around Ryan. Luke wants to know when they are supposed to leave for New York for their mission.

Joe is in another room with Ryan, he has him tied up and is questioning him. Ryan tries to get Joe to talk about his next attack and what he plans to do with Preston’s son Tanner. Joe tells Ryan he thinks he is “really going to enjoy his next trick.”

Kingston Tanner is giving a press conference despite being told not to by Mike and the other cops. He prays live on television and taunts Joe by stating he will not be victorious.

Joe brings Courtney and Preston into the room and has them kneel on their knees facing each other right in front of Ryan. Joe puts a knife to Preston’s throat and tells him either he kills Courtney or dies. Ryan tells Preston not to kill Courtney, he tells him that Joe won’t kill him because if he is dead he has no leverage. Preston takes the knife anyways and stabs Courtney and kills her.

Max and Mike realize that Lily isn’t trying to get away, she is trying to get to Joe. There is about to be a bloody war and Ryan is going to be right in the middle of it.

Joe as his guards take Preston back out of the room and tells them to “clean him up.” After everyone leaves the room Ryan promises Joe that he is going to kill him.

Lily, the twins, and a couple of her men arrive outside of the compound. She stays behind with the twins while her men go inside. She tells them to bring her Joe. Emma sees their cars on the security camera and begins panicking thinking that they FBI have arrived. Emma rushes in and tells Joe they have to go. She begs him to kill Ryan, but he refuses. He leaves him in the room tied up.

Lily’s men arrive at the compound and began mowing down all of the followers with machine guns. Ryan unties himself and rushes out of the building. He grabs a gun off the ground and shoots Lily’s men. The FBI arrive with Mike and Max. Ryan tells them that they just missed Joe. Mike disappears, and Max reveals that he ran off to find Lily.

Carrie goes on the air and reads a cryptic poem for Joe Carroll. Joe is watching and freaks out, he knows Clare must be alive.

Mike locates Lily outside of the compound. He holds her at gunpoint and asks where her sons are. She says Mark and Luke didn’t come with her. Ryan and Max come running and Ryan begs him not to shoot her, he tells him he is “better than this.” After a few intense minutes Mike says “I know this isn’t going to fix anything for me, but it will fix you,” and then he shoots Lily Gray to death.