BY Amanda Austin on April 7, 2014 | Comments: one comment
Related : Recap, Television, The Following 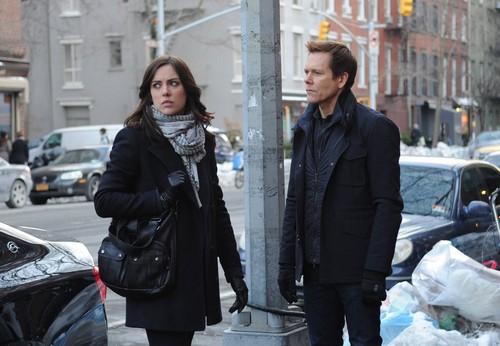 Tonight on FOX their hit psychological thriller, THE FOLLOWING returns with a brand new episode.  In “Betrayal,” Joe targets an enemy’s son after being publicly condemned. Elsewhere, Ryan hears news about Claire’s reappearance; and Mandy makes a decision that could undo all of Joe’s work.

On last week’s episode a deadly massacre, thought to be sparked by Joe Carroll, led Ryan and Mike into very dangerous territory. But as more details were revealed, they realized another leader might be on the rise. Meanwhile, Joe continued to train the Korban cult and confirmed his new plans with Emma and those who doubted him.  Did you watch last week’s episode? If not then check out our detailed recap of it right over here.

On tonight’s episode After a series of public condemnations of Joe and his followers, Joe targets the son of a man who stands against him. Meanwhile, Ryan is faced with the shocking news of Claire’s reappearance and Mandy makes a decision that leads her to a familiar face which could undo all that Joe has been working for.

Tonight’s episode of The Following picks up where we left off last week. Claire is standing on Ryan’s doorstep and he looks as if he has seen a ghost. The agents that escorted her leave the room so that she can apologize profusely to Ryan about faking her own death. She tells him that she is real, and rushes into his arms. She begs Ryan not to blame Mike, and explains that she lied to protect Joey. Claire cuts to the chase and tells Ryan she wants to kill Joe. Ryan tells her she needs to go back into hiding with Joey where she is safe.

Carrie Cooke is interviewing a Pastor, named Kingston Tanner, who has named Joe Carroll his personal mission statement, he has declared that Joe Carroll is the anti-christ and he has every intention of defeating evil. Joe watches the interview on the TV and rants to Emma about how much he hates religion and mentions that Tanner is his next target. Emma asks him if he has seen Mandy, and he says she is “probably around here somewhere.”

Meanwhile Mandy is meeting up with Mark. Mark wants to know where Joe is but Mandy says she can’t tell him. He says he understands and agrees to take Mandy to his mother and Luke.

Carrie Cooke is in a traffic jam, a group of people attack her driver with a tire iron and give her a flash-drive with a video message on it from Joe Carroll. He tells Carrie to air the message on the news or else he will kill her and her family. She gives a copy of the video to Ryan and asks him if she can spend the night at his house, he makes an excuse since Claire is staying at his house. He takes the video home and shows it to Claire. In the video Joe quotes the Bible, and claims he didn’t come to “bring peace on Earth.” Ryan realizes that Joe is waging war against religion and God, and puts two and two together and thinks he may go after Kingston Tanner and his family. Claire wants to go with Ryan to check on Kingston’s son in Connecticut, but he doesn’t let her. He heads to Connecticut with Mike and tells Max to head up to the apartment and keep Claire busy. Claire is not happy he ditched her.

Joe’s henchmen have already arrived at Tanner’s son’s campus. They murder a campus security guard in the parking lot.

Emma discovers that Mandy escaped, she shows Joe the surveillance video footage of her jumping the fence and leaving the compound. Mandy is with Lily Gray, Lily guilt trips her for leaving her to go with Joe. Mandy apologizes profusely and promises she won’t betray Lily this time. She tells Lily that she can’t tell her where Joe Carroll is though, she isn’t going to betray him either. Lily punches Mandy in the face and shocks her.

At Ryan’s house Claire finds lipstick in the bathroom and realizes that he has been seeing someone. Max lets Claire in to Ryan’s secret office in the apartment and she sees all of his diagrams and maps pertaining to Joe.

Joe’s followers arrive at Pastor’s son’s frat house and let themselves in. His fraternity brothers tell them that Preston is upstairs in his room. Preston isn’t home, they hide in his room waiting for him.

Meanwhile Luke and Mark are forcing Mandy to play truth or dare with them. She is clearly scared, and they are clearly crazy. Luke begins asking Mandy where Joe is and she won’t tell them, so they begin burning her arm with a candle.

Joe’s followers have Preston Tanner, they are videotaping his reactions while they torture and kill his girlfriend. Ryan and Mike arrive at the frat house and let themselves in. They find blood downstairs so head upstairs to see if anyone is still in the house. They find a room full of college kids with masks glues to their faces, and nearly shoot them thinking that they are Joe’s men. Meanwhile Joe’s men rush out of the house with Preston and jump in the van and leave. Ryan jumps in his car and chases after them.

Joe calls Lily’s phone because he thinks that Mandy went to see her and is afraid that she will tell them where he is. Lily puts him on speaker phone and reveals that they have brutally beat Mandy. Lily tells Joe to come get Mandy or else she will kill her. Joe says “I love you mouse,” to Mandy and then hangs up the phone. He obviously isn’t coming to get her.

EMT’s and police arrive at the frat house. Mike calls Ryan and Ryan reveals he is still following the van. He’s gone rogue. He refuses to tell Mike where he is and insists he doesn’t want back-up.

Joe is still upset over Mandy. Emma reveals that Lukas was killed at the frat house, but they are on their way back with Preston. Joe snaps on Emma, he blames her for Mandy running away. Meanwhile Carrie Cooke is on the air, she plays Joe’s video.

Mike heads back to Ryan’s apartment and fills Claire and Max in on the frat house. Ryan ditched his phone so that they can’t trace it. Carrie Cooke barges in and wants to see Ryan, she is shocked to see Claire Matthews.

Joe’s followers arrive with Preston at the compound, Joe tells him it is time for him to pay for his father’s sins. Ryan hides behind a tree watching…