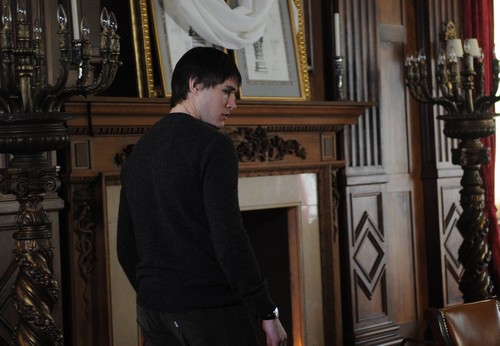 Tonight on FOX their hit psychological thriller, THE FOLLOWING returns with a brand new episode and the season 2 finale. In “Forgive” the second season ends with Ryan and Joe being forced to work together, despite their negative feelings toward each other, in order to save the woman they both love.

On last week’s episode Ryan and Mike tried to stop Joe from going forward with his plan, which threatened many lives. Meanwhile, Claire made a dangerous decision; and Mark and Luke tried to figure out what to do next.  Did you watch last week’s episode?  If you missed it we have a full and detailed recap, right here for you.

On tonight’s episode Mark and Luke (Sam Underwood) will turn the tables on both Ryan Hardy (Kevin Bacon) and Joe Carroll (James Purefoy), forcing the two sworn enemies to come together to save the woman they love.

Tune in at 9PM on FOX for another exciting episode of THE FOLLOWING! We’ll be blogging it right here for you so check back in with us. In the meantime, hit up the comments and tell us your thoughts on the second season of the show!

Tonight’s episode of The Following picks up where we left off last week, Joe has taken Mike hostage in the chapel. He wants Ryan to come out from hiding or else he is threatening to kill Mike, a shot is fired and Joe kills the preacher’s son he was holding hostage.

Mike calls Luke and he is holding Clare hostage. Luke tells Ryan to bring him Joe-alive. Or else he is going to “cut off Clare’s face and wear her for Halloween.”

Meanwhile Joe is having a meltdown and screaming at his minions to find Ryan in the church. The police outside are desperately looking for a way into the church, and the entire scene is being broadcasted live.

Ryan calls the police outside and tells them he has unlocked a back door of the church for them. On his signal they are supposed to kill the lights and enter the church. Ryan comes out of hiding and reveals himself to Joe. He knocks their camera onto the ground and cuts the live feed. Ryan tells Joe that the twins have Clare and if he doesn’t go with them they will kill Clare. He wants Joe to leave with him when they kill the lights.

The lights go out and Ryan and Mike leave with Joe. They put a towel over his face and rush him into a car. The lights come on and the FBI has killed all of Joe’s followers, they quickly realize that Ryan, Mike, and Joe are MIA.

Ryan hits the road and heads to the twins and Clare with Joe handcuffed in the back seat. Joe tells Ryan that when he dies, he “hopes Clare and Ryan will be happy.” He tries to get inside Ryan’s head and tells him that he and Joe are “basically the same person.” Mike and Max are driving in a separate car.

The twins take Clare to a secret mansion in the woods that no one knows their Mom Lily even owned.

While Joe and Ryan are driving down the road in the dark one of Joe’s followers rear ends them and causes them to crash, the car flips multiple times. Joe climbs out and shoots his rescuer Tim. Then he drags Ryan’s unconscious body out of the wreckage.

The next day Max and Mike are driving around trying to find the mansion the twins took Clare to. They have been blowing up his phone and he isn’t answering.

Joe and Ryan arrive at the mansion, and a note on the door tells them to come in. Despite his better judgment Ryan allows Joe to carry a gun inside, after all he did save his life from the car accident. They find music playing inside, and a room dedicated to Joe. The entire room is filled with photos and maps of Ryan and Joe. They hear Clare screaming and race downstairs to the basement, they find her handing from the ceiling, they cut her down and save her life, but then one of the twins throw a fume bomb into the basement, a cloud of smoke begins hissing out and Ryan, Joe, and Clare all drop to the floor and pass out.

Clare, Ryan, and Joe come to and the twins have them all tied up. They sit down at the dinner table with the twins, and they reveal to Joe that Emma is dead – and Clare killed her. Joe is shocked, and clearly upset. First the twins pour alcohol in Ryan’s mouth, fully aware that he is a recovering alcoholic.

Max and Mike finally arrive at the mansion, and decide to hike through the woods so that they aren’t detected on the security cameras.

Next the twins force Joe to apologize to them for hurting their mother Lily, they aren’t satisfied with his apology and they announce they plan to “dismember her bit by bit.”

Next they turn their attention to Ryan, and he confesses to them he killed their mother Lily (even though it was actually Mike). Joe begins trying to get inside the twins’ heads and turn them against Ryan. He begins filling them in on Ryan’s past and reveals that Ryan murdered his Dad’s killer, so he became a cop to redeem himself. Ryan confesses that he is a murderer and begins screaming that he failed and there is no God.

The twins escape and run off. Mike finds them in a room and reveals he shot their Mom, they jump him and are about to kill him but Max arrives and shoots one of the twins.

Clare is running through the house with her hands still tied behind her back and Joe grabs her. He pins her against the wall and tells her how much she means to him. He tells her this is the last time he will probably ever say to her and he just wants to apologize to her for everything he has ever done to her and the boys. He begs her to forgive him, and she screams that she never will. Mike, Max, and Ryan appear and knock Joe on the ground, they all have their guns aimed at him. Joe begs Ryan to kill him, but he lowers his gun and tells Mike to call Clarke and arrest him.

The cops arrive and arrest Joe. They begin canvasing the area but they can’t find Mike anywhere or Luke’s dead body. They seemed to have vanished. Mike takes Ryan aside and asks him why he didn’t kill Joe, Ryan informs him that “this needs to end.” Ryan checks on Clare and reassures him that he “did the right thing.” Ryan wants to pack a bag and head back with Clare to spend some time with her son. Clare tells him that it “isn’t going to work.” She says that they both deserve a future, and need to move on spend the rest of their lives not looking over their shoulder. Clare tells Ryan that she loves him and he needs to go “build a future for himself.” She hugs him good-bye and climbs into a police car and leaves.

Mike confesses to Max that he would have shot Joe because he isn’t as good as she thinks he is. Max laughs that she never though Mike was perfect and then he kisses her.

The police march Joe out of the house in handcuffs. Joe stops and tells Ryan that he should have killed him. He asks Ryan to visit him, but he informs Joe that he won’t be seeing him anymore, Ryan declares he will be building a new life that doesn’t include him.

Mike finally arrives at home and turns on the lights and tosses his gun on the counter. He sits down alone and eats a plate of food and then heads to bed. He has a nightmare that he is sleeping with Luke’s dead body and wakes up and realizes it is just a dream.

Meanwhile Mark is walking down the road carrying his brother’s body. A truck pulls up and he tosses his brother inside and climbs in. He tells the driver “thank you for coming I didn’t know who else to call.”