BY Amanda Austin on April 21, 2014 | Comments: one comment
Related : Recap, Television, The Following 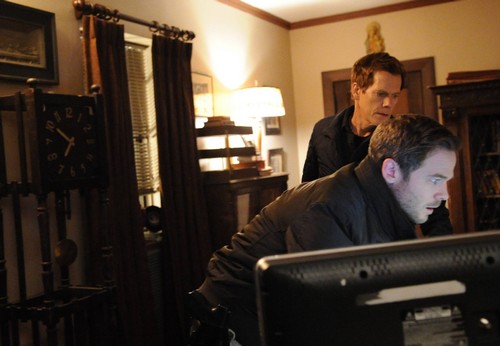 Tonight on FOX their hit psychological thriller, THE FOLLOWING returns with a brand new episode. In “Silence” Ryan and Mike are setting out to stop Joe from continuing with his current plans which threatens the lives of many. Mark and Luke try to figure out what their next move is going to be.

On last week’s episode Ryan tracked down the location of the Korban compound with hopes to infiltrate the cult and capture Joe Carroll, but all didn’t go exactly as planned. Meanwhile, Claire asked Carrie to deliver a message to Joe, and Weston made a decision that will changed the course of his life forever.  Did you watch last week’s episode?  We did and we recapped it for you right here.

On tonight’s Ryan and Mike try to stop Joe from going forward with his plan, which threatens many lives. Meanwhile, Claire makes a dangerous decision; and Mark and Luke try to figure out what to do next.

Tune in at 9PM on FOX for another exciting episode of THE FOLLOWING! We’ll be blogging it right here for you so check back in with us. In the meantime, hit up the comments and tell us your thoughts on the second season of the show!

Claire used Carrie Cook to lure Joe out of hiding. She got the journalist to read a scert poem she had created with her husband. Claire wrote it with Joe to commiserate their engagement, but as far Ryan knows – the poem is just a way of telling Joe that she’s still alive.

It seems Claire left out the part that the poem also signified where they would meet up. She purposely left that part out when Ryan refused to come aboard with her ridiculous plan of killing Joe. He told her that it was never going to work. Ryan thought Joe would be too smart and he felt that Claire was acting rashly. Yet he still left Claire alone at his apartment with arsenal of weapons.

Joe does want to meet Claire. His ex-wife was right when she said that Joe was never going to pass up the opportunity. He was too egotistical to let Claire go.

Although he claims to no longer be blinded by his love for Claire – Joe is risking a lot to go and get her. Which is why he sent Emma to do the actually picking up. He wanted someone to check the place out and so he sent his “best girl” with Robert as added protection.

But before he arrives at the appointed time to see Claire – Joe has one more grand finale up his sleeve. He sent out his followers to carry out a scheme while he also got the chance to personally deal with Pastor Tanner. The followers had concocted a way to get Tanner away from his special detail. And once they had him – they delivered him to Joe.

Joe took the Pastor to reunite him with his son. So he brought him to a catholic church his people had already commandeered. Then, in front a frightened and captive audience otherwise called the congregation, he showed the pastor what he’s been up to with his son. Joe did this to prove that Pastor Tanner’s God wasn’t real. That he never existed if the Pastor’s own son could so easily be swayed into killing someone.

Joe just couldn’t stop there though. He had to proclaim his own self-importance in front of an even wider audience. So he used a church full of hostages to win his way into getting airtime.

He wanted the Pastor to admit there wasn’t a God and then he wanted to test the man’s love for his son even further than that. Joe laid out two weapons in front of the Tanner men and told them only one of them would be spared if they were to kill the other. The Pastor chose to kill himself rather than hurt his son. So he slit his own throat.

Ryan and Mike were also inside of the church by then and they were regrettably unable to intervene.

The feds and Max have the church surrounded and with a live stream coming of what’s going on inside the church out all over the internet – it would be pretty hard for Mike to go off the deep end now.

But Mike’s position was discovered. One of Joe’s followers spotted him and quickly notified his friends. Joe told whoever was hiding that he would kill the preacher’s son if they didn’t come out. So Mike revealed himself.

And Joe was all too excited to welcome him to the party. He knew that Mike was one of the few people close enough to Ryan to matter.

Joe wanted to entice Ryan out into the open by threatening Mike’s life, but Mike didn’t want to be his pawn. He told Ryan to take the shot – even if he dies in the process. The most important thing was stopping Joe at whatever the cost.

Claire also knew that and that’s why she acted like she did. She arrived at the hotel expecting to get to Joe and instead she ran into Emma and Robert. Robert wanted to take her to Joe like planned. However Emma didn’t want Claire back in the picture. She’s become Joe’s lover and right hand man since he was forced to give up on his ex-wife. And Emma didn’t want to risk her new position so she tried to kill Claire. When Robert made an effort to stop her – she had no problem with killing him. But Emma never got the chance to follow through with the rest of her plan.

Claire managed to kill Emma. Too bad that only served to upset Mark though. He still hadn’t gotten over his crush on Emma so he wasn’t that pleased when he and his brother drove up to find Claire standing over his beloved’s corpse.

The twins wanted to get revenge for their mother’s death and Claire pretty much fell into their lap. She’s the perfect way to hurt both Joe and Ryan with one fell swoop.

And sorry, but that’s how the episode ended. The last we saw of them, Claire was with the twins and Mike had a gun to his head. The last scene in the church was completely blacked out. Someone let out a shot and the only question is who’s left standing after tonight?