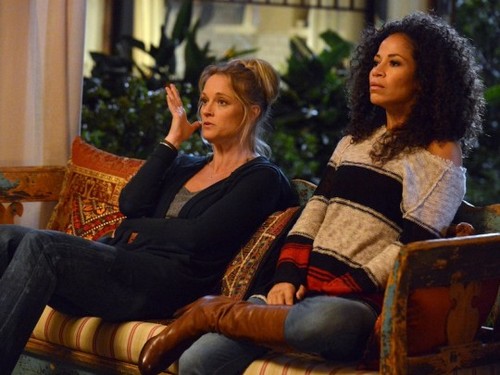 Tonight on the ABC Families their new drama, THE FOSTERS returns tonight with its winter premiere called, “House and Home.” On tonight’s show While Callie feels the harsh consequences of running away from the Fosters’ home, Brandon becomes determined to find her.  Did you watch last week’s episode? We did and we recapped it here for you.

On last show the repercussions of Callie’s decision to run away impacted every member of the Foster family, including newlyweds Stef and Lena, who had offered to adopt the troubled teen. Both Jude and Brandon struggled with their own personal guilt about her running away. Mariana inadvertently discovered the whole story about Lexi’s upcoming trip to Honduras.

On tonight’s show Callie meets Rita Hendricks (O’Donnell), a woman who works in the foster care system, and it’s clear it will take Callie some time to adjust to Rita’s no-nonsense guidance. Brandon comes clean about the reason Callie ran away and, unbeknownst to Stef and Lena, he sets out to track her down. Meanwhile, Mariana volunteers to help with the school play in order to impress a cute boy (Clayton), but when she gets paired up with an old “friend,” it could spell trouble. Jesus’ meds are having concerning side effects, and he’s desperate to find an alternative to taking the pills. Mike suggests he participate in contact sports to help relieve his aggression, and Jesus tries out for the wrestling team.

Tonight’s season 1 episode 12 is going to be an exciting one that you won’t want to miss, so be sure to tune in for our live coverage of ABC Family’s The Fosters tonight at 9 PM EST! While you wait for our recap hit the comments and let us know what you think of The Fosters season 1 this year. Check out the sneak peek video of tonight’s show below, while you wait for the recap!

Tonight’s episode begins with Kelly meeting with her social worker. He questions why she is getting in trouble again when things were going well. She tells him she doesn’t care what happens to her, as long as her little brother stays with the Fosters. At the house, Stef, Lena, and the kids talk about what’s going to happen with Callie. Brandon asks if they can go to court, Stef says Callie doesn’t want them there. Brandon finally shares that Callie ran away because he kissed her. Stef and Lena talk to Brandon privately about the incident. They tell him that CPS could take Callie and Jude away if they find out what happened. Upstairs, Marianna and Jesus confront Brandon about kissing Callie. Marianna says he is going to tear the family apart. She leaves, and Jesus tells Brandon that he agrees with Marianna. Downstairs, Lena and Stef are discussing the situation when Jude appears. He feels guilty for not telling them about Callie and Brandon, and feels responsible for Callie running away. They assure him that’s not the case. The next day, Callie goes to court. Stef and Lena tell the judge that while Callie progressed well in their home, they don’t feel they can have her back in their home at this time.

At school, Marianna is recruited by a cute senior named Chase to audition for the school play. Meanwhile, Brandon and Thalia are running lines, when he decides to break up with her. She asks him if it’s because of Callie, begging him to be honest. He admits that Callie is the reason. Later, Marianna shows up to audition for the school play. She is greeted by Zack, who is a designer for the play. He is unimpressed with Chase, unlike Marianna. He pairs Marianna and Chelsea together to work on costumes. Marianna and Chelsea argue over working with each other. Back at the house, Lena and Stef tell Brandon that Callie isn’t coming back home. They tell him that Callie is going to a high-risk group home. He is upset and wants to see her but, of course, Stef and Lena object. He tells them that he and Callie are in love and nothing will change that.

Callie arrives at her new group home, ran by Rosie O’Donnell, I mean Rita. Rita shows Callie to her room. Callie is surprised there are no bars or locks on the doors to keep the girls from running away. Rita tells her that they trust the girls won’t do anything to violate the group home’s trust, because they will go back to juvey if they do. Callie attends her first group session at the home. The girls introduce themselves one by one to Callie. Rita informs Callie of their no-tolerance policy for violence. Then Callie has to introduce herself.

Back at the house, Brandon tries to talk to Jude but the boy doesn’t want to hear what he has to say. Brandon searches the Internet to find the group home that Callie went to. Meanwhile, Mike and Jesus play basketball while Stef asks Marianna about the school play. At the group home, Callie has her first cleaning duty with the other girls. The other girls exchange barbs at one another while Callie keeps quiet. Callie is uncomfortable with a girl she met in juvey who beat her up. The girl tries to make peace with Callie, but Callie isn’t having it. Dad has a talk with Brandon about Callie, he tries to convince Brandon to forget about her. He tells Brandon that Callie wasn’t planning on being with Brandon, that she was trying to go to Indiana to stay. Callie prepares for her first night at the group home. She and her roommate get to know one another and learn they have something in common-they both have brothers. Rita stops by to check on Callie. Callie asks her what her job is, Rita says that basically she’s the referee for the girls in the home. Callie’s roommate gives her advice on how to get the girls to agree to give her the privilege to see her little brother. At the Foster house, Jude comes to Marianna’s room to ask if he can have Callie’s pillow. She asks Jude if he wants to sleep in Callie’s bed tonight. He does, making them both happy.

Marianna and Chelsea shop for costumes for the play, but Marianna is nervous that Chelsea will shoplift. While Marianna is trying on a dress, Chelsea shares that she thinks Chase is “hot.” When the girls leave the store, they are stopped by a security guard who wants to check their bags. Chelsea looks nervous. Back at the home, the girls have another group session. One of the girls shares that she wants to get high, and that she was molested when she was younger. Rita asks her what she wants to be when she grows up, the girl says she wants to be happy. Another girl asks Rita if she’s ever had any problems. Rita tells that she used to smoke a little pot and she tried speed. She then shares that she’s addicted to food. One of the girls asks Callie what her addiction is. Callie says she really doesn’t know, that she feels like she has to say she’s addicted to something so she can get privileges. They ask why she ran away, she says it’s because of her foster brother. They ask if she wants her privileges so she can see him, she tells them, no, it’s because she wants to see her little brother to explain why she left. The girls agree to give her privileges. Later, Jude is in Marianna’s room, discussing his upcoming visit with Callie. Marianna finds a hat she didn’t pay for in her bag. At the group home, Callie walks in on the lesbian girl taping her breasts down. The girl freaks out and breaks the shower door. Rita questions the girls about what happened. Both girls deny any fighting. Rita decides to make the two girls roommates, much to their dismay.

The next day, Jude is dressed in a suit, ready to visit Callie, when Stef and Lena tell him that Callie lost her privileges and can’t visit with him today. They offer to take him out for the day, just the three of them, but he says he has homework. It’s clear he’s disappointed but Stef and Lena can’t help him. At play practice, Marianna confronts Chelsea about the hat when Chase appears and spots the hat. He is impressed and says it defines his character. He thanks Marianna for the hat and walks off. Chelsea smiles and tells Marianna she can thank her later. At the group home, Rita invites Callie and her new roommate, Cole, down for snacks. Cole goes downstairs, leaving Rita alone with Callie. Rita tells Callie she’s sorry that Callie couldn’t see her brother. Then, Callie spots Brandon standing outside across the street from the home. She runs outside and jumps in his arms as Rita and the group home girls look on from the porch.