BY Kristine Francis on February 17, 2014 | Comments: one comment
Related : Recap, Television, The Fosters 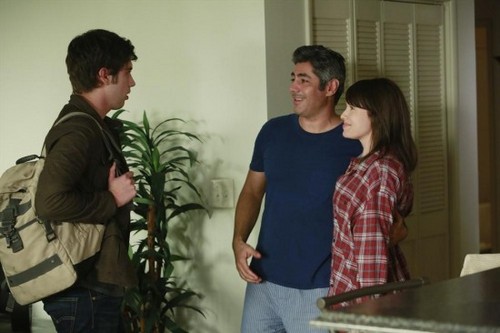 Tonight on the ABC Families their new drama, THE FOSTERS returns tonight with its winter premiere called, “Us Against The World.” On tonight’s show Brandon and Callie adjust to new living arrangements. A scavenger hunt for Jude.  Did you watch last week’s episode? We did and we recapped it here for you.

On last episode recent events brought up painful memories for Callie and Jude and made Callie questioned what is most important to her. Stef is flustered by a discovery about Lena and Mike were troubled by new developments in the shooting investigation. Meanwhile, Jesus’ long distance relationship with Lexi was complicated by his growing bond with his wrestling teammate, Emma. The episode was directed by Millicent Shelton, with the story written by Tamara P. Carter and the teleplay written by Bradley Bredeweg and Peter Paige.

Callie sets her sights on a brighter future, and Stef must make a decision that could threaten her job in a new episode of “The Fosters,” airing Monday, February 17th, at 9:00 p.m. ET/PT on ABC Family. Callie makes a life-changing leap in order to better her future and earn back the trust of her loved ones. Brandon makes a move of his own, much to Callie’s disappointment. Stef is called to testify in Mike’s case and is faced with a decision that could mean losing her job. Meanwhile, Jude unravels a mysterious message, and Mariana makes a bold move to win Chase’s attention. – Brandon and Callie adjust to new living arrangements. A scavenger hunt for Jude.

Tonight’s season 1 episode 16 is going to be an exciting one that you won’t want to miss, so be sure to tune in for our live coverage of ABC Family’s The Fosters tonight at 9 PM EST! While you wait for our recap hit the comments and let us know what you think of The Fosters season 1 this year. Check out the sneak peek video of tonight’s show below, while you wait for the recap!

On tonight’s episode, Callie is returning home. She chose to go home to the Fosters and get adopted alongside Jude. Yet as her new found friends at group point out – her return won’t be easy as she thinks. Mainly because Callie has to deal with Brandon on a regular basis. It’s easy to say she’s over him right now with the distance between them but living together will be a whole different story.

And unlike how it would have been when she first arrived, Callie is finally able to listen to their legitimate concerns. She understands her return is going to be difficult and knows it’s still the best option for herself. She gets to go home to a family that loves and not everyone gets that chance. Daphne is also leaving the group home. Only she’s going to live on her own and while that sounds like a nice fantasy; Callie knows she can’t pick it.

Luckily her living situation improved without her even knowing. Brandon and the rest of their family held the truth from Callie up to the last minute. It seems Brandon thought it would best to live with his dad for a while. Just until Callie gets readjusted back home. He assured her that he needed the move for him and that it wasn’t her fault.

But a lot of thing is starting to look like her fault. Although Callie went back with the knowledge she had to earn everyone’s respect; she didn’t count on Jude being part of that group. Jude is distant with her. She hurt him when she left him the way she did. And it’s going to take more than simply checking in like she has to do with Stef and Lena to reassure him that she’s not going to up and run away again.

Callie figured out the best way to get Jude’s trust back is to celebrate his real birthday like they used. Their mom had Jude at home and when she got around to registering him; he was given the wrong birthday. The foster system never found out and ever since he and Callie have been celebrating his birthday privately. At first Jude was stump over why he was getting mysterious gifts. The he realized it was a puzzle. Apparently Callie knows him so well that he’s on his way to forgiving without even realizing it.

In the meantime, Brandon’s new accommodations are at risk. His dad has got a new friend. As in one with benefits even though his AA meetings warned him about starting something new this early in his sobriety. On top of that things aren’t going so well with Mike’s trial. Stef received a subpoena to testify in open court. Now they want to ask her about that night when she knows she gave a false statement way back when. So either she lies under oath or finally decides to tell the truth. Sounds nice but it will risk her job. There’s no way the police department will keep her on after she lied about a shooting.

In the end, Stef chose honesty. She admitted to the DA during questioning that she lied in her earlier testimony. While she’s telling the truth, Brandon decided to use underhanded methods to convince Jesus and Mariana’s birth mom to lie. He points out to her that she can’t testify. Because if she did then her children will know that she left Stef bleeding on the floor just to get more money out of Jesus. The twins will never be able to forgive that.

That’s why it’s for the best if she didn’t testify and to make sure the District Attorney don’t threaten her food stamps – Brandon gives her a lot of money. It’s not a bribe though. He merely wants to help her through a tough time.

It wasn’t a great surprise that the former junkie chose money over the truth. She’s no Stef. Stef told the truth and managed to keep her job. Her boss did warn her though. Neither Stef nor Mike can have even a hint of impropriety attached to them from now on.

Well, that’s going to be hard! Where did Brandon get so much money from? His dad gave it to him for piano lessons without knowing that Brandon quit several weeks ago. In other words, Mike involuntarily paid off a witness for his own trial. And the only person that knows Brandon quit piano to begin with is Mariana. Brandon was able to put her off with a whole bunch of lies. Not that she had the capacity to see through him anyway.

Mariana got caught up in getting the guy of her dreams that all she served to do was make a fool of herself. She also risked her friendship with Zach. He was trying to tell her his true feeling and she basically ignored him.

Brandon has to get his dad’s money back and one bad decision tends to lead to another. He’s going to sell exams to the student body. He rather steal his mom’s keys to the Vice Principal Office than tell anyone he blew through Mike’s money. He knows they won’t be satisfy with an “I’m sorry”. They’re going to want him to confess what he spent it on.

Brandon is on a downward spiral but is he going to take Callie with him. Callie had shared Jude’s secret birthday with the rest of the family and their lives are just starting to look good. So why did Brandon have to get jealous? He admitted to Talya that Callie left because of him and not for Wyatt.

Now the whole school knows thanks to the woman scorned!