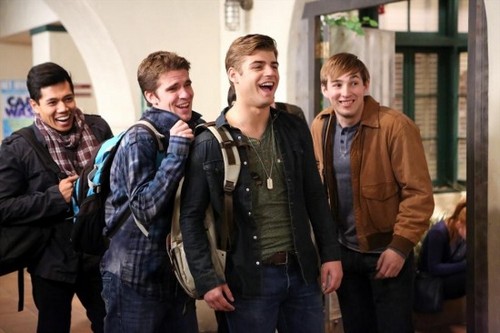 Tonight on the ABC Families their new drama, THE FOSTERS returns tonight with a new episode called, “Kids in the Hall.” On tonight’s show good intentions put Callie in a bind with a friend and set Brandon on a path to trouble. Did you watch last week’s episode? We did and we recapped it here for you.

On last week’s episode Callie sets her sights on a brighter future, and Stef had to make a decision that could threaten her job. Callie made a life-changing leap in order to better her future and earn back the trust of her loved ones. Brandon made a move of his own, much to Callie’s disappointment. Stef was called to testify in Mike’s case and was faced with a decision that could mean losing her job. Meanwhile, Jude unraveled a mysterious message, and Mariana made a bold move to win Chase’s attention. – Brandon and Callie adjusted to new living arrangements. A scavenger hunt for Jude.

On tonight’s episode a good deed puts Callie in an awkward situation with a friend.  Callie finds a way to use her photography skills for a good cause, but it unintentionally leads to trouble for someone she cares about. In an effort to clear his own conscience, Brandon makes a deal with an unscrupulous classmate and finds himself in over his head. Mariana deals with the unwelcome consequences of her stunt to earn Chase’s affection, and tension comes to a head between Jesus and Emma during a wrestling match. Meanwhile, Stef and Lena contemplate another big step for their family.

Tonight’s season 1 episode 17 is going to be an exciting one that you won’t want to miss, so be sure to tune in for our live coverage of ABC Family’s The Fosters tonight at 9 PM EST! While you wait for our recap hit the comments and let us know what you think of The Fosters season 1 this year. Check out the sneak peek video of tonight’s show below, while you wait for the recap!

The principle of the kids’ High School is worried about Callie. She noticed that Callie hasn’t joined any groups or teams and feels like her participation would help her assimilate to her life with the Fosters. It might even help her to not run away again if she has more roots at the school. Lena wants what’s best for Callie however she didn’t like the idea that anyone was thinking she and Stef couldn’t handle Callie as part of their. But the principle did point out that out of all of their kids the only one that hasn’t come close to failing or had gotten suspended was Brandon. He appears to be the most normal one.

The normal one though is busy stealing his mother’s keys to her office. Sure he needs to make back some extra cash to pay off his father but he accepted a fake ID much too easily. What is planning to do with it anyhow?

Callie on the other hand is still proving to be a model citizen since returning. She even helps out Mariana. Last week Mariana had foolishly ditched her friend, Zach, just to spend time with the boy she had a crush on. Too bad he was jerk then and is a jerk now. He told everyone at school about her putting her underwear in his pocket. And in his version of events they hooked up. That’s not the truth but who’s going to believe her.

Callie is keeping her friendships with Kiara and Daphne. They got close during their time together at the outreach house. And now they’ve helped her see what she couldn’t before – Callie has a talent with photography. She took a picture of Kiara and it helped her friend find a decent foster family. So Callie wants to pursue taking more pictures to help out foster children and while Lena is pleased by this; Stef is hoping she’ll make better friends from the venture. She wasn’t feeling too comfortable finding two juvenile delinquents in her kitchen.

Brandon’s new friend, Vico, is the real bad influence. He took Brandon out to a bar. Then after hearing about all of his troubles with Callie, Vico offered to be his wing man. The only thing that stopped Brandon from going home with some random stranger was running into his dad’s girlfriend. The very same woman, Mike met through AA meetings.

It was later on that Brandon began to worry about more than himself. Brandon is scared the girlfriend might hurt his dad’s s chance at sobriety. Mike has fallen off the wagon before and he doesn’t want that to happen again.

Jesus and Emma have grown closer. Some might even say that they are each other’s best friends. But all of that can easily get ruined with one little wrestling match. It’s hard for a girl to be on the wrestling team and it gets harder when she has to overpower a friend. They both weighed in around the same so their coach asked them to duel it out on the mat to see who would be representing their high school come competition day.

Jesus was winning and then he abruptly threw the game. He allowed Emma to win and that only made her mad. She didn’t want to be handed anything and out of frustration or possible hidden feelings – she kissed him! There goes the chance of him not seeing her as a girl.

Both Callie and Mariana are having a rough time at school. Callie can’t make any new friends because Talia has already poisoned the water. As for Mariana, she has to deal with Chase and his friends stuffing his underwear in her locker. Lena and Stef found about it and were forced into having a talk with her. Panties aren’t the best way to tell a guy you like him.

And neither is an uncomfortable dinner. Soon after teaching Mariana the difference between interests and pushing things too far, Lena invited her co-worker to the house for dinner. Coincidentally it was the same night Stef invited Mike and his girlfriend around as well. So the women decided to make dinner party out of it.

Stef was busy interrogating that she found it odd that Lena wasn’t on the same page. She found a moment alone with her wife and demanded an answer. Lena isn’t generally fawning over just anyone and when Stef asked her on it; Lena explained how she thinks she found the perfect sperm donor. They’ve been discussing what kind of donor they want like if he should be black or white but none of that matters now. At least to Lena. Timothy is highly educated and she likes him as a person.

The very same night Callie is taking pictures for the foster kids, a couple of e-readers were stolen. Callie thought Daphne had did it seeing as her friend has been struggling with independent living. And that’s why she lied to Lena by saying she didn’t give the keys to anyone. Yet she still confronted Daphne and got yelled at. Daphne swears she didn’t steal anything and if someone committed a crime then it was probably Brandon.

Daphne swears she saw him that night. Brandon on the other hand denies being there. He tells Callie he was too busy with the family dinner to stop by at the school. Sadly, he’s lying. Callie was buying his story all the way to catching sight of his car in one of her photos taken that night.

He let Vico in to use the facilities and his friend betrayed him. He went outside of their plans to make some extra money. When Brandon found out what he did he told Vico to return the items or get anonymously turned in.

Guess Vico isn’t as great of a friend as Zach. He was upset with Mariana ditching him but chose to help her get some pay back. He wrote a terrible review of Chase’s play and let it go to print. He never lliked the way Chase was targeting to her and he’s all too willing to let bygones be bygones between him and Mariana.

That’s a good friend! Almost like Daphne was before Callie lost her due to Brandon’s actions.