BY David Lee on March 17, 2014 | Comments: one comment
Related : Recap, Television, The Fosters 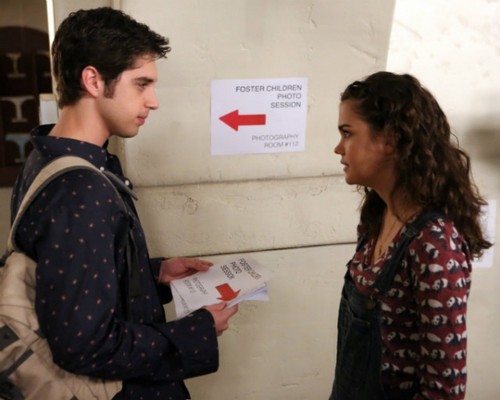 Tonight on ABC Family their hit drama THE FOSTERS returns with a new episode called “Metropolis”. In it the Foster teens get ready for their school’s winter ball. Meanwhile, Callie’s old friend tries to reconcile with her; a past mistake haunts Brandon; Ana delivers some troubling news to Stef; and Zac’s mother seeks a conversation with Lena.

On the last episode an encounter with her father (guest star Jamie McShane) left Callie conflicted about her future and worried about the effect the reunion would have on Jude. Meanwhile, Jesus struggled to maintain his focus at school without his ADHD medication, and Mariana got an unexpected invitation from Zac’s mom (guest star Romy Rosemont). Lena and Stef came to a major decision with the help of a good friend.  Did you watch last week’s episode of ABC Family’s hot new show? If not then check out our detailed recap of it right here to get caught up on all of the action.

THE FOSTERS has really grabbed a huge fan base in precious little time and you’re not going to want to miss “Metropolis” so tune in to ABC Family tonight at 9PM EST to watch this blended family continue to grow together.

We’ll be live blogging it right here for you as well so check back and join in the conversation. In the meantime, hit up our comments and tell us your thoughts on the first season of THE FOSTERS up to this point!

The episode starts with Callie and Brandon at school in the music room. They talk about everything that has happened. With his parent’s adopting all of these children and his love for music coming back. After she leaves the music room, Callie receives a call from an old friend. Shen then turns around and there he is. They talk about him living in Indiana and what happened in the hotel that night when he left. Meanwhile back in class, Jesus asks a girl who was trying to tutor him to the winter dance, but she turns him down because she already has a date. He is struggling with his work since he is no longer taking his medication. Back in the hallway at school, Marianna sees Zach’s mom who is going to volunteer at the school dance.

Zach approaches both of them. When his mom leaves, he and Marianna are talking. It is clear that Marianna wants Zach to as her to the dance, but he appears to be afraid and chickens out. Meanwhile at her work, a lady approaches Stef Foster about the night her partner killed Evan. She said that Stef’s son paid her off to lie; she said that if Stef doesn’t give her ten thousand dollars that she would go to the district attorney and rat them out. Stef refuses to give her the money and if she asks again she will arrest her for bribing and officer.

The episode picks back up with Jesus working out in his room. He wants to stay fit for when he gets back on the wrestling team. Stef comes in and says that his teachers are concerned about his erratic behavior. She asks him if he is sure he wants to still stay off of his meds. He says yes. She then asks him if she has had any contact with Ana since that day at the hotel. He says no. She tells him if he or anyone else does, that they need to contact him immediately. We then see Marianna and Callie in their room. Callie tells Marianna that she should ask Zach out because it appears that he may be a little gun shy after some of their previous encounters. The episode then shifts to Lena and Stef talking about Wyatt coming back to see Callie. They are not sure how to feel but decide to accept it for now. They then talk about the separation between them and Stef makes a wise crack about the insemination last week being not very intimate at all. The episode then shifts to Brandon at his dad’s house and his dad’s girlfriend. The girlfriend says that if he wants Callie back he needs to tell her now before that Wyatt guy takes over. The episode then shows Wyatt accepting a text from Callie and him sleeping in his car.

The episode returns with Wyatt getting his car towed when he was in the bathroom. We the see Marianna with Zac. She was going to ask him out when he showed her a card that pictured him in a suit. It was his way of asking her to the Winter Ball. Brandon sees Callie and invites her to come over after school. When she was finished talking to Brandon, she heard over the intercom that she was nominated for Spring Queen. She realizes that it is a joke from some of the kids who are mean to her. When she meets Wyatt that day they talk about the nomination and how it is cool if she was to go along with it and act as if it didn’t bother her. He also tells Callie that he doesn’t have a place to live after his car got towed. She then took him to her friend from the last episode. The one she met in juvy. She allows him to stay with her. Meanwhile Brandon is at home preparing a love song for Callie, but she texts him saying that she would not be able to make it. At dinner that night with the kids, Lena tells Callie that the principal did not give her a good report to her parole officer. She said that Callie was very antisocial and did not talk to the other kids. They all want Callie to go to the formal just so she can rise above all of the hateful kids that nominated her as a joke.

The episode continues with the winter dance in full swing. Jesus doesn’t have a date, but he is eyeing his math tutor and her date. Callie shows up to talk to Wyatt whom she got a job filling drinks so he could get money to get his car back. Lena and Zach’s mom are counting ballots for the winter queen and king. Lena then goes to Brandon and tells him to ask Callie to dance so the principal will see she is participating. Jesus tries talking to the girl he is getting math help from, but she sees through his erratic behavior without his meds and she walks away. Brandon asks Callie to dance, and they dance. Meanwhile back in the bathroom there are kids drinking alcohol illegally. Marianna and Zach are dancing when Zach’s mom cuts in to dance with Zach. She accuses Zach of screwing Marianna before running off. The episode then swings back to Brandon and Callie who says she is tired of being judged by everyone. He agrees but it is because he is mad that she did not meet up with him the other day. They talk about being together, but she really wants a family; and, when she is adopted by Lena and Stef, technically Callie and Brandon would be brother and sister. She does not want to mess up the family dynamic by dating her foster brother. He then tells her to tell him something to make him get over her. She tells him that when she and Wyatt ran away together, that they slept together.

The nominees for Winter King and Queen are then announced. Callie wins the Winter Queen title and is forced to dance with another guy. Meanwhile Marianna and Zac leave to go look for his mom. The principal then goes into the bathroom to find kids drinking alcohol. She asks where they got this from and everyone says that Callie gave it to them so they would vote for her. The principal then goes and accuses Callie of buying alcohol with a fake id. Back on the dance floor, Jesus gets into a fight with his tutor’s boyfriend because he thinks he is going to drink and drive. It turns out she was driving and she tells Jesus to get lost. Zach and Maria find his mom. She is outside looking at the water, but when they get to her, she doesn’t recognize either of them.

Brandon then goes to the principal and the police to tell them that he was the one with the fake ids and alcohol because he was trying to get back at Callie. He said that he thought that they felt the same way, but obviously she did not care about him as much as he cared about her and he was hurt because of that. Stef then told the police to arrest him. After he is taken away, Callie then realizes that it was Brandon’s friend trying to get back at him through Callie. She tells him as he was getting into the police car that what she said about her and Wyatt wasn’t true. At the police station, Stef and Brandon’s dad grill Brandon about what really happened. He says he bought the fake ids and booze because he needed the money. But he realized what he was doing was wrong so he bought them back. He said that he needed the money to pay his dad back for piano lessons, because the money he had to pay his dad went to Ana. He payed off Ana, the lady who approached Stef for ten thousand dollars, so she would change her testimony and they would not have to go to trial. This was the end of the episode.