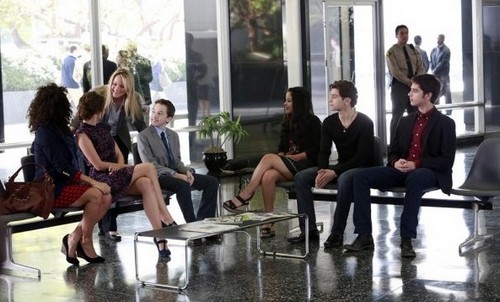 Tonight on ABC Family their hit drama The Fosters returns with a new episode and the season 1 finale called “Adoption Day.”  In the first season finale evastating news is revealed to the Fosters as Callie and Jude prepare for their adoption. Meanwhile, Mariana stands by a friend who faces a hard decision; Brandon makes another poor choice; and Jude is asked out on a date.

On the last episode the Foster teens got ready for their school’s winter ball. Meanwhile, Callie’s old friend tried to reconcile with her; a past mistake haunted Brandon; Ana delivered some troubling news to Stef; and Zac’s mother sought a conversation with Lena.   Did you watch last week’s episode of ABC Family’s hot new show? If not then check out our detailed recap of it right here to get caught up on all of the action.

On tonight’s episode Stef and Mike are faced with the repercussions of a shocking revelation, and the fallout could destroy lives and relationships. Callie contemplates her upcoming adoption and Brandon’s frustration leads him to make another regrettable decision. Mariana supports a friend with a difficult decision, and Jesus resolves to make a change for the better as he manages his ADHD. Jude gets asked out on a date. The episode was written by “The Fosters” Executive Producers Bradley Bredeweg and Peter Paige and directed by Norman Buckley.

We’ll be blogging it right here for you as well so check back and join in the conversation. In the meantime, hit up our comments and tell us your thoughts on the first season of THE FOSTERS up to this point!

The season finale of The Fosters opens with Brandon in the back seat of the cop car with his Mom and Dad. Brandon confesses that he bribed Anna, and his parents tell him he can’t tell anyone what he did.

Mike and Stef get out of the car and discuss their options. Stef tells Mike to stay as far away from Anna as possible and says “she will handle it.” Then she adds that Brandon has to move back to her house.

Mike goes home and kicks his girlfriend Dani out, he blames her for Brandon’s misbehavior.

Stef heads home and tells Lena that Brandon is moving home, and fills her in on the fake ID’s. She leaves out the part about him bribing Anna. Lena confesses that she is pretty sure the principal is going to expel Brandon.

Mariana heads over to Zack’s house, his Mom answers the door and remembers Mariana’s name and acts as if nothing happened the night before. Zack steps outside and talks to Mariana. He confesses to her that his Mom has early on-set of Alzheimer’s Disease.

Stef pays Anna a visit and tells her to meet her at the diner tomorrow, she is going to pay Anna the $10,000.00 she wants as long as she stays away from her family.

Jesus fills Mariana in on what happened at the dance, when he flipped on Kyle. Mariana encourages him to get back on his medicine, she wants her brother back.

Brandon starts packing, he apologizes to his Dad for everything that he did. Mike tells him he has never been this disappointed in him before.

Lena meets with her sperm donor, and he reveals that he is not going to sign the donor contract. He can’t stand the idea of having a child in the world that he isn’t allowed to see or talk to. Lena is panicked-she stops at urgent test to get a pregnancy test since they already inseminated with his sperm. She has to wait 24 hours to find out whether she is pregnant, she heads home and fills Stef in on what happened with the sperm donor. Stef confesses to Lena that she doesn’t want her to have a baby.

Callie visits Brandon at his Dad’s house. She tells Brandon she wants to be a part of this family more than she has ever wanted anything, but she needs to know that being adopted isn’t going to hurt him, because adoption day is tomorrow. He reassures Callie that he is okay with her being adopted and becoming her brother.

Lena announces to Stef that she just got her period, so Stef has nothing to worry about. Stef apologizes to Lena for what she said, Stef admits that she is nervous about bringing another baby into the world because their lives are so messed up right now. She fills Lena in on Anna’s blackmail.

Dani arrives at Mike’s to get some of her stuff, and Brandon is drunk on the couch, upset because Callie is over him. Dani puts him to bed, and then joins him, and seduces him.

Brandon wakes up in the morning, and Dani is gone. He has a voicemail from his Dad, who is obviously drunk, and crying about how sorry he is. Brandon calls Dani and leaves her a voicemail asking her if she has seen his Dad. Brandon heads to his orchestra audition, and still has no idea where his Dad is.

Jesus tracks down Emma at school and tells her that he is back on his meds and apologizes for the way he behaved. Emma reveals she is no longer dating Kyle, and agrees to give Jesus another chance.

Jude has a date with a girl from school named Maddy. His friend Connor wanted to go out with Maddy, but it made Jude jealous that Connor liked someone else and not him. Jude sits down with Lena and asks her how she knew when she was gay. He is scared because he got jealous of Maddy, he wanted Connor to like him like that. Lena reassures him that there is nothing not normal about him, and if they love him regardless of whether he is gay or straight.

Mariana heads over to Zack’s house, and he has a huge bruise on his face. His Mom lost her memory again, and didn’t know who Zack was and attacked him. Mariana convinces Zack to call his Dad and ask him for help with his Mom.

Stef heads to the diner to meet Anna and she never showed up. She asks someone at the shelter where she stays if they know where Anna is and the supervisor says someone seen her get in a screaming match with a guy yesterday and no one has seen her since.

Meanwhile Dani has found Mike. She has him in the bathroom and is trying to wash the blood off his hands, he is passed out drunk. She asks him if he was “in a fight.” Obviously he doesn’t answer her- he’s barely conscious.

It’s finally adoption time. Stef arrives at the court house, Lena is sitting with Callie and Jude, Brandon, Mariana, and Jesus, and waiting to see the judge. Lena takes Stef aside and reveals Brandon wasn’t suspended, and then she tells her that she is pregnant. (She didn’t get her period-she was just spotting.) Stef bursts into tears and says she’s not upset, she is happy they are having a baby.

Wyatt arrives and brings her old counselor and all of her friends from the group home to support Callie on adoption day. Jude’s friend Connor shows up, despite their fight over Maddy to support Jude as well.

The judge comes out and takes Stef and Lena aside. They tell Callie that when the judge pulled Callie’s original birth certificate it had a different name on it than Donald, her father was listed as a man named “Robert Quinn.” She can’t be adopted today because now they have to track down Robert Quinn and get him to sign over his rights. Callie tells Jude and Stef and Lena to go through with Jude’s adoption today even though they can’t adopt her.

Callie storms out of the court house in tears, Rita follows her and gives her a pep talk about not giving up. Callie and Rita head back into the court room and support Jude while he is adopted, Jude is officially a Foster. The whole family heads home to celebrate after court. Callie reassures Lena that she is okay, even though she didn’t get adopted.

Wyatt sits down with Callie outside and asks her if not getting adopted “changes anything” about her relationship with Brandon. Callie reassures Wyatt that it changes nothing and then kisses him.

Brandon arrives at Mike’s house to get the rest of his stuff, and when he climbs out his car he is jumped by Vico and beaten unconscious.